A Nation at Risk argued that much of America’s decline in academic achievement could be traced to the “cafeteria-style curriculum” or “curricular smorgasbord” offered to high-school students. The report said that the presence of so many nonacademic courses in the curriculum-such as preparation for adulthood, off-campus work experiences, and physical and health education-was compromising America’s commitment to high-quality academics. This, the National Commission on Excellence in Education, was the result of society’s placing a “multitude of often conflicting demands” on the schools, which were asked to solve “personal, social, and political problems” that the home and other social institutions were failing to fix.

Risk charged the larger society with the sin of burdening schools with so many nonacademic responsibilities. Yet it appears at least as likely that the schools eagerly took on these burdens.

Bureaucracies like to grow, to widen their mission, to take on more duties and thereby expand their budgets and influence. That’s as true of public schools as of any other agency. The “comprehensive” high school, for example, could grow ever more comprehensive by offering more courses, many of them nonacademic.

This was not just a bureaucratic imperative; it also followed the thinking of progressive educators, who viewed the 19th-century high school as elitist, dominated by the wishes of college officials. Progressive educators believed that in order to make high schools more “democratic” they needed to provide most students a different curriculum, one that included a multitude of practical, problem-solving courses that were supposedly “relevant.” 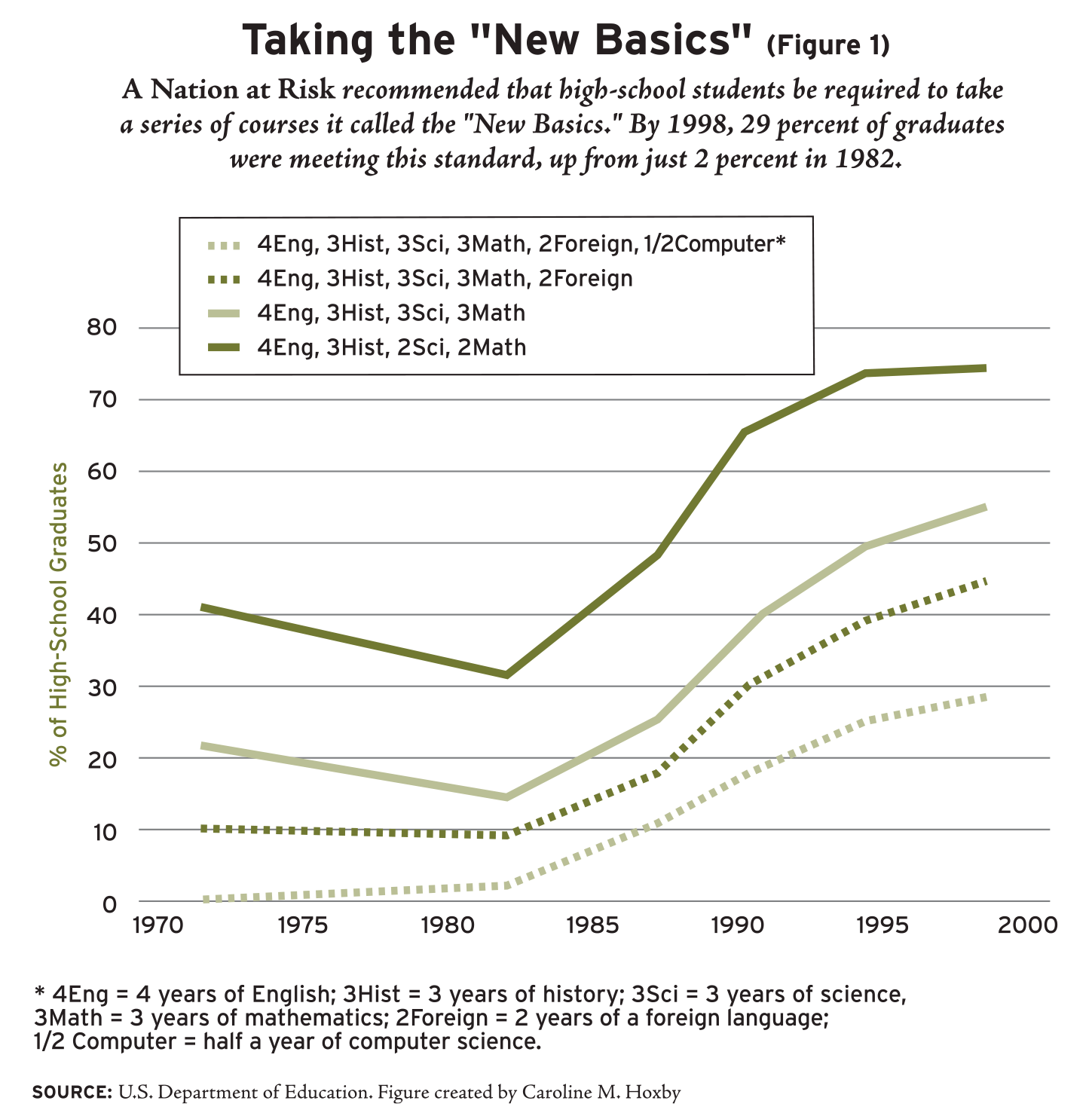 The commission’s antidote to the curricular smorgasbord was to recommend that all high-school students be required to take a set of courses called the “New Basics.” The New Basics required every prospective graduate to take a minimum of four years of English, three years of mathematics, three years of science, three years of social studies, and half a year of computer science. College-bound students were also advised to study a foreign language for at least two years.

High schools responded favorably to this admonition, at least superficially. The share of students completing the New Basics rose from 2 percent in 1982 to 29 percent in 1998 (see Figure 1). If you put aside the computer-science requirement, the increase was from 10 percent to 44 percent.

Completion rates for specific mathematics and science courses increased dramatically as well. The percentage of high-school graduates who took Geometry increased from 47 percent to 70 percent; the rate for Algebra II rose from 40 percent to 62 percent; and for Precalculus, it went from 6 percent to 23 percent. Less substantial increases were seen in Chemistry, Physics, and Biology (see Figures 2 & 3 in Caroline Hoxby, “Reforms for Whom?” p. 47).

Such notable gains in academic course taking should have resulted in impressive gains in achievement. However, as Paul Peterson shows (see “Ticket to Nowhere,” p. 39), long-term trend data from the National Assessment of Educational Progress (NAEP) reveal only small increases in mathematics and science scores after 1982, when scores for 17-year-olds reached their nadir.

Even more worrisome is the fact that these achievement levels on NAEP are considerably lower than would be expected from students who are taking rigorous academic classes. Consider the performance description for students scoring 350 on the NAEP mathematics scale-a score well above the average achievement level:

Students at this level can apply a range of reasoning skills to solve multi-step problems. They can solve routine problems involving fractions and percents, recognize properties of basic geometric figures, and work with exponents and square roots. They can solve a variety of two-step problems using variables, identify equivalent algebraic expressions, and solve linear equations and inequalities. They are developing an understanding of functions and coordinate systems.

This definition does not describe work at the Precalculus level or even the Algebra II level; it more closely resembles the less difficult content from Algebra I and Geometry. Yet even the average among top-quartile students in the United States has never reached this level.

The relative weakness of even our most advanced students is confirmed by scores on the advanced physics and mathematics components of the 1995 Third International Mathematics and Science Study (TIMSS), which is administered only to students who have taken these courses. In physics the United States scored significantly lower than 14 of the 15 participating countries; in advanced math U.S. scores were significantly lower than those of 11 of 15 participating countries. On neither exam was the U.S. score significantly higher than that of any other nation. Nor did we register any improvement from the Second International Mathematics Study, conducted in the early 1980s.

These divergent trends-simultaneous increased enrollment in academic courses and stagnant achievement-suggest an hypothesis: in order to accommodate a wider range of student abilities and previous attainments in academic courses, the content of those courses has been diluted. This may be the inevitable consequence of policies that stress uniform academic treatments for all students.

First consider evidence from studies of curriculum and textbooks. The serious deterioration of textbook content appears to have begun in the 1960s. The late Jeanne Chall and Sue S. Conard studied widely used textbooks covering the period from 1945 to 1975 and noted, “On the whole, the later the copyright dates of the textbooks for the same grade, the easier they were, as measured by indices of readability level, maturity level, difficulty of questions, and extent of illustration.”

There is reason to believe that curriculum materials have continued to weaken since the publication of Risk. The so-called “math wars” were prompted by the release of newer texts seen as grossly inadequate because of their deemphasis of rich content. The unchallenging curriculum stimulated the growth of parent-led protest organizations such as HOLD and Mathematically Correct. Many of the offending new mathematics programs were sponsored by, of all institutions, the National Science Foundation.

For instance, one of these programs, the Core-Plus Mathematics Project, was found by a reviewer to have “generated massive resentment among the students who were the experimental subjects during early implementation. Many students found themselves ill prepared for college, even though they came from highly educated homes and had a high likelihood of success.” Just one example of the sheer vacuity of Core-Plus is that it had no section at all on factoring polynomials.

Another measure of the degree to which high-school academic courses have been watered down is provided by achievement scores in districts and schools where more children are taking academic courses. Consider data on algebra enrollments and achievement from California. There is a negative partial correlation of .67 between enrollment and achievement among individual schools in 8th-grade algebra, meaning that high enrollment percentages in algebra were correlated with lower scores. This was after controlling for students’ mean achievement in 7th-grade math the previous year, which establishes that the correlation is not simply the result of diluting the test-taking pool with more students.

This suggests that the more students a school enrolls in algebra, the more school officials feel the need to use curriculum materials with less challenging content. Flooding academic courses with underprepared students may have had the net effect of driving the rigor out of these courses.

The best course of action is for high schools to reinstate truly rigorous academic courses, but to differentiate among students with respect to the extent and rate of progress through the sequence of courses. For example, multiple levels of diplomas could be offered based on courses completed, although this progress should still be verified by external exams, as in the International Baccalaureate program. This would be a major improvement over the other form of differentiated curriculum (rigorous content for the college-bound, nonacademic content for the rest) that A Nation at Risk warned against, while also respecting the fact that not all students can handle the same lockstep schedule of rigorous courses.

Williamson M. Evers is a research fellow at the Hoover Institution. Paul Clopton is a biomedical research statistician with the U.S. Department of Veterans Affairs.