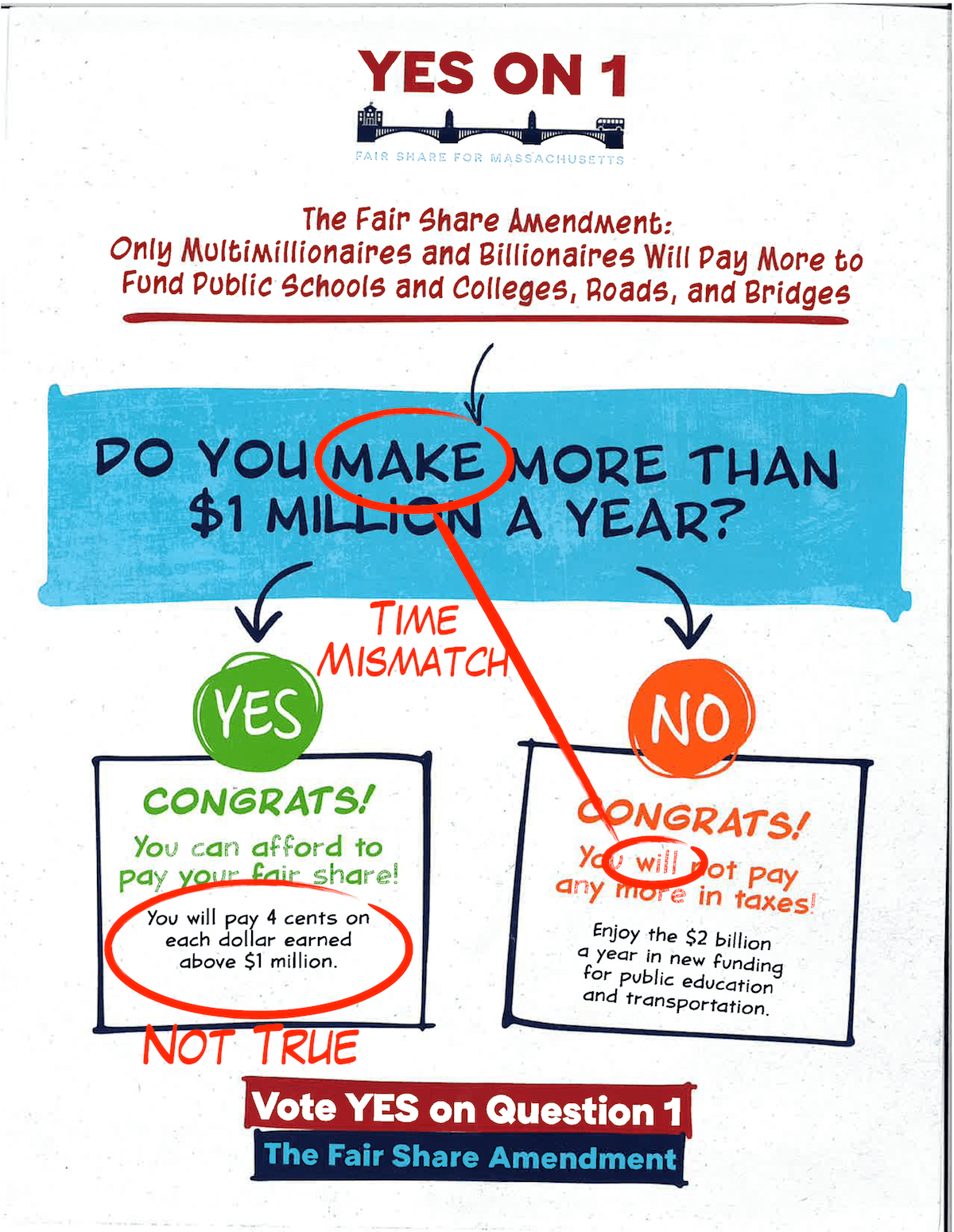 The teachers unions are paying to mislead voters about a Massachusetts ballot question that would raise taxes to pay for education and transportation.

One mailing claims, “The Fair Share Amendment only taxes 4 cents on every dollar earned OVER $1 million a year. For the 1% who make that much money, the first million is free.” It’s not accurate that the first million is “free.” The first million dollars in income is already subject to state and federal taxes. Someone who earns $1 million in 2023 would be subject to 37 percent federal income tax on all income above $578,125 for a single filer, along with an additional 3.8 percent ObamaCare tax on investment income and a 5 percent state income tax. These million dollar earners, in other words, are already facing a marginal tax rate of more than 40 percent. 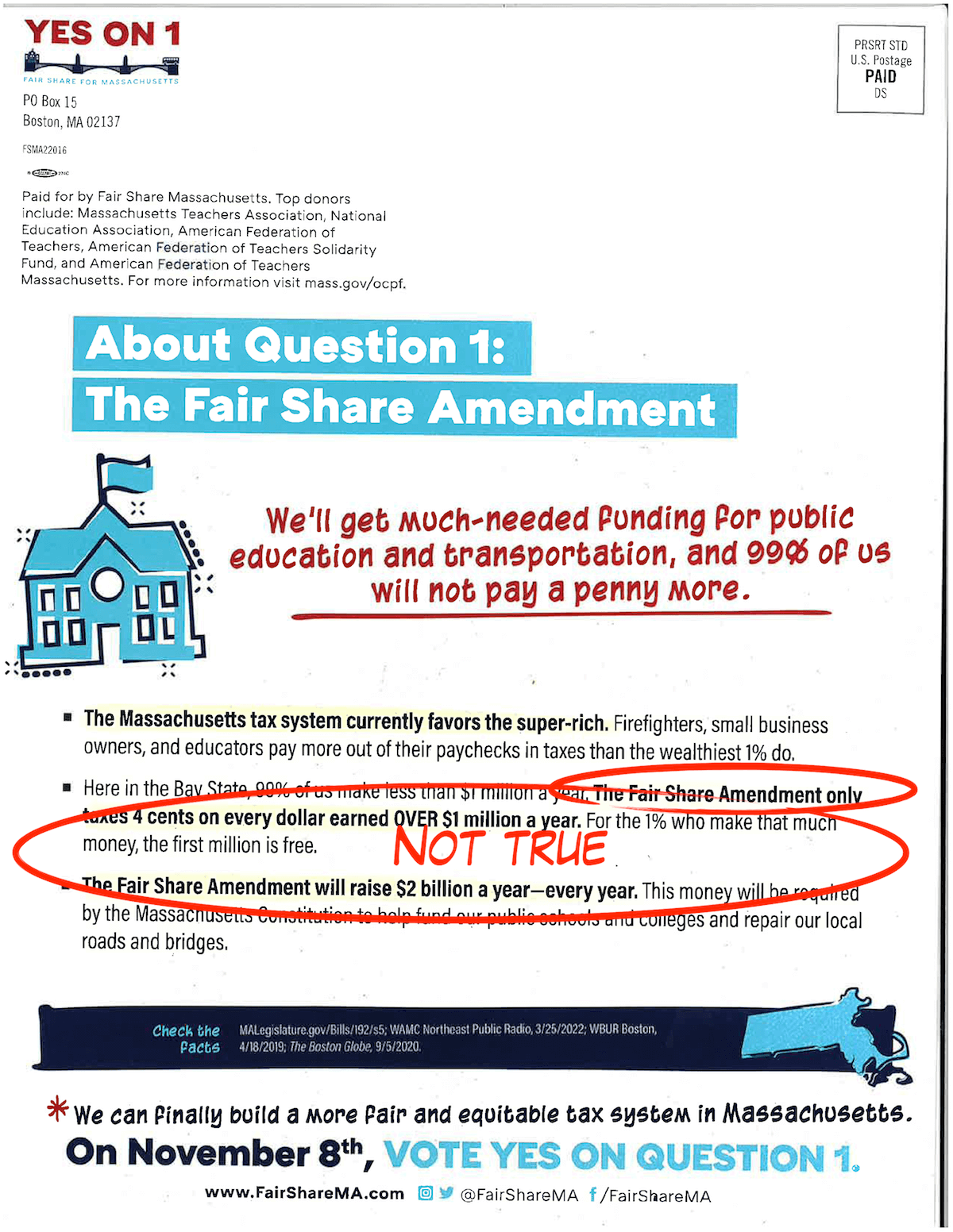 The same mailing claims “The Fair Share Amendment will raise $2 billion a year—every year.” That’s based on the assumption—proven false in other states—that no earners will move or change their behavior to avoid the tax. A study by the Center for State Policy Analysis at Tufts found, “Building on the latest economic research, and examining how similar taxes have affected other states ….Factoring in expected behavioral changes by high earners, the Massachusetts millionaires tax would raise about $1.3 billion in 2023.”

The mailing includes an infographic asking recipients, “Do you make more than $1 million a year?” Under “yes,” the mailing advises voters, “you will pay 4 cents on each dollar earned above $1 million.” That misleadingly understates the tax obligation. The federal taxes also apply. And at the state level, the new 4 percent tax the teachers are pushing would come on top of the 5 percent that is already in place, bringing the total to 9 percent. The two rates would add up, so the million dollar earners would owe the state nine cents on each dollar, not “4 cents.” Together with the federal taxes, a nine percent state rate means the government would take nearly half of each additional dollar earned. 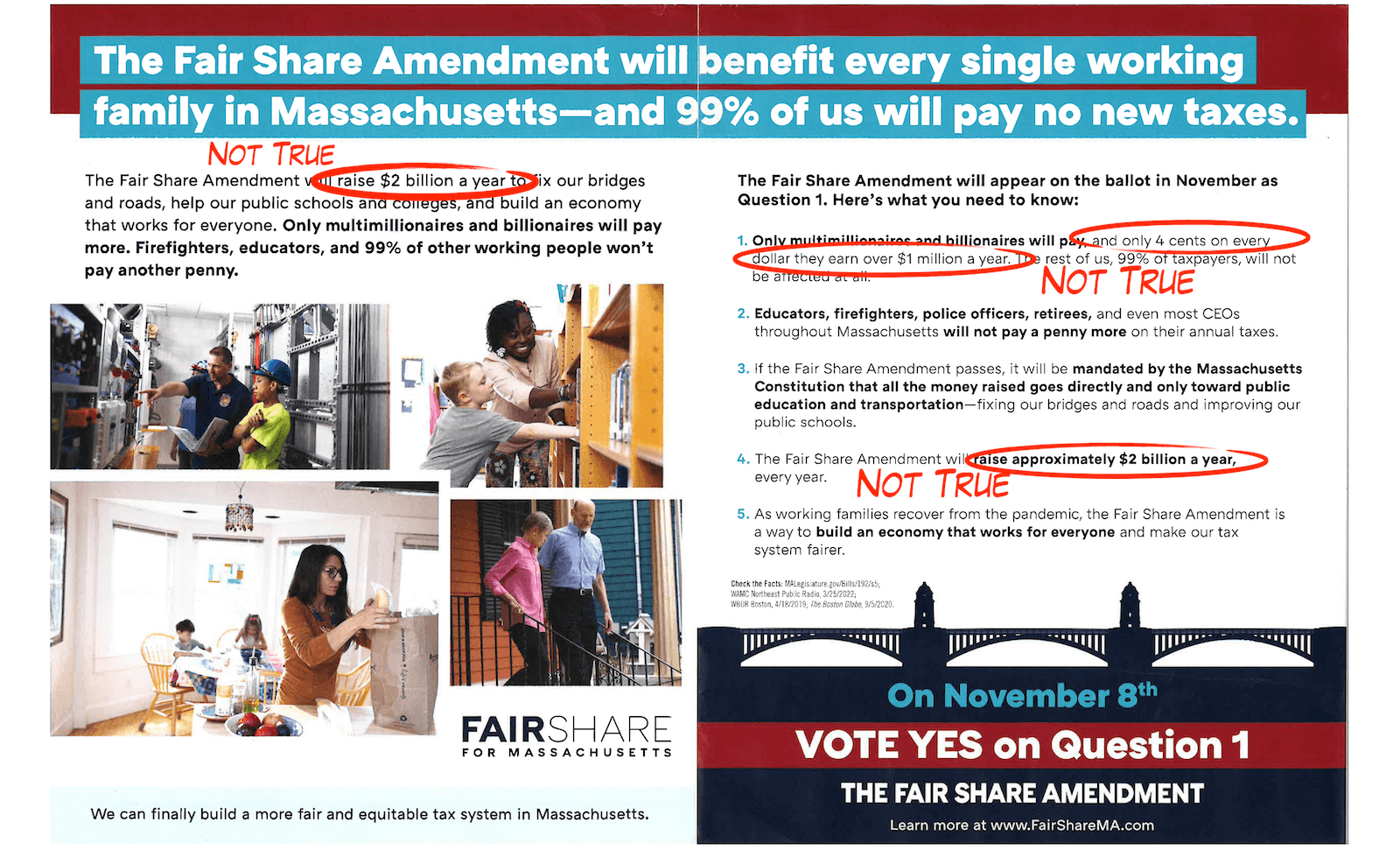 A second mailing also misleadingly repeats the “$2 billion a year” and “only four cents on every dollar they earn over $1 million a year” claims. That mailing includes photographs of three individuals that the teachers union-funded campaign say “Will Pay More Taxes” if the initiative passes. The first is Abigail Johnson, the CEO of Fidelity Investments. But the Johnson family reportedly moved its family office in 2010 to Salem, New Hampshire, from Boston. New Hampshire has no state income tax. When Johnson’s father died, it was reportedly “at his home in Florida,” another state with no state income tax.

It’s possible that Johnson and Davis “will pay more taxes” if this initiative passes. But it’s not a sure thing; it’s also possible that they will reorganize their affairs to avoid it. The super-wealthy have excellent access to lawyers and accountants who specialize in minimizing taxes; someone less famous whose house or small business sells in one year for more than $1 million may be less well advised. 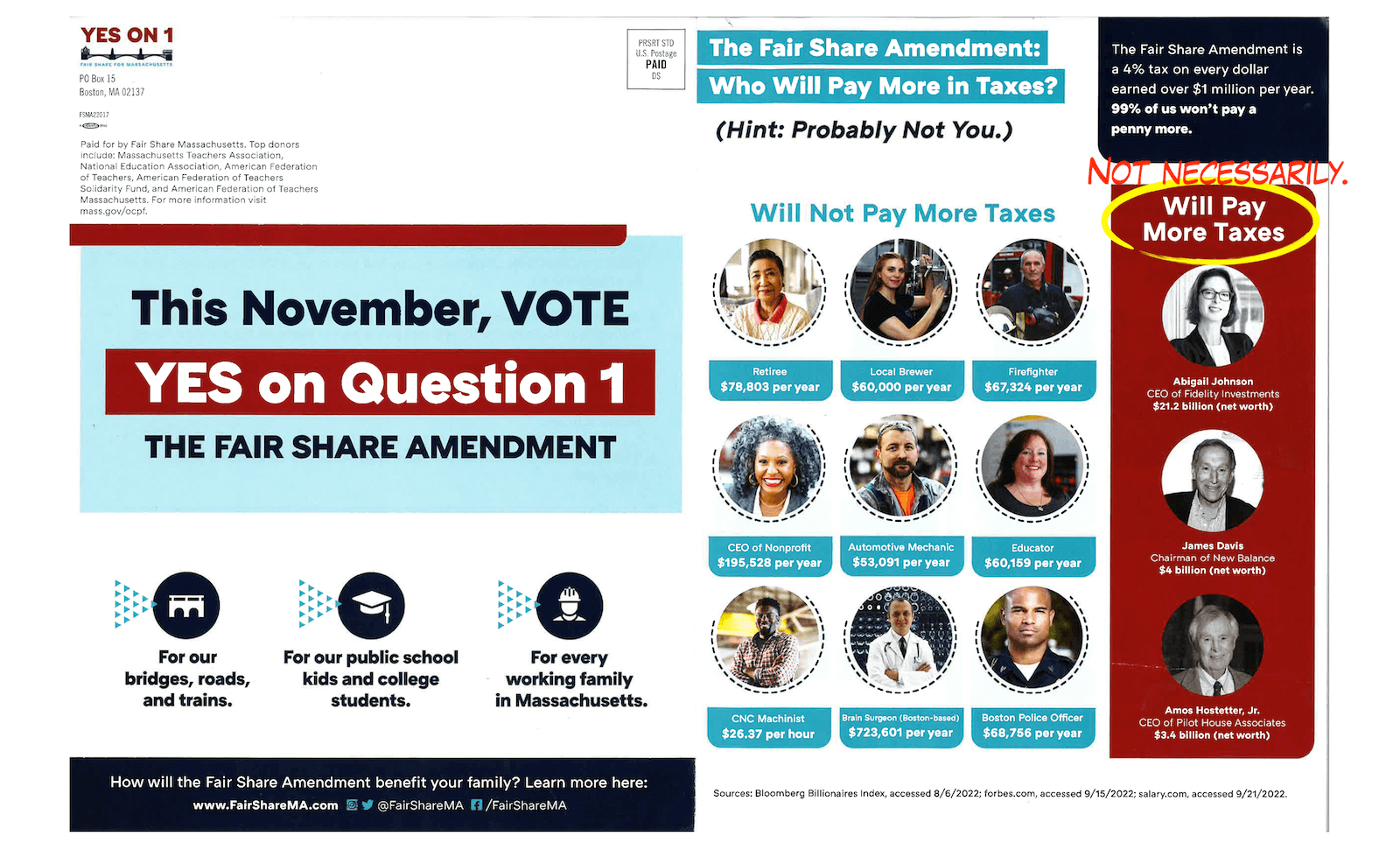 Similarly, the mailing asks people how much money they “make,” while then predicting what they “will not pay” in taxes. That is a mismatch between current income and future tax obligations. It’s telling voters that the screenplay or novel they’ve been working on at nights or on the weekend will never be a hit; that the business idea they’ve been nursing or made a small investment in will never succeed; that their neighborhood will never improve to the point where they can sell their house for much more than they originally paid. It denies the possibility of upward income mobility. This isn’t as clear-cut a falsehood as some of the others, but it’s nonetheless a kind of grim denial of what many consider to be, and at least some have personally experienced as, the American Dream of upward mobility.

The mailings say the money will provide “funding for public education and transportation,” but even that could turn out to be less than fully accurate. Money is fungible, and whether this tax money winds up being additive will be at the discretion of state lawmakers, who could wind up deciding to increase spending in other areas instead.

People of goodwill may differ on whether raising rates on a small minority of high earners is good public policy, or whether the money raised will make an appreciable impact on education or transportation outcomes. But at the very least, the voters of Massachusetts should be able to make their choices on Question One based on accurate information—not on false information spread by teachers.

One of the arguments for increased spending on public education is that a well-educated citizenry is essential to the functioning of democracy. It’d sure be ironic if, rather than helping voters with the skills needed to participate, the teachers in this election are fooling them by spreading falsehoods. Perhaps the teachers are afraid that if voters had the real facts, they’d vote down the tax increase.