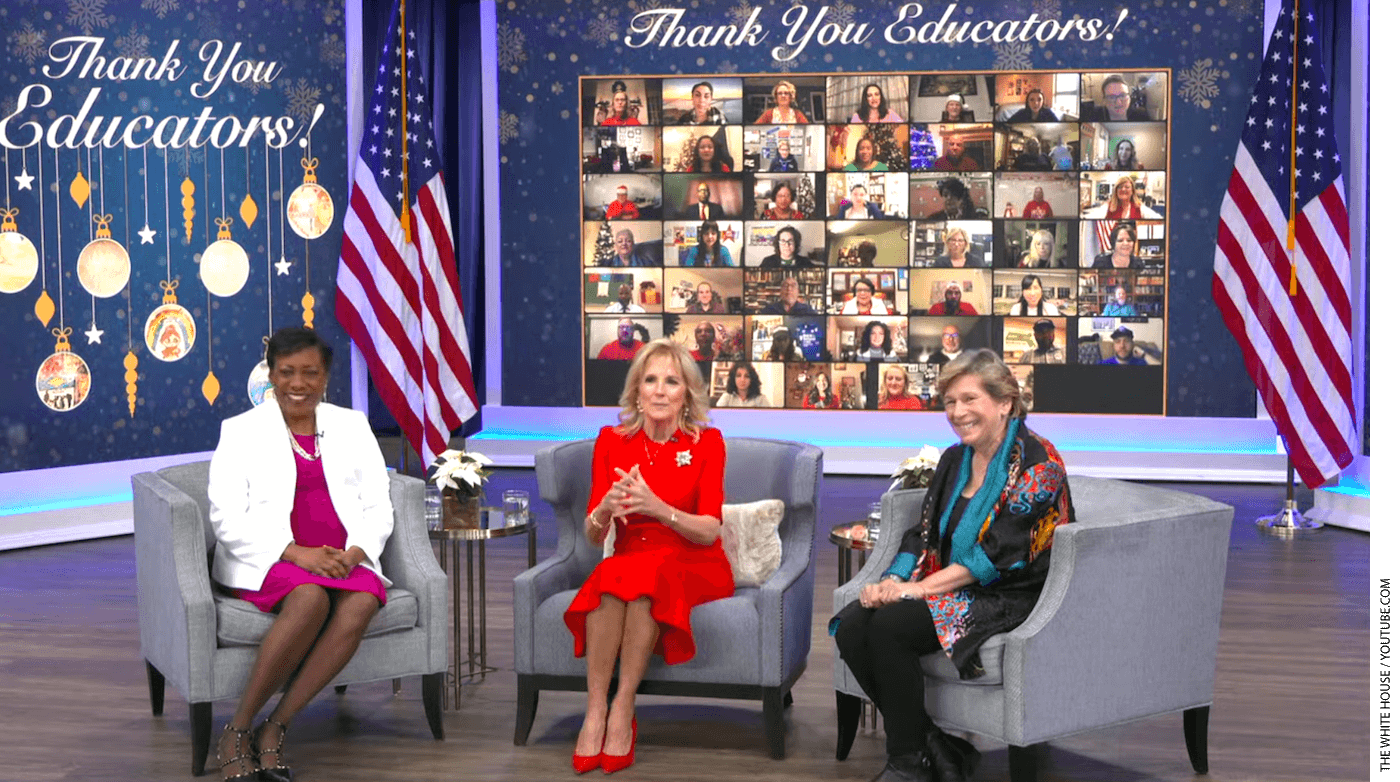 A Republican possible presidential contender may think that American Federation of Teachers president Randi Weingarten is “the most dangerous person in the world,” but the current occupant of the Oval Office is a big admirer of Weingarten and of the president of the National Education Association, Becky Pringle.

That was the message conveyed by the First Lady, Jill Biden, at a White House event Monday night with Weingarten and Pringle.

“They’ve been incredible partners, tireless advocates for educators and their students, and of course, good friends,” Jill Biden said at what was billed as a “Virtual Educator Appreciation Event.”

“I wanted to personally let all of you know how grateful the President and I are,” Biden said.

While the audience was virtual, Pringle and Weingarten were live and in person alongside Biden, flanked by background screens with the message “Thank you educators!” At one point, Biden reached out and grasped Weingarten’s hand.

Weingarten noted that she and Pringle had been invited to the White House by Jill Biden on the first full day of Biden’s presidency. At that point, she said, 40 percent of the schools were closed, and “the economy was doing terrible.”

Weingarten credited Biden for a series of legislative victories that she said “shows that government can work” and had helped to turn things around.

“I am a history teacher. It is more than any other president since FDR, and maybe more than FDR,” Weingarten said, in an exaggeration that slighted Presidents Obama, Johnson, and Reagan.

Pringle noted that Biden is still working as a community college teacher. “We’re standing backstage and Dr. Biden is sharing that she has to grade papers and not only that, she has to record her grades,” Pringle said.

“Thank you for standing up for your students and for each other,” Biden said. “I want you to know that you aren’t in this alone. You have a champion in the White House—two in fact: your President and me.”

Biden mentioned what she called “the three R’s of teaching: recruiting, respecting, and retaining our educators.”

“We’re going to keep standing with you,” Biden said. “Together, we will continue to transform our country.”

The NEA spent about $30 million in the 2020-2022 election cycle while the AFT spent about $18 million. The funds overwhelmingly went to support Democrats or oppose Republicans, Federal Election Commission records and Opensecrets.org show.