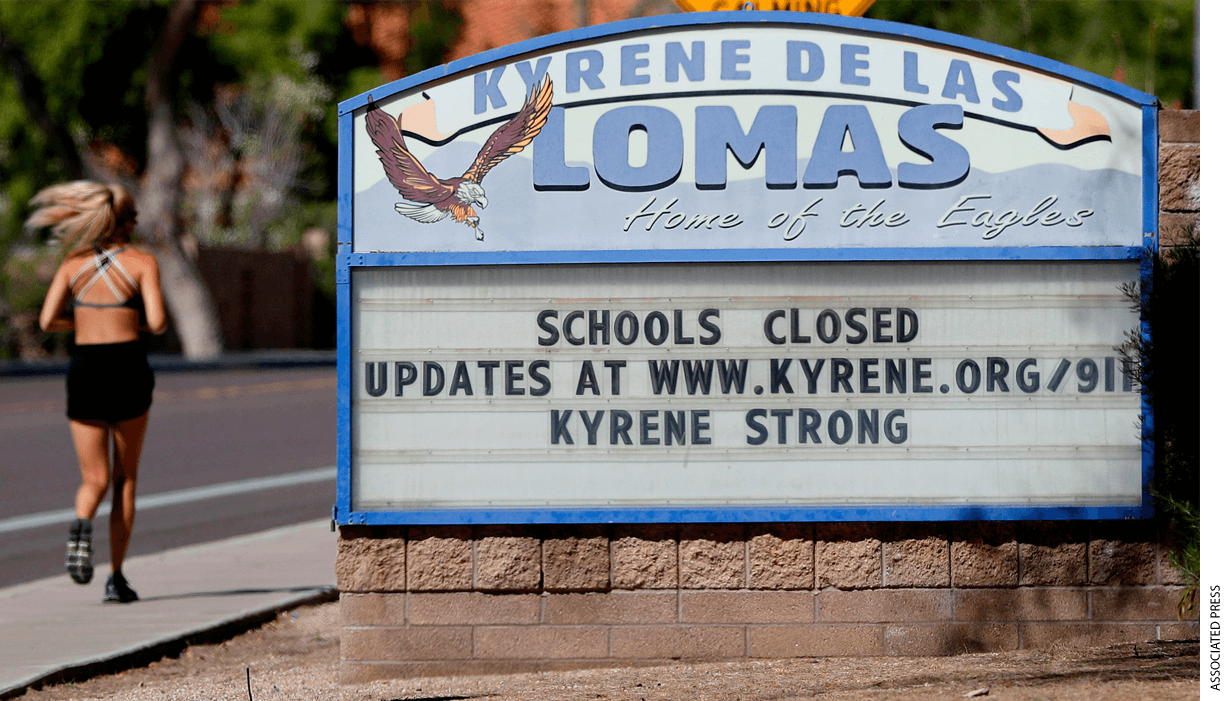 The 2020 Education Next survey reveals a paradox related to what American parents think about the quality of the instruction their children received after schools closed their doors in response to the Covid-19 pandemic. The parents of a substantial majority of school-aged children—71%—think their kids learned less than they would have in school. At the same time, parents of 72% of children say they are satisfied with the instruction and activities provided by schools during the closure (see Figure 1).

What experiences account for these seemingly contradictory opinions? And how did those experiences vary across social groups and the nation’s district, charter, and private school sectors? Since schools closed, commentators have used a variety of methods to understand the likely implications of this episode for student learning and what it bodes for the future, from analyzing school districts’ remote-learning plans to tracking reports of homeschooling on social media. Yet we lack a thorough and systematic picture of what American families experienced during the pandemic. 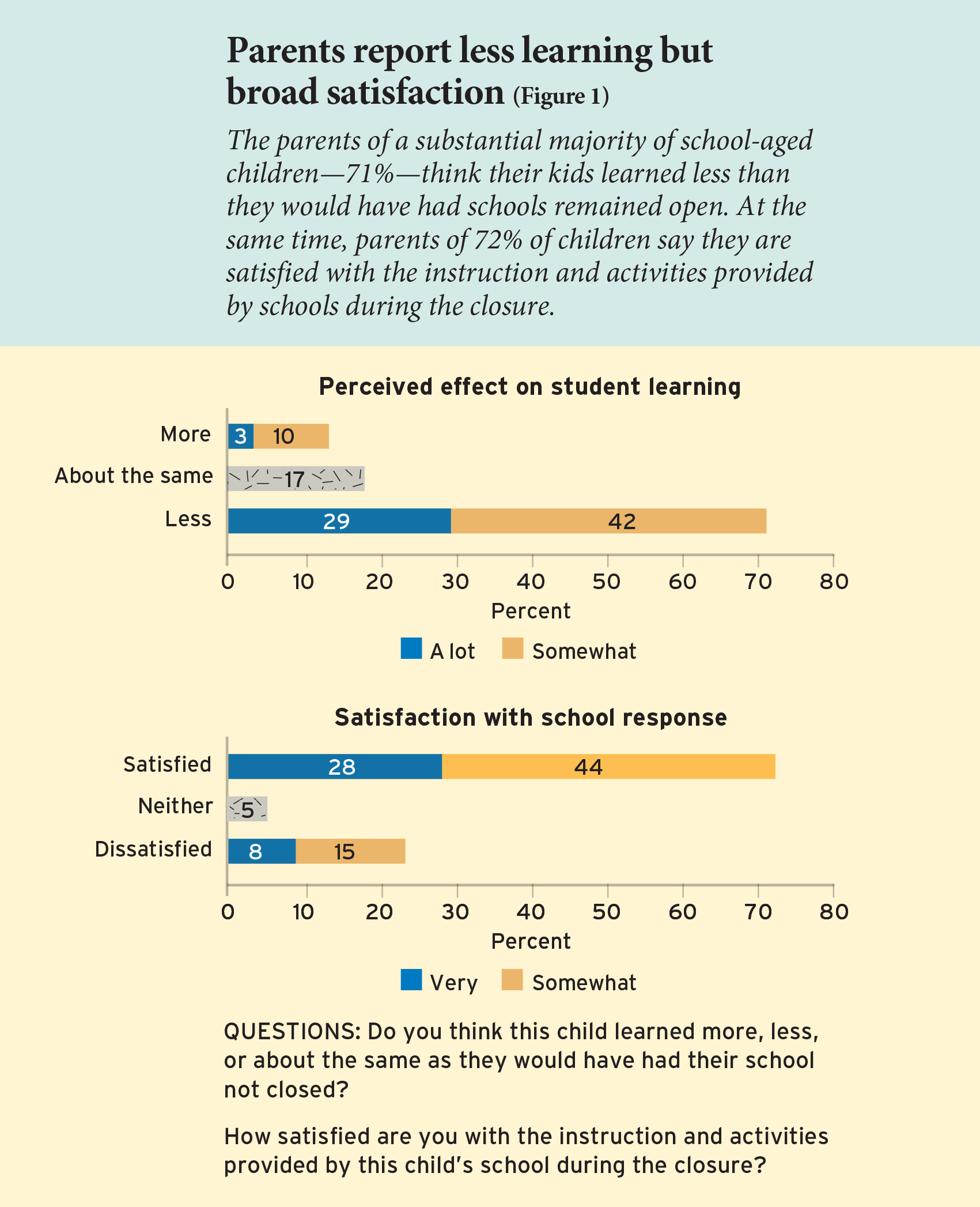 New data from our 14th annual public-opinion survey help to close this gap. We administered the survey to a nationally representative sample of 1,249 parents with children in kindergarten through 12th grade whose schools closed during the pandemic, including oversamples of parents who identify as Hispanic and parents who identify as Black (see sidebar for details on the survey methodology). These parents answered questions about each of their children whose school closed, including 2,147 children in total. We also gathered data from a nationally representative sample of 490 K–12 teachers whose schools closed because of the pandemic, enabling us to compare what parents reported receiving to what teachers said they delivered.

Despite early fears that schools would focus remote instruction on reviewing what students had already learned, parents’ responses suggest that the schools attended by 74% of students continued to introduce new content during the closure (see Figure 2). Most of the rest—schools attended by 24% of the children—are said to have provided instruction or activities that reviewed what students had learned prior to the closure. Parents of just 2% of students say that their child received no instruction or activities. 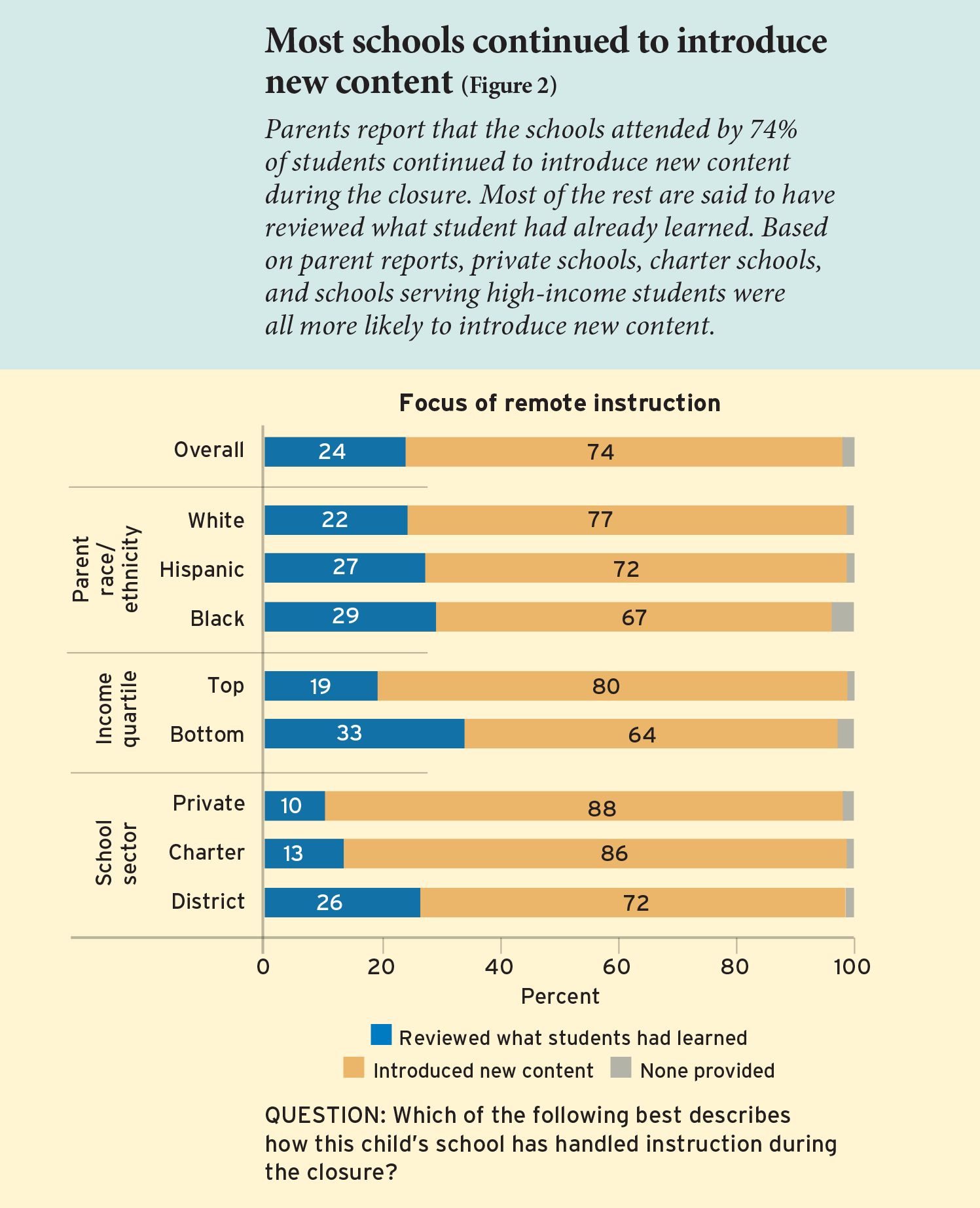 By large measure, most remote instruction was delivered online. The parents of 87% of children say that their child participated “primarily on a computer, tablet, or similar device.” This was the case for 73% of lower elementary students and for nearly all high school students (96%).

Responses vary more widely in regard to how often children heard from their teachers and schools (see Figure 3). While some parents say their child interacted regularly with their teachers during the closure, others say they went for long stretches with little or no contact. For example, the parents of nearly half of students (46%) say their child met with a teacher multiple times during a typical week for whole-class instruction delivered by videoconference or some other way. Another 24% are said to have done so just once a week, while about one in five students (19%) are said to have had no live whole-class instruction. 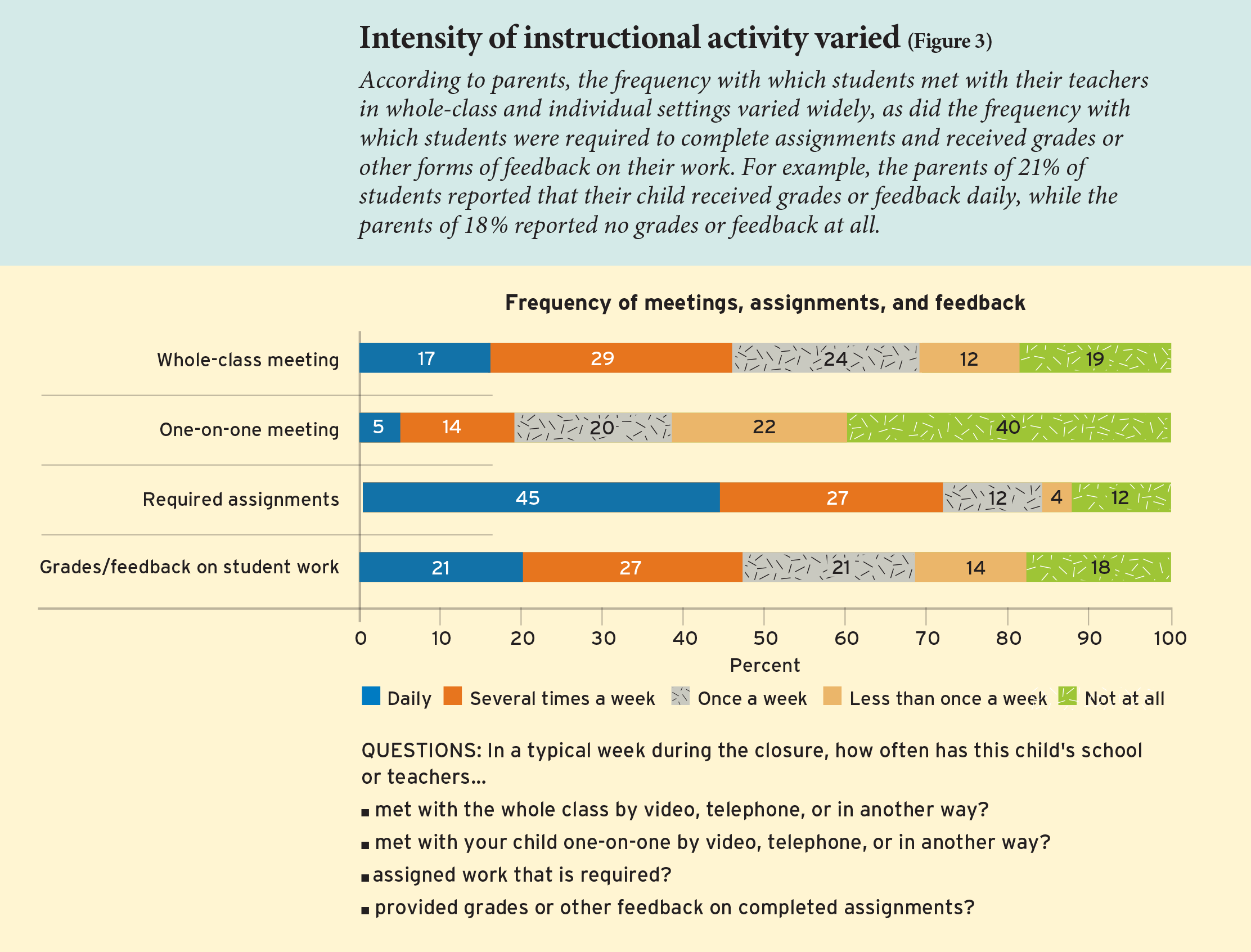 Required assignments were less common among students in kindergarten through 2nd grade. Twenty-one percent of these students had no required work, according to parent reports, as compared to 8% in middle and high school. The opposite pattern holds for voluntary assignments, which were most common in lower elementary grades and least common in high school.

According to their parents, American students on average spent 3.4 hours on schoolwork during a typical day during closures—a figure that varied across grade levels. Lower elementary students are said to have spent 2.9 hours, on average, while for high school students the number was 3.8 hours.

As noted above, the parents of 72% of students say that they are satisfied with the instruction and activities provided by their child’s school during the closure; 28% report that they are “very satisfied.” Despite this generally high level of satisfaction, there is evidence that they would have welcomed more instruction, assignments, and feedback. Across every measure we used—including the number of assignments students received, the time they spent on their schoolwork, and the frequency with which they interacted with teachers—parental satisfaction rose with greater intensity of instruction (see Figure 4). To provide just one example, the parents of 35 percent of children who reportedly received grades or other feedback multiple times of week say they are “very satisfied” with their school’s response. This number falls to 21 percent for the parents of children who reportedly received this kind of feedback once a week or less. 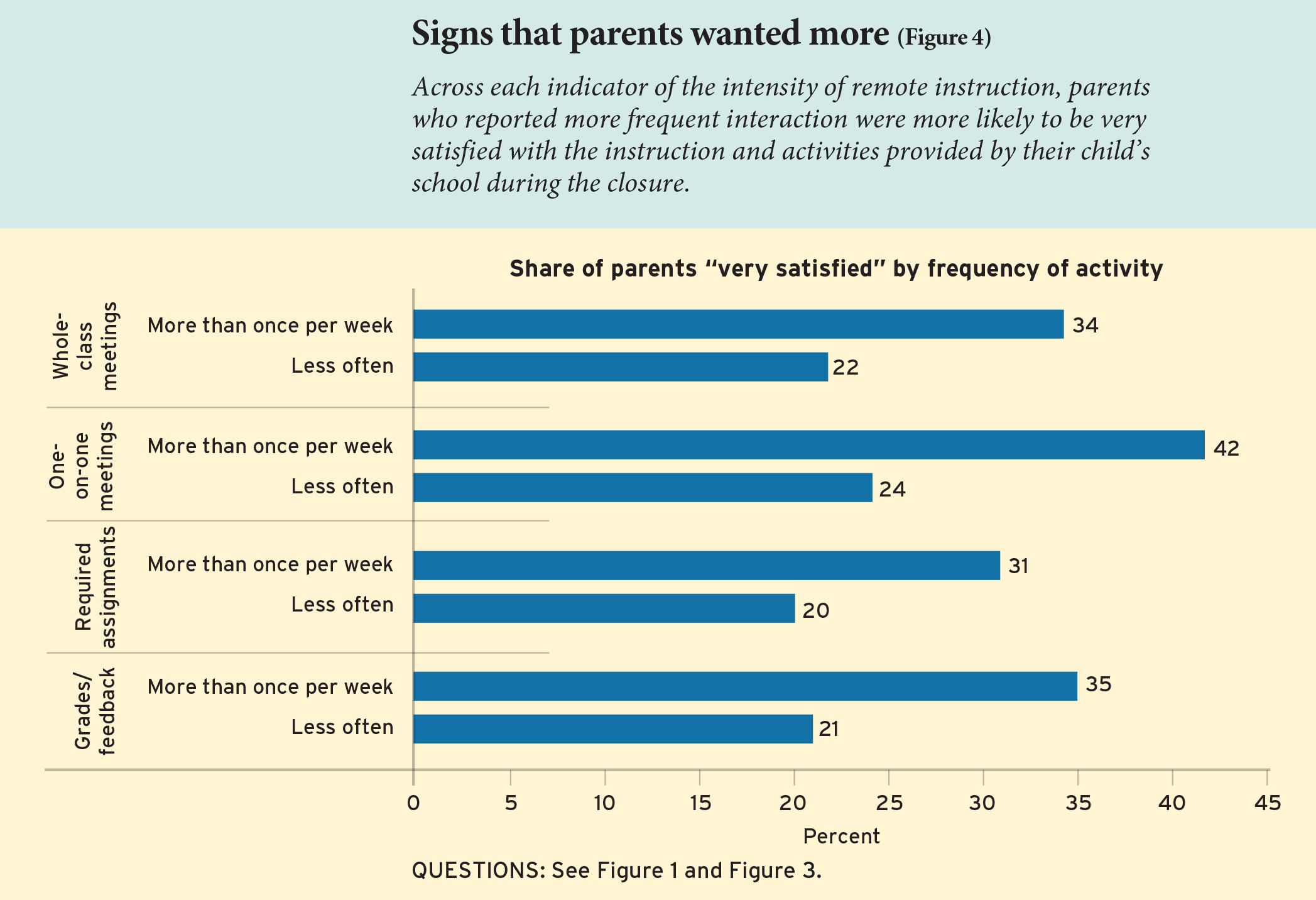 We also surveyed a sample of 490 K–12 teachers who work in schools that closed during the pandemic. Our questions for teachers parallel those we asked parents. Generally, teachers’ responses are consistent with how parents describe their children’s experiences, but a few exceptions arise.

Parents and teachers hold similar opinions on how much students learned after their sudden immersion into the world of distance education. In fact, teachers are even more likely than parents to say children learned less than they would have if schools had remained open. Eighty-seven percent of teachers say their students learned less, including 48% who answered “a lot less.” By comparison, parents of 71% of the students say their children learned less, with 29% saying “a lot less.”

Many commentators have highlighted the potential for widespread school closures to exacerbate pre-existing racial, ethnic, and economic inequalities. In the absence of in-person schooling, the argument goes, advantaged students will be partially buffered from ill effects because their families generally have more time, flexibility, and resources to offset the reduction in formal instruction. By contrast, students of color and students from low-income families, who were already at a disadvantage before the crisis began, will disproportionately face the negative consequences of the shutdown.

The results from our survey partially corroborate this theory, but they also complicate it. Children of Black, Hispanic, and low-income parents were less likely than children of White and high-income parents to receive instruction from their schools that introduced new content (as opposed to reviewing material already covered), according to their parents. This disparity could lead disadvantaged students to fall further behind. On the other hand, parents of Black, Hispanic, and low-income students report that their children had more frequent interactions with their teachers and spent more hours a day on schoolwork than their White and more affluent counterparts. These same parents say they spent more time helping their children with schoolwork and were less likely to say their child learned less because of the closure. This pattern should not assuage concerns about inequality in the wake of the pandemic. It does, however, shine a spotlight on the hard work that many parents report doing to preempt this problem. 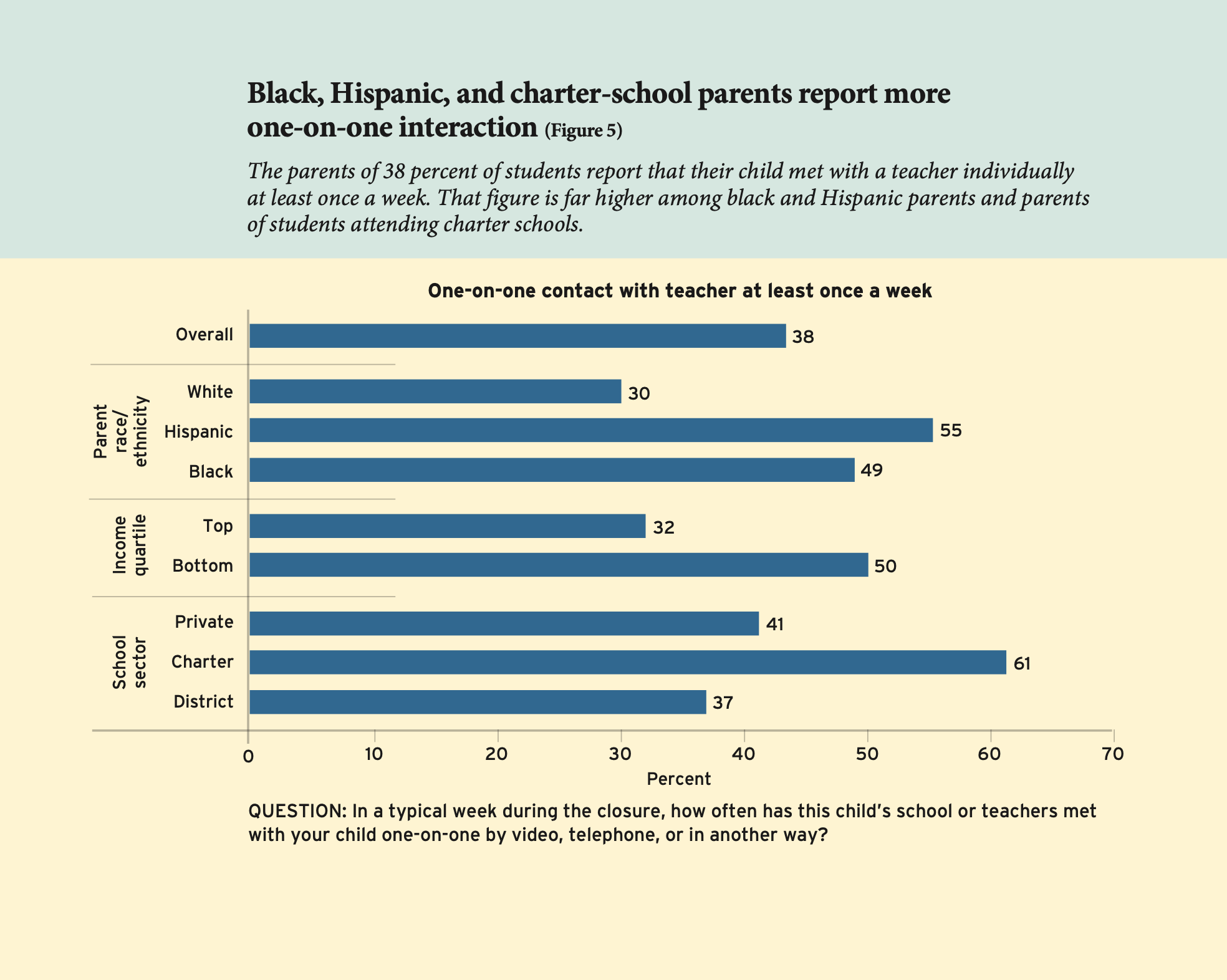 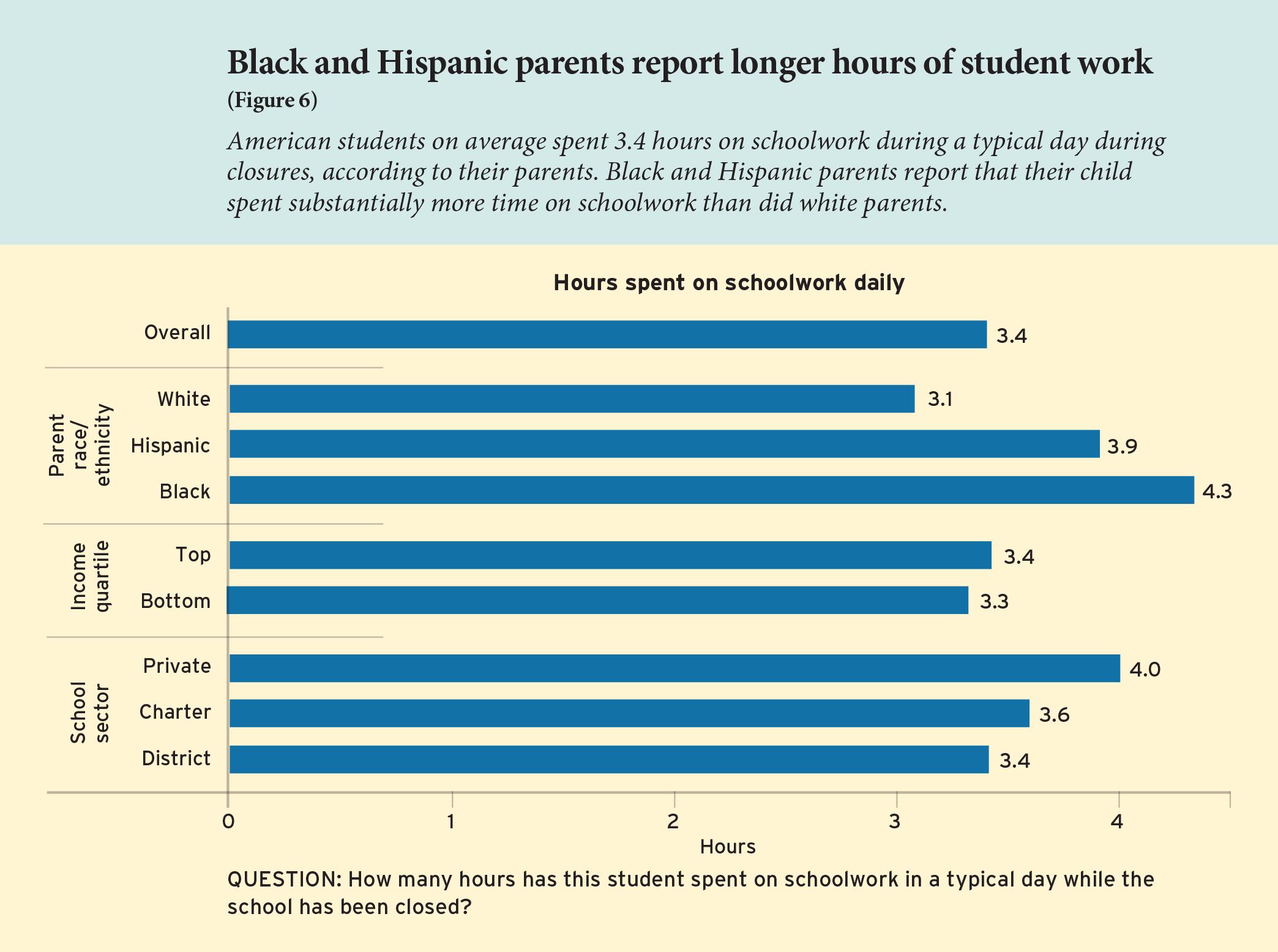 According to their parents, larger shares of the children of White respondents (76%) and children in higher income households (73%) learned less than they would have if schools remained open than was the case for the children of Black respondents (54%), the children of Hispanic respondents (61%), and children in lower income households (57%; see Figure 7). It is not clear whether this is a result of lower expectations of schools in normal times or the result of compensatory efforts among low-income families, families of color, and the schools that serve them. At the same time, we do not observe notable differences in the share of students whose parents are satisfied with their schools’ responses by parents’ race/ethnicity or household income. 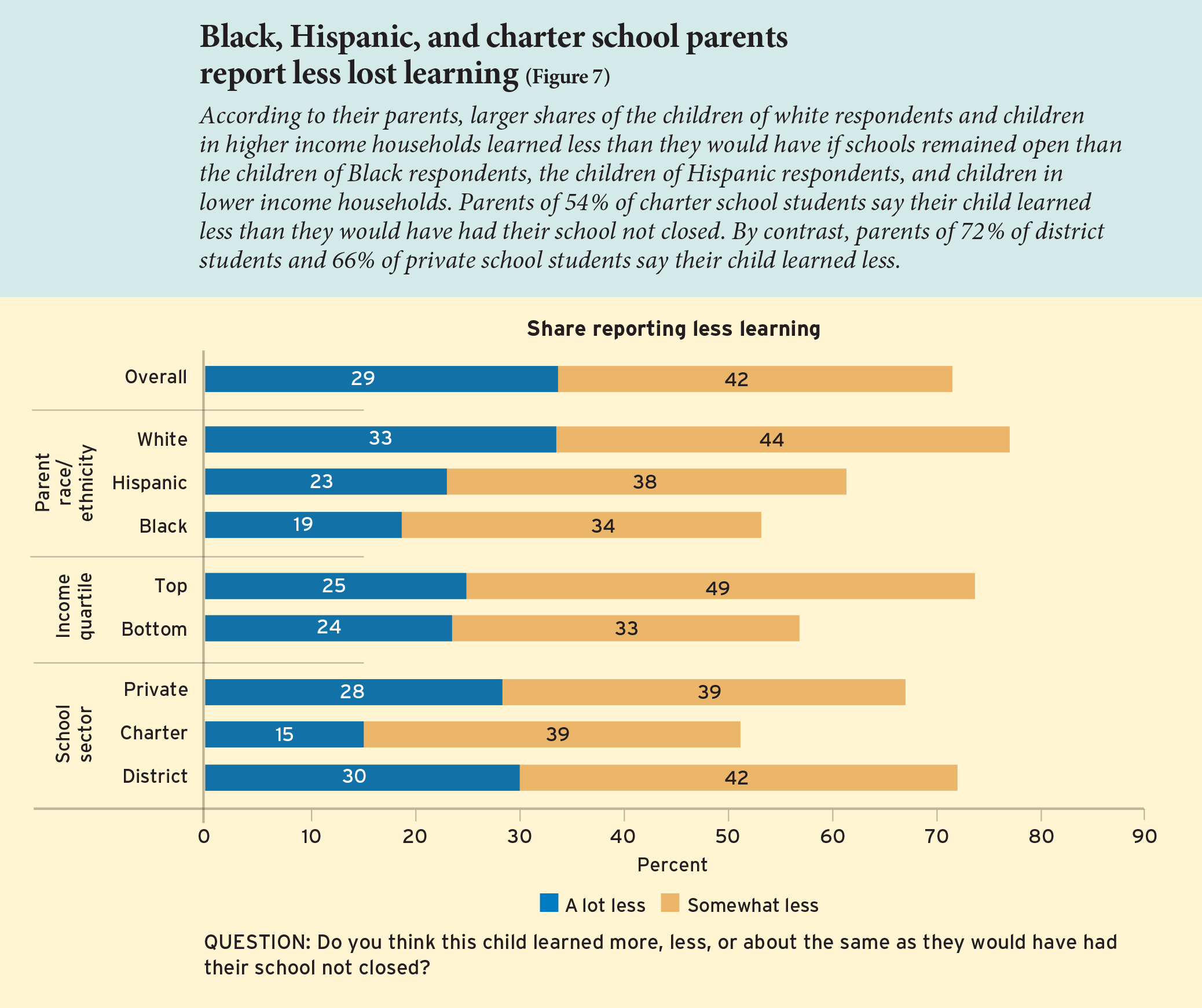 School Responses to Closures by Sector

The nation’s three K–12 educational sectors—district, charter, and private—seem to have responded differently to the challenges posed by the pandemic. Although serious disruptions occurred in all three sectors, there are several indications that charter schools and private schools were better able to adapt to the new learning environment than was the district sector.

Based on their parents’ reports, children in private or charter schools were more likely to receive instruction that introduced new content, as opposed to reviewing what they had already learned. The parents of 88% of private-school students and 86% of charter-school students give that response, as compared to the parents of 72% of district students.

Children in private or charter schools were also more likely to meet with their school or teachers along with their entire class by video, telephone, or in another way. Parents of nearly 70% of private-school students and 62% of charter school students say such meetings took place daily or several times a week, but parents of only 43% of district students give this response. Twenty percent of district students never met with their school or teachers as a class, as compared to 11% of students in the private and charter sectors.

Parents of 60% of charter school students say teachers graded assignments or gave other feedback daily or several times a week, but the parents of only 46% of district students report this degree of frequency. (The share among private school students is 56%, which does not differ significantly from either group.) 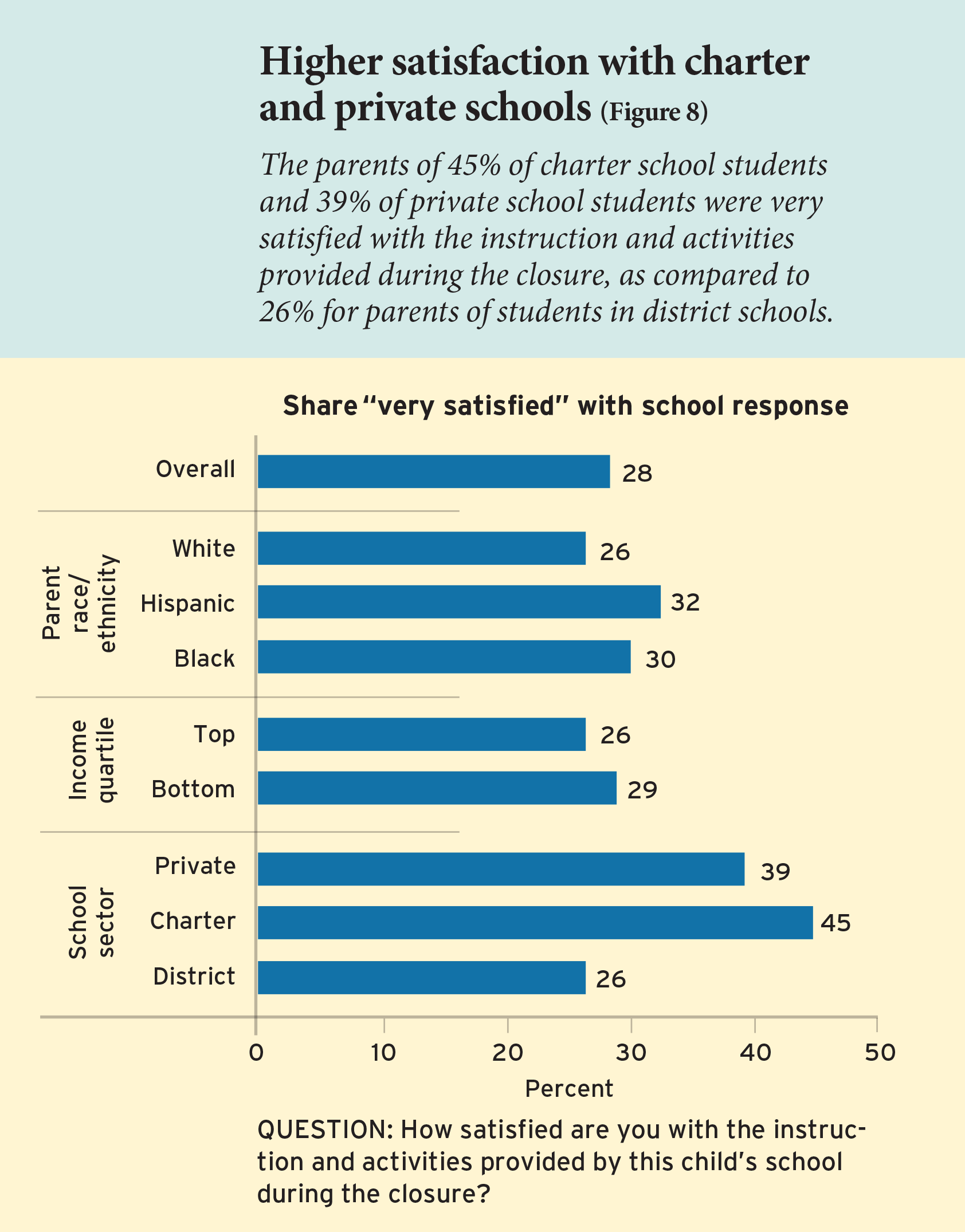 Taken as a whole, our findings highlight the risks to students’ educational well-being if schools do not reopen this fall. Overwhelming majorities of both teachers and parents report that students learned less when schooling went remote, with the parents of more than a quarter of students and just about half of the teachers reporting that students learned “a lot less.” Many other findings from our survey suggest that students did not receive the same face-to-face interactions (even on a screen) with their teachers that ordinarily take place inside the school building. Admittedly, a majority of parents say they are satisfied with the school’s response, but these expressions likely convey generosity toward educators who faced sudden and enormous challenges as the pandemic spread. If schools do remain closed, school districts would do well to look to the private and charter sectors for ways to strengthen school-student connections in remote settings. But even at charter schools, the parents of 54% of students said their child learned less via remote schooling than they would have otherwise. For most students, the best way to learn is very likely through in-person instruction and guidance from a teacher.

This article appeared in the Winter 2021 issue of Education Next. Suggested citation format: