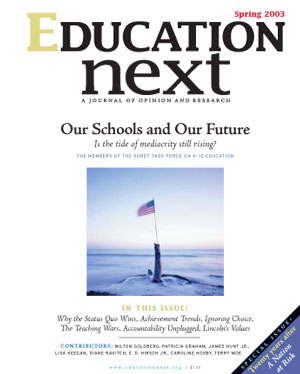 Terry Moe (“Reform Blockers,” Feature, Spring 2003) writes with his usual analytic elegance and passionate commitment to reform. The only problem is that many of his arguments conflict with the facts. I am no fan of teacher unions, for the same reason that Moe articulates—they too often support the status quo. But Moe’s tendency to regard them as all-powerful does not accord with education politics in the past decade.

Exhibit A is the No Child Left Behind Act (NCLB). In this case, most congressional Democrats supported a bill that was largely crafted by a Republican presidential administration. So which is it? Were the Democrats engaged in a collective electoral suicide pact? Did they not fear the unions’ ability to punish them in the next election? Or did their traditional union allies actually support the law’s accountability provisions? None of these scenarios supports Moe’s storyline.

An alternative explanation is that NCLB was all a big sham—the Democrats (and Republicans) pretended that they were seeking real reform; the unions pretended to oppose this pretense of reform; and governors and school administrators will pretend to implement this pretense of reform. This would accord with Moe’s view of education politics. Yet it seems convoluted beyond plausibility. NCLB contains real provisions that will complicate the lives of public school teachers and administrators for years to come. If teacher unions are truly antireform, they lost on this law.

Of course, teacher unions act to protect their members; so do associations of lawyers, doctors, college professors, hairdressers, and undertakers. However, there is nothing inconsistent in wanting both to enhance one’s job and to help the people with whom one works. Does Moe believe that police officers are indifferent to the murder rate in their city? Will firemen stand by while buildings burn down? Will tenured professors at community colleges or state universities shortchange their students as much as they can get away with? Surely there are some time-servers within all these groups, just as there are in teaching. Yet for the most part they are conscientious, hard-working professionals. We ought to assume that the vast majority of teachers also care deeply about their charges.

Moe is correct that core constituents of the Democratic party—”poor and minority families” in cities—endorse choice more enthusiastically than do Democratic elites. (It is worth noting that poor and minority families also endorse lots of other reforms, such as access to decent health care, to which Democratic and Republican elites fail to respond. School choice is not usually anywhere near the top of their list.) However, Moe does not point out that core constituents of the Republican party—middle-class and white families in suburbs—also disagree with their party elites on choice. Just about the last thing they want is choice programs that would open their schools to the children in failing urban schools. Both parties face a radical disconnect between the preferences of their elites and those of their voters, which may explain why fewer than 0.1 percent of the nation’s school-age children are in publicly funded voucher programs. Let’s begin with Paul Peterson’s premise (“Ticket to Nowhere,” Feature, Spring 2003) that the schools haven’t matched America’s economic and social progress in the past generation. The A Nation at Risk report warned in the starkest terms that if U.S. schools didn’t shape up, the Germans and Japanese would beat our economic brains out, just as all the post-Sputnik Cassandras of the late 1950s and early 1960s warned that the Russians would win the cold war if the schools did not improve. Those children of the 1950s and 1960s are the ones who produced all the progress that Peterson now celebrates. Meanwhile, we’ve left the Germans, the Japanese, and the Russians in the dust.

The premise of progress is also partially wrong, in a way that illustrates the problems of the schools. For instance, America’s improvements in health care have been horribly distributed, with a large percentage of Americans having no health coverage at all—just as the poorest Americans are generally forced to send their children to the worst schools. Most of the nations with which the United States is compared on international tests have far broader social-service networks, especially for children. It’s wonderful to see conservatives using welfare states like Sweden, Denmark, Iceland, and France as benchmarks. In the United States, it’s the teachers and schools that, for the most part, are the front line in dealing with the huge gaps in the social-service system.

Yes, America’s schools are often outscored by other nations on international exams, but to what extent do those comparisons measure schools and to what extent are they reflections of cultural attitudes over which schools have little control? This country offers perpetual second chances and open access to some form of postsecondary education for virtually every student. Societies where high-stakes decisions are made by the age of 13, or even 18, concentrate students’ and parents’ minds wonderfully at a time when Americans, with their anti-intellectual traditions, are often thinking a lot more about Friday night football, cheerleader camps, drugs, and safe sex. It was not the schools that Ross Perot had to fight in the 1980s when he pushed his proposal that no student with less than a “C” average could play football; it was the local Texas football boosters.

Yes, American parents are better educated and wealthier than ever before. But the demographics don’t tell us much about the conditions of parents’ lives, and even less about those of their kids. What we do know is that after hitting a low of 14.9 percent in 1970, the percentage of children living in poverty hovered at somewhere between 19 and 22 percent through the 1980s and early 1990s. It dipped to 15.4 percent at the end of the Clinton years—still higher than 30 years before and considerably higher than in all those European countries. By now, it’s almost certainly up again. Likewise, the percentage of kids who are not native English speakers is far higher now than it has been in nearly a century.

American schools, and particularly schools serving our poorest kids, should be far better, freer of stupid bureaucracies and self-serving teacher unions, staffed by better people, and supported by systems that encourage quality instead of fighting it. But 40 years of observing and writing about schools have also taught me how complex this story is, how interlocked schools are with their communities. We should be doing better, but it’s not surprising that every generation, going back at least a century, has complained that the schools are failing and aren’t as good as they used to be. Our schools were never as good as they used to be. In the area of teaching (Chester E. Finn Jr., “High Hurdles,” Feature, Spring 2003), A Nation at Risk had it right. Potential teachers should demonstrate competence in an academic discipline and an aptitude for teaching; schools must offer incentives to attract outstanding candidates; unconventional paths to the profession must be forged; and salaries must be based on performance and sensitive to market conditions. Is there any hope that the next 20 years will see these reforms embedded in public education?

I am optimistic. Not because I think the establishment will willingly accept deregulation. Not because I believe multiple approaches will be tried under proper experimental conditions, providing research-based evidence for policymakers. I have no hope for a truce in the “teacher wars.” Research will make a powerful contribution, but partisans will argue endlessly over methodology, and since when has a deep political divide been bridged by research? Chester Finn’s plea for multiple approaches will, I fear, fall on deaf ears.

Nonetheless, I believe that performance will trump the “professionalism” movement. The market will demand it. Effective teachers in science, mathematics, special education, and other areas will continue to be in short supply.

Education is labor intensive. Urban districts typically spend up to 85 percent of their budgets on payroll. A labor-intensive business that cannot manage its workforce cannot perform at high levels. Voters are not going to back away from their demand for student achievement. Without flexible human-resource management policies, school districts are not going to be able to deliver high performance.

Bryan C. Hassel and Bruno M. Manno (“Charters Beset,” Forum, Winter 2003) accurately describe the reform landscape as well as the challenges and opportunities for charter schools. Now entering their second decade, charter schools can clearly be considered a disruptive technology. There is plenty of evidence that school districts, service providers, policymakers, and parents are paying far more attention to charters than the U.S. Postal Service paid to Federal Express at a similar stage of development.

However, will these new schools significantly increase achievement, create systemic change, and stimulate innovative practices? Yes, but only if several things occur. First, charter schools must focus on student achievement and show their stuff on states’ high-stakes exams. At a time of high-profile charter failures and evidence of fiscal mismanagement in a few charters, the movement can no longer fly under the flags of choice or competition. Charters must prove their academic value.

The current landscape, with rare exceptions, is filled with school districts that do not want to grant charters. Would Wal-Mart grant Target a charter to open a store across the street? Going forward, states must provide multiple authorizers. Let states, local districts, selected universities, and large-city mayors grant charters. Build the authorizers’ capacity to champion their charters and ensure their success. Assist with a charter’s ability to navigate the uncharted waters of facilities, permitting, and contracting. Consider what would happen if the U.S. Department of Education could grant charters in every state in the nation.

If charter schools are to increase achievement through competitive forces, that theory must be pilot tested. Few neighborhoods, if any, have multiple charter and noncharter public school choices. What would happen if a big-city mayor had the ability to bring six to ten independent charter schools to the same neighborhood? Would the proliferation of public school choices lead to increased achievement? Doing this in ten cities across the country would create a fantastic experiment.

Bryan C. Hassel (“Friendly Competition,” Forum, Winter 2003) is one of the finest scholars on charter schools, but he may overstate the organizational advantages of for-profit education management organizations (EMOs).

Hassel suggests that EMOs benefit from economies of scale. This is one of the biggest myths going around. First, two-thirds of every school budget is salaries, and no economies of scale are available there. In fact, in a nightmare scenario, Edison Schools may one day find itself organized by the union.

Second, I would guarantee that the overall per-pupil costs for goods and services at our tiny charter school are no greater than those of the EMOs. At the moment we’re receiving $15,000 worth of pro-bono legal work for a real estate matter. Do you think law firms are donating to Edison? Sure, Edison can buy 1,000 Dell laptops and negotiate the price, but we can glom onto the Massachusetts state contract for public schools and enjoy even more purchasing power. Like the school district, the EMOs’ ability to purchase in bulk is far less powerful than our ability to be nimble and quick.

Our “mom and pop” school probably shops more aggressively than individual Edison schools for cleaning contracts, and we probably require less cleaning since part of our school day involves kids’ doing chores like emptying the trash. At the end of the year, I suspect we’re better at getting every textbook returned in usable condition, since we’re small enough to keep an eye on those things.