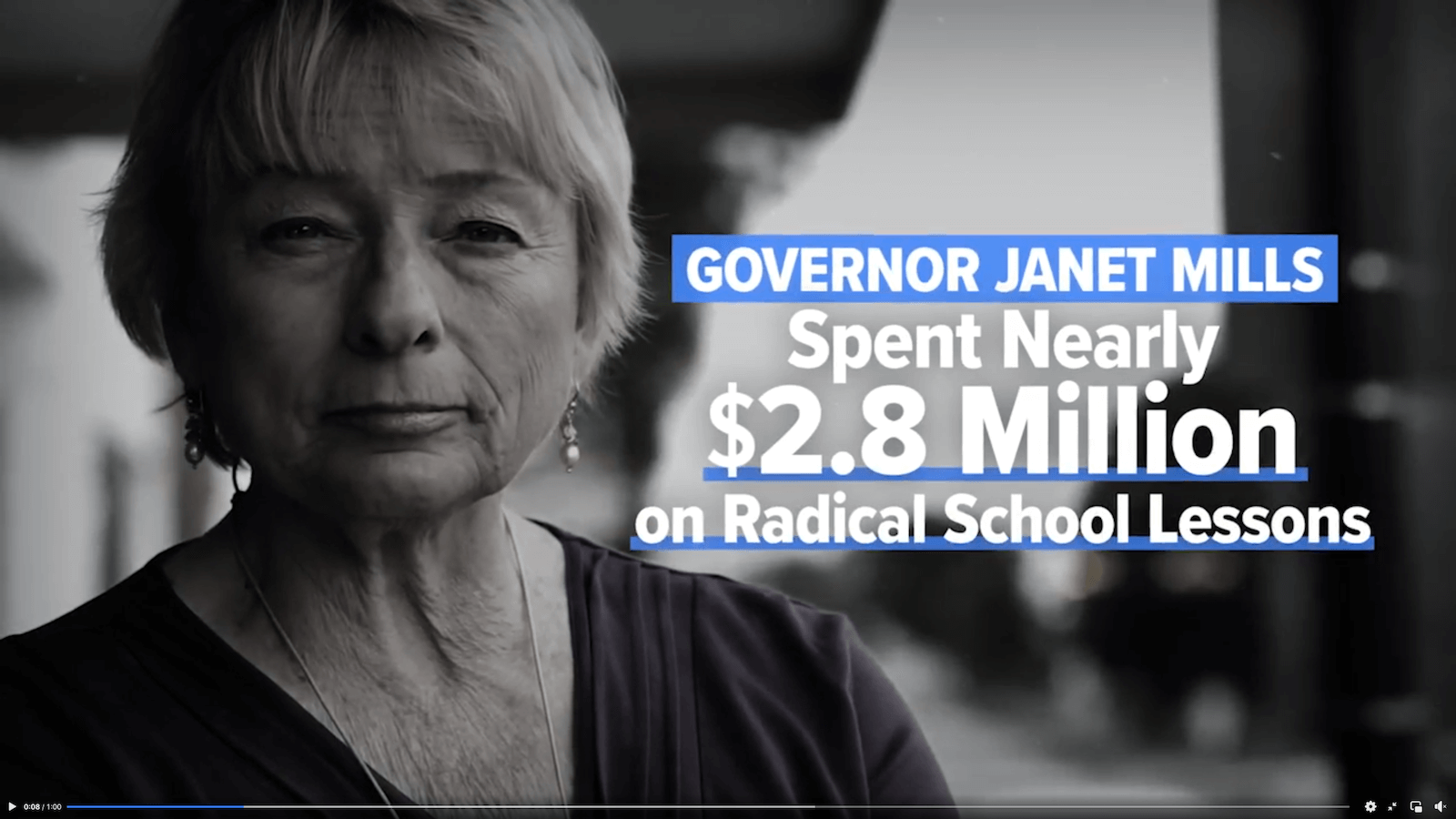 As Maine voters decide to either re-elect Governor Janet Mills or replace her with Paul LePage, who served from 2011 to 2019, education policy is a key issue.

The first television ad in the race, from the Maine Republican Party, criticized Mills, a Democrat, for spending “nearly $2.8 million” on “radical school lessons” to teach kindergarteners about being transgender. “Is this really what our kids should be learning in kindergarten instead of math, science, and reading?” the ad asked.

Curriculum content is just one of the issues attracting voter attention. The candidates have also clashed over student test scores, and both have stressed the need to focus on career and technical education. Mills has emphasized her role in increasing state funding for public schools.

A Pan-Atlantic Research poll of voting-age Mainers conducted during October 2022 asked what were the top three most important issues facing the State of Maine. Nearly a quarter of respondents named “education/schools” as one of the top three, with only “cost of living” and “inflation” rating higher.

This emphasis on education in Maine is reflective of nationwide trends this election cycle. Although economic concerns have largely taken center stage, education has quietly remained a top priority. According to a Pew Research Center poll conducted during August 2022, approximately 58% of registered voters expressed that education-related issues were to be a “very important” factor in deciding their Congressional votes this election cycle. That ranked higher than abortion, immigration, or climate change.

And in terms of governors races, the contest in Virginia in 2021 gained national attention for the way in which it placed education front and center (See “How “Mama Bears” Won a Court Victory—and Helped Elect a Governor—in Virginia,” features, Fall 2022). Following Youngkin’s electoral victory, it was forecast that “every Republican in the country is going to run on education in 2022 because of what happened in Virginia tonight.” It seems as though there may have been some truth to that prediction, particularly in the State of Maine.

While education policy has found a place in both Mills’ and LePage’s campaigns, the candidates have mostly emphasized different issues. Mills has placed at the heart of her education platform the fact that her administration fully funded public education to the statutorily-obligated 55% of the total cost. The Maine Education Association, a teachers union, endorsed Mills, accusing LePage of having “consistently shortchanged funding for schools.” Mills further highlights how she enacted “a budget that puts Maine on track for universal pre-K to two years of free community college to pandemic-impacted students.” Her education platform also speaks to investing in career and technical education in response to workforce shortages and mentions that she enacted a minimum teacher salary of $40,000.

LePage’s education platform is centered on a “Parents Bill of Rights,” consisting of policies focused on transparency, parental engagement, and school choice. Also stressed is the need to expand access to career and technical education, specifically by identifying “students who have the ability to work with their hands earlier” and introducing vocational opportunities as early as middle school. His platform also includes policies that would prioritize “education dollars to provide for after-care programs, in our schools, until 5:00 PM” and “provide teachers stipends to incentivize them to participate in formal tutoring programs, after-school, to aid children who fell behind during the pandemic.”

The candidates differ not just in terms of specific proposals, but in terms of tone and focus. The only noticeable point of overlap concerns career and technical education, although even then the candidates each work to stake claim to the issue in unique ways. LePage frames his platform with reference to parents and students, while Mills takes a more institutional approach, focusing on teachers and funding.

LePage’s “Parents Bill of Rights” has garnered a great deal of attention since its announcement in late September of this year, perhaps because its overarching philosophy is reminiscent of the conversation happening nationally surrounding curriculum and parental involvement. Mills has repeatedly criticized this slate of proposals during debates on the grounds that they would violate Maine’s tradition of local control over curriculum decisions. It’s unclear how effective that criticism will be, though, because none of the policies put forth in LePage’s “Parents Bill of Rights” actually would increase state control over curricular content.

A professor of political science at the University of Maine, Robert Glover, said he viewed LePage’s “Parents Bill of Rights” as an attempt to “capitalize on people’s passionate sentiments that something is going fundamentally wrong in their local schools.” Glover also noted that, “the reason that this has filtered up…in the state and around the country is because there is this sense, for some folks, that the curriculum is out of control and parents need to exert more control over those decisions…and that the state needs to step up.”

The State House correspondent for Maine Public Radio, Kevin Miller, said LePage’s “Parents Bill of Rights” is perhaps, to some extent, the result of replicating a national phenomenon. “Glenn Youngkin in Virginia got a lot of attention for campaigning on these issues, and it seemed to be a successful strategy there,” he said.

Miller also said the state’s tradition of local control could mean that curricular concerns could resonate less in Maine than they would elsewhere. Therefore, it makes sense that LePage’s “Parents Bill of Rights” appears to address the same fundamental concerns that have been raised in other states in a way that preserves the autonomy of local school boards. According to Miller, “LePage basically said that he’s not looking to put in place any state policies…and is still saying it’s a local issue….his administration would make sure schools are more transparent about what’s being taught and would give parents more information so they can figure out what’s going on in their children’s schools.” With this approach, LePage has been able to offer parents who may be worried about the content their children are being exposed to a solution that would empower them without implying that he, as governor, would railroad local school boards.

Although school choice has not featured prominently in either campaign’s messaging this election season, it has been present in the background. In LePage’s case, he included as the final tenet of his Parents Bill of Rights that “the money should follow the student,” specifically advocating that “parents should be able to decide whether a public school, private school, charter school, or parochial school best fits their students’ needs.” Despite its inclusion in his signature slate of policies, LePage seems to have spoken little about his position regarding school choice on the campaign trail. The practice in the state of paying for private or public schooling in districts that don’t operate their own public schools, known as town tuitioning was the subject of a 2022 Supreme Court decision, Carson v. Makin.

As far as Mills is concerned, the issue of school choice has essentially been absent. That said, language often used by advocates for educational freedom has appeared in her education platform. The platform states that “she believes that all children deserve equal access to the same opportunity to attend quality schools, regardless of where they live in Maine.” Mills has also repeated this phrasing during gubernatorial debates. Her solution to the problem of unequal educational opportunities is funding rather than choice, and she frequently mentions achieving the 55% threshold for public school funding.

Although Mills and LePage both stress the importance of expanding access to career and technical education in Maine, they approach the problem in slightly different ways, each attempting to claim the issue as their own. Mills’ campaign website asserts that: “Janet knows that our Career and Technical Education Centers (CTE) are an invaluable resource in solving Maine’s workforce challenges.”

Similarly, LePage states on his campaign website that: “Introducing vocational and technical education to students in high school is TOO LATE. We must introduce vocational and technical education to children in middle school. We need to identify students who have the ability to work with their hands earlier, and provide them with good-paying career opportunities they can pursue into high school.”

Maine’s governor in 2023—whether LePage or Mills—will have to address the state’s longstanding education issues along with the newer challenges of pandemic learning recovery and intense conflicts over curriculum. The fact that these issues were so salient in the election campaign will mean that whichever politician emerges as the victor will have some claim to a mandate in moving to improve the state’s schools along the lines proposed in the campaign.

Libby Palanza, a Maine native, is an undergraduate at Harvard College studying government.