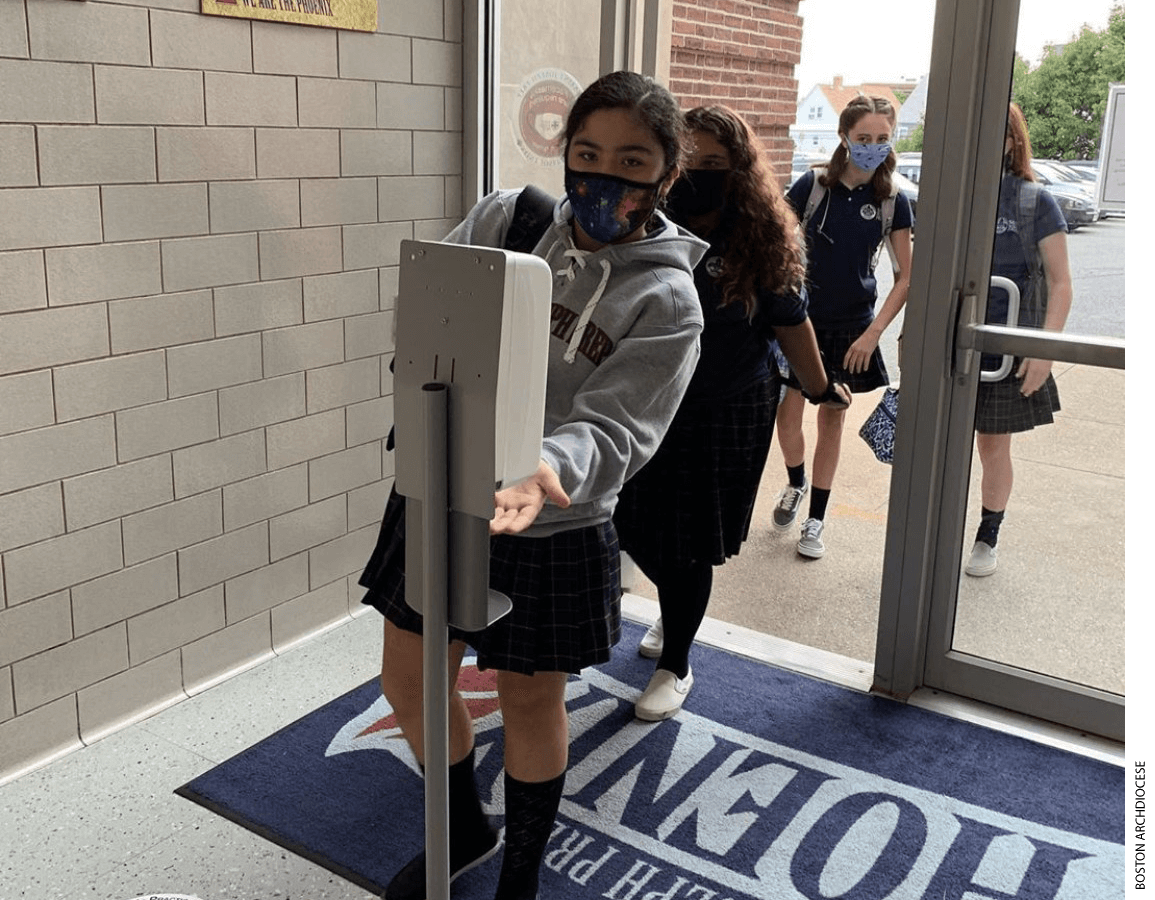 When the superintendent of Boston’s Catholic schools announced over the summer that the district’s 100 schools planned to reopen for in-person learning in the fall amid the pandemic, not everyone was pleased.

“I was getting emails from non-Catholics: Are you going to go to the funerals of every single child that you are going to kill by reopening the schools?” the superintendent, Thomas W. Carroll, recalled in an interview with Education Next.

Four months later, the concerns about school-based spread of Covid-19 seem, in retrospect, to have been misplaced. “We’re not aware of a single case of someone being hospitalized,” let alone fatally infected, Carroll said. Active cases, among a population of 35,500 students, teachers, and staff, have been running in the dozens, “a tiny fraction of one percent,” in Carroll’s words. The experience has been cited by Massachusetts Governor Charlie Baker and by the Wall Street Journal editorial board (“Covid and the Catholic Schools”) as a demonstration that in-person learning, properly done, is not a risk to public health.

“The Catholic Church is the one following science, and the public schools, who worship at the altar of science—they are basically the flat earth people,” said Carroll, who started in Boston in April 2019 after having previously run a network of charter schools in Albany, New York.

“We opened in person, and we learned something that was of great use to everybody else,” Carroll said, observing that as the months wore on and evidence accumulated, more conventional public health spokespeople such as Dr. Anthony Fauci and the Centers for Disease Control and Prevention became more assertive that the default position should be for schools to be open for in-person learning during the pandemic. Carroll called it, with a trace of provocative humor cloaking a serious point, “a good test case for why people should listen to the Catholic Church on scientific and health matters.”

I was curious about the “how” of Boston-area Catholic schools’ in-person re-opening but also about the “why”—and about how the decision may affect the post-pandemic-trajectory of these schools, which, like Catholic schools nationwide, have seen years of declining enrollment (see “Who Goes To Private School?” Fall 2018).

The district serves an area covering 144 cities and towns, stretching from the New Hampshire border in the north, to Plymouth in the south, and west of Boston past Framingham, almost to Worcester. In the spring, the school buildings closed and converted classes rapidly to online instruction, as the Archdiocese closed its schools as a precaution even before the governor and mayor ordered schools shut statewide. The economic downturn resulting from the pandemic and lockdowns hurt the Catholic schools, which rely on parents’ ability to pay tuition that averages at the elementary level about $7,000 a student. Eleven of the Catholic schools closed, and overall enrollment fell by 5,700.

Over the summer, “we just all decided we didn’t want to do remote anymore,” Carroll said. “The teachers did not want to be doing stuff from home anymore.” Parents wanted to return to the workplace without leaving children at home alone learning remotely all day. Or the parents wanted to work from home without having children underfoot. Cardinal Seán Patrick O’Malley, the archbishop of Boston, and his cabinet and its medical advisers were consulted.

“It wasn’t a decision. It was more a universal impulse. We just reopened—safely,” Carroll said.

For parents who were nervous or students who had grandparents at home with health conditions that put them at high risk, arrangements were made to livestream classes. Two schools, South Boston Catholic Academy and Saint Peter School in Cambridge, organized testing. Masks and cleaning supplies were purchased and prepositioned.

On July 15, Boston and statewide teacher unions announced that public schools in Boston and elsewhere would open nearly three weeks late—and then remote-only. “When that hits the 6 o’clock news, the phones at 100 Catholic schools are ringing off the hook,” Carroll said, joking that he should send a thank you note to the unions. “We picked up more than 4,000 students. My guess is about 80 percent of them were public school refugees.”

Carroll said the Catholic religious tradition sees all children as created in God’s image: “If you actually believed that, you wouldn’t block the schoolhouse door to disadvantaged children who need to be in school—all because adults don’t feel like going to work.”

He also said the Catholic tradition emphasizes community, describing it as “so unbelievably dysfunctional” for a child to have never met physically their teacher or classmates. And he said the schools were originally set up for the purpose of evangelization. “Evangelization and religious formation is an in-person activity,” Carroll said. “In our schools, we have regular Catholic masses, and we believe that forming the souls of children requires us to be physically present with them.”

He said the in-person reopening had been supported by Massachusetts elected officials who are sensitive to religious issues. “You have a Democratic mayor of Boston and a Republican governor communicating similar public health messaging,” he said. He describes the cooperation in Boston as “a completely different approach” from New York, where Mayor Bill de Blasio and Governor Andrew Cuomo, both Democrats, have openly clashed over school closures and other coronavirus-related issues.

Federal Paycheck Protection Program loans and the flood of “public school refugees” helped the schools temporarily, but the financial pressures are real. The schools have lost revenue from afterschool and before-school care programs no longer needed by unemployed or work-from-home parents. Preschool enrollment is also down as some parents have opted to keep their younger children at home. Fundraising galas are canceled. On a per pupil basis, the Boston area Catholic schools spend roughly half of what public schools in Boston and surrounding suburbs spend. Boston Public School teachers earn an average of $94,563 a year, according to the school district, while teachers in Catholic schools, who are not unionized, earn about half that annual wage.

Whether the new students stay or “melt back into the public schools” when the pandemic is over is an open question. Carroll sees a possibility that the combination of vaccine hesitance among minority parents and teacher-union reluctance to venture into schools until everyone is vaccinated mean that Boston Public Schools may have trouble returning to in-person learning even in the 2021-2022 academic year. Another pool of potential recruits, he says, are students shut out of Boston’s exam schools by a new system that gives admissions preferences to lower-income neighborhoods.

“Our challenge is living to fight another day,” Carroll said. “We just have to get to the other end of the pandemic.”

Stoll, I. (2021). How Boston-Area Catholic Schools Opened for In-Person Learning amid the Pandemic: “Forming the souls of children requires us to be physically present with them,” says superintendent, as “public school refugees” add to enrollments. Education Next, 21(2), 91-92.