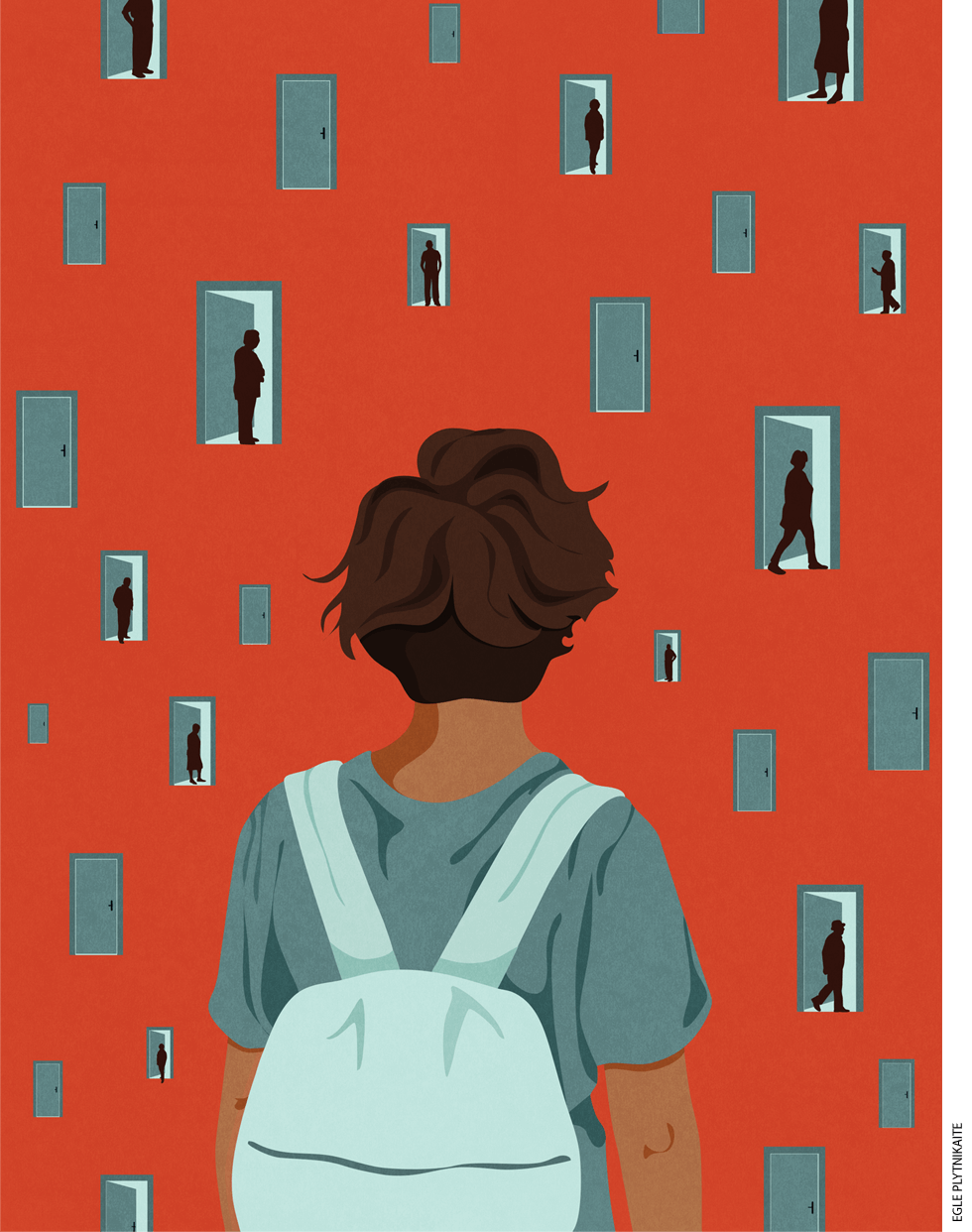 Inequality in educational outcomes is substantial and persistent in the United States. Students from high-income families outperform those from low-income families on achievement tests, are more likely to graduate high school, and are more likely to earn a college degree. Black and Hispanic students also earn lower scores on standardized tests, on average, and are less likely to graduate high school and go to college than white and Asian students.

While there are many possible explanations for these differences, one frequent hypothesis is that high-income white and Asian students are taught by more effective teachers. After all, evidence shows that teachers vary a great deal in their impacts on student learning, and that students taught by the best teachers have higher test scores and better outcomes in adulthood, including greater likelihood of college attendance and higher wages.

Studies also have found that teachers working with low-income students, on average, tend to be less experienced and have fewer qualifications that teachers working in high-income communities. In response, federal law currently requires states to ensure low-income students “are not served at disproportionate rates by ineffective, out-of-field, or inexperienced teachers,” and states like Washington offer bonuses to teachers with advanced credentials who work in high-poverty schools. However, more experience and better qualifications do not guarantee better teaching.

We look at student demographics and several measures of teacher quality in 26 public school districts across the United States over a five-year period. We find that, in fact, low- and high-income students have nearly equal access to effective teachers. Effective teachers are found in high-poverty schools, even if their accomplishments are often overlooked because their students typically start out far behind. Conversely, ineffective teachers can be found in high-performing schools, where the impacts of subpar instruction can be camouflaged by students’ other advantages.

Our analysis also suggests that it would take wholesale reassignment of the most effective teachers to the least advantaged students to substantially reduce inequities in learning outcomes, and that differences in the likelihood of low-income and minority students being taught by a novice teacher contribute a negligible amount to gaps in student achievement. The inequitable outcomes experienced by low-income and minority children may have less to do with their teachers and more to do with the supports and resources available to children of greater means.

Which Students Have High-Quality Teachers?

If low-income students were more likely to have less-effective teachers year after year, key questions would include how the effects of those teacher assignments accumulate over time and what contribution that would make to the student achievement gap. To explore these questions, we developed the “effective teaching gap” calculation, which measures average differences between low- and high-income students in access to effective teachers and can be extended to answer questions beyond the average gap in one year.

Data: We focus on the five-year period from 2008-09 to 2012-13, using data on teachers and students in 26 medium and large school districts. The districts are located in 15 states, distributed across all four Census regions, and operate in different geographic areas and under different conditions. The size and geographic diversity of our sample ensures that our results will not be influenced by idiosyncratic conditions in a single district or state and permits us to assess regional variation in access to effective teachers. We look at data on reading and math teachers in grades 4 to 8, students’ scores on statewide tests in grades 3 through 8, and student characteristics such as race and free or reduced-price school lunch status. Our data allow us to track teacher effectiveness from 4th to 8th grade in 12 districts. In the others, we track teacher effectiveness from 6th to 8th grade.

The students in our sample are more likely than average to live in cities and be low-income or Black or Hispanic. Some 69 percent live in large cities and 63 percent qualify for free- and reduced-price school lunch, compared to 46 percent and 53 percent of U.S. students nationwide, respectively. Forty-two percent of students are Hispanic and 29 percent are Black. On state assessments, the average student in our sample scores at the 45th percentile in English and the 46th percentile in math.

Our analysis of teachers’ value added accounts for a range of student characteristics, including limited English proficiency, special education status, race, gender, and whether a student transferred across schools during the year. We also account for three types of potential peer effects: the average achievement of students in the classroom at the end of the prior school year, the amount of variation in student achievement within the teacher’s classroom, and the proportion of students in the classroom who are eligible for a free- or reduced-price lunch. We do this to account for the possibility that the characteristics of others in the classroom, such as their prior academic achievement, influences a student’s performance independent of the quality of the teacher.

We then calculate how the cumulative effect of the effective teaching gap translates into changes in the student achievement gap over multiple years. This takes into account the student’s incoming achievement level, contribution of family and other out-of-school factors, and the fact that the impact of an individual teacher’s effectiveness fades over time. We estimate the extent of this fade-out using estimates from the value-added model of how students’ test scores from the prior year are related to their test scores in the current year. We also estimate how student achievement gaps would change if low- and high-income students had equally effective teachers between Grades 4 and 8 (or between Grades 6 and 8, depending on what data are available).

Finally, we investigate the extent to which disproportionality in rates of placement with novice teachers could lead to greater inequity for low-income students, by documenting the proportion of teachers with less than three years of experience working at high-poverty schools, where at least 90 percent of students qualify for free and reduced-price school lunch. We compare that to the proportion of novice teachers at schools where less than 60 percent of students qualify for meal subsidies. We also examine the average difference in value added between novice and veteran teachers. 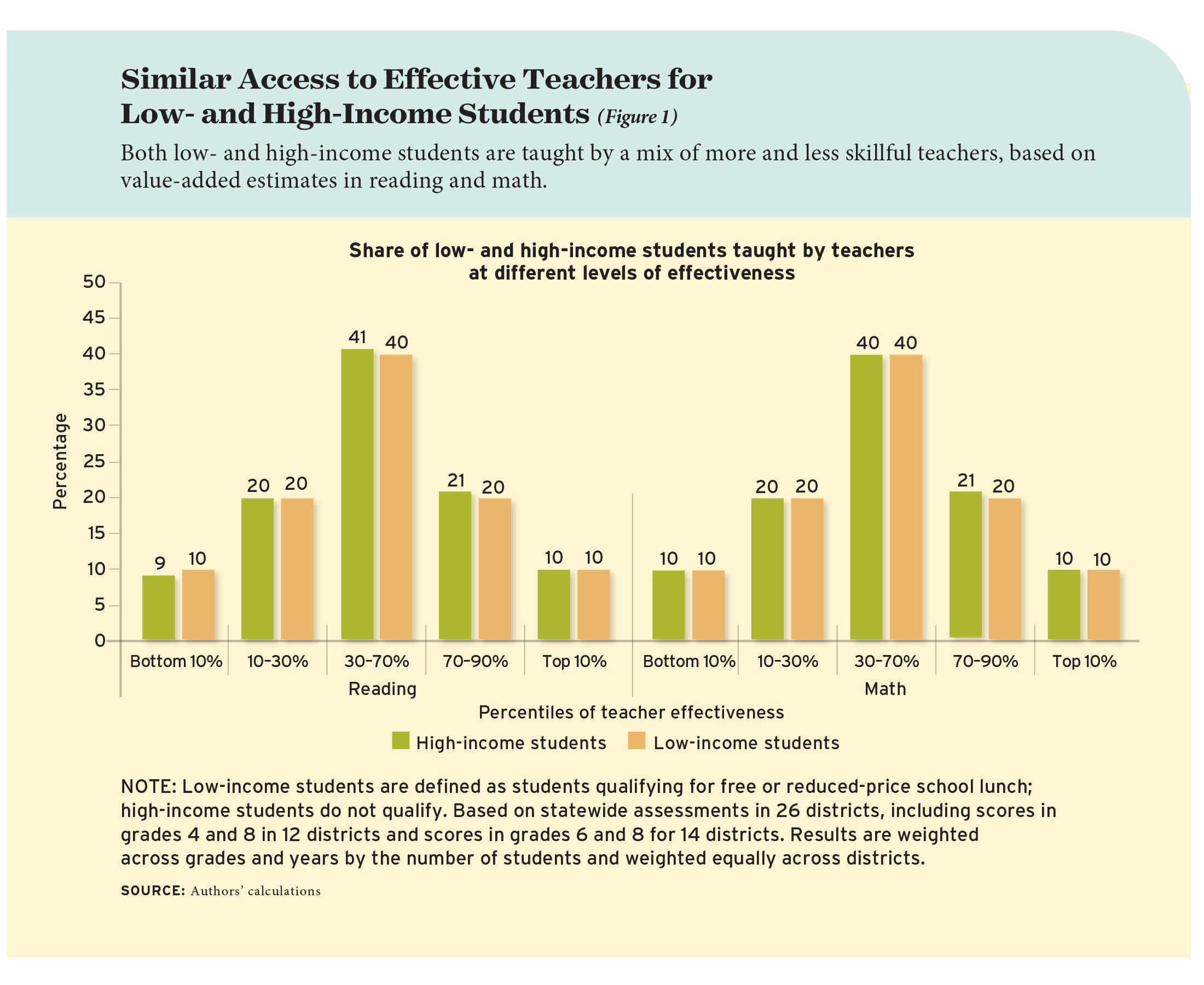 Black students also have teachers who are less effective than those who teach white students, on average, but only in math. The effective teaching gap in that subject is 0.01 standard deviations. We find no gap in teacher effectiveness in reading. In both subjects, there are no significant differences between teachers of Hispanic and white students, or between teachers of English learners and students who are not English learners.

The absence of large effective teaching gaps in the districts we study implies that closing those gaps would have little effect on achievement outcomes. To demonstrate this, we first model the impact of all low-income students having teachers who are at least as effective as those of high-income students, from 4th through 8th grade. We find it would have relatively little effect.

Even though there is relatively little inequity in students’ access to effective teachers on average, there could be individual districts with greater inequity than others. We explore this possibility and find modest variation at the district level, with effective teaching gaps ranging from -0.024 to 0.023 standard deviations in reading and from -0.050 to 0.040 standard deviations in math. In other words, there are some districts where low-income students have less-effective teachers than high-income students, on average, and other districts where the opposite is true.

This raises the question of whether certain types of district characteristics are associated with greater inequity in access to effective teachers. We look at a variety of characteristics and find two that are significantly related to the effective teaching gap in both math and reading: district size and region. Districts that are larger and located in the southern United States tend to have a less equitable distribution of teachers compared to other districts. These findings are related, as districts in the South tend to be larger than those in other regions. Low-income students’ access to effective teachers is not consistently related to the other district characteristics we consider, such as the student achievement gap, the extent to which high- and low-income students are separated across schools, or the percentage of Black, Hispanic, and white students in the district. In reading, the effective teaching gap is significantly larger in districts with a greater percentage of low-income students and those with a greater percentage of minority students, but these relationships are not evident in math.

Second, the average difference in the effectiveness of novices and veteran teachers is also modest. Thus, even if all low-income students were taught by novices and all high-income students were taught by veteran teachers, the effective teaching gap would be 0.022 standard deviations. The actual difference in the proportion of students taught by a novice teacher is only 4 percentage points. Therefore, the component of the effective teaching gap resulting from low-income students being taught more frequently by novice teachers is approximately 4 percent of 0.022 standard deviations, or slightly less than 0.001.

The findings of our study—based on a cross-section of medium and large public school districts throughout the United States—suggest that a policy emphasis on correcting for an unequal distribution of “ineffective, out-of-field, or inexperienced teachers” (as required by the federal Every Student Succeeds Act of 2015) is misplaced. Value-added estimates identify effective and ineffective teachers in all types of schools. Student test-score data show that high- and low-income students are far apart in their achievement by the end of 3rd grade, and that this achievement gap grows little due to inequitable access to effective teachers.

It may not be reassuring that public schools are just holding the line on a set of unequal outcomes instead of decreasing them. However, public schools are financed and managed within a political system. Our simulation results suggest that it may be difficult to jolt this system and bring about a substantial decrease in achievement gaps through teacher mobility alone. This is not to concede that policymakers need to accept the status quo. But the best policy response likely resides outside the realm of teacher recruitment, school assignment, and retention. Although a well-planned and well-executed set of human capital policies can improve teacher effectiveness overall, that approach alone is not likely to diminish the student achievement gap.

Rather, our results might nudge policymakers to consider a broad spectrum of other cost-effective, evidence-based policies. For example, experimental evidence supports the expansion of tutoring. In addition, well-implemented early-learning programs may disrupt the predictability of student achievement gaps that are already apparent when children enter school. Other experimental evidence demonstrates that coaching teachers can boost students’ literacy levels in the early grades (see “Taking Teacher Coaching to Scale,” research, Fall 2018).

A half-century ago, James S. Coleman’s landmark “Equality of Educational Opportunity” report to Congress declared “differences between schools account for only a small fraction of differences in pupil achievement.” With more sophisticated methods, easier access to data, more computational power, and the ability to take the analysis from the school level to the teacher level, we have concluded much the same thing.

Eric Isenberg is senior study director at Westat. Jeffrey Max is principal researcher at Mathematica, where Philip Gleason is senior fellow and Jonah Deutsch is senior researcher. This article is based on the study “Do Low-Income Students Have Equal Access to Effective Teachers?” published in the June 2022 issue of Educational Evaluation and Policy Analysis.