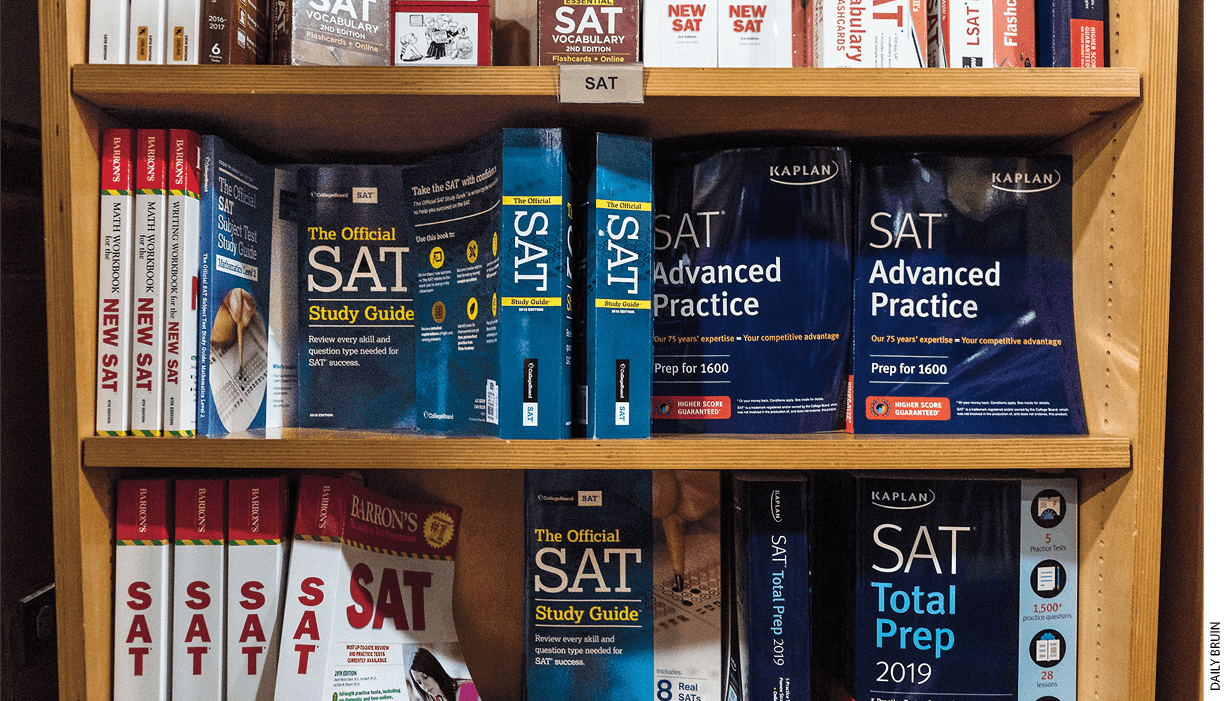 After May and June test dates were canceled because of the pandemic, the College Board’s first SAT administration since March took place at the end of August. Originally the test was to be offered to 402,000 students; as of August 18th, 178,600 of them were unable to test. Pent up demand from missed test opportunities (ACT also canceled its April test), on top of the fact that many testing sites have canceled their August administration, has created a chaotic testing environment. Excess demand for college admission testing combined with opaque test-optional policies benefits no one and may actively harm some students.

For affluent and hyper-aware parents, the limited supply of testing opportunities has created a mad dash for multiple registrations at the few remaining test openings. The College Board’s Facebook page is filled with hundreds of comments from upset parents. The parents are frustrated that tests were canceled after extensive efforts to snag a seat. One parent asked outright, “Which states/cities are allowing tests to take place? At this point we’ll hop on a plane and fly across the country if we have to. We are feeling desperate!” That same parent later commented that she had planned to drive nine hours for a test, but it had been canceled. As sites in urban and suburban areas fill up or cancel, these “eager testers” are exploring other options—often distant, rural communities.

Consider Virginia. For the next test date, September 26, there are no open test sites within 75 miles of downtown Richmond and no open test sites in the Hampton Roads area, according to the College Board’s test-registration website. One rural high school in Virginia initially offered more than 100 seats for the August test, according to a school professional. Fewer than 10 percent of the students who registered attended that high school; more than 90 percent came from other communities and states, including New Jersey, Maryland, and North Carolina. At least one student planned to fly to the test, and others were renting hotel rooms nearby. The school decided to cancel its August administration because of safety concerns and the logistical challenges of hosting the test.

Other Virginia high schools did go on with test administration. Another school professional explained that at a small high school in southern Virginia, only 10 of 30 seats went to local students. At least one student came from Maryland, about five hours away.

These eager testers may actually exacerbate the public health crisis as small, rural sites see their testing rolls filled with students from other communities and states. Fifty students (who may arrive with parents and siblings) from out of state descending on a small town is likely a far greater threat to public health than testing among 50 kids from same community. Test sites have not been without coronavirus cases, as at least two students who took the ACT in July tested positive for Covid-19.

These machinations are in line with findings by those who have studied the process of college preparation and applications, as strategic behaviors tend to increase with scarcity and are most concentrated in affluent areas.

Even before Covid-19, analysts and policy makers had identified substantial differences by geography and family circumstances in access to college admission testing opportunities. Opening a new administration site tends to increase test taking for students who attend that school and neighboring schools; closing sites decreases test taking. Retake rates for the SAT increase with family income, and white and Asian students are more likely to retake the test than Black or Hispanic students.

Research also shows that low-income and under-represented minority students are less likely to have taken their first SAT as juniors. As their senior years begin, many of these students may find their local sites canceled or oversubscribed with students from other places.

For low-income students, either rescheduling tests canceled in the spring or registering over the summer for tests in the fall has been further complicated by the antiquated and ad hoc fee waiver distribution mechanism. Until this school year, counselors distributed paper fee waivers, which required student and counselor signatures. In the spring, students who had received fee waivers were unable to reschedule testing online, and the College Board website could do no better on its FAQ for students who had fee waivers than: “I have fee waiver benefits but am not able to register online for June 6 using a fee waiver. What can I do? Call Customer Service….” Calling Customer Service proved futile. For students who had yet to receive a fee waiver, the guidance provided by College Board was no less convoluted for students who were not attending in-person classes: “Your school determines your fee waiver eligibility so please make sure to contact your school counselor or principal before the end of the school year to get a fee waiver. If you’re not able to reach them before summer then please contact them as soon as school begins again so that they can validate your eligibility and provide you with a fee waiver.” Thus, students who had not received fee waivers in the spring would likely be delayed until the start of school in August or early September to receive fee waivers, and at this point, few seats are available for the September and October test administrations. Even if these students do eventually access fee waivers (which will now be distributed digitally), low-income students will likely have the most difficulty traveling substantial distances from their communities for testing.

Well before the pandemic, there was active policy debate about how (and even whether) to use SAT or ACT scores in the context of other measures of student performance at selective colleges. With the unfolding uncertainty around testing, liberal arts colleges and eventually research universities gravitated toward test-optional. Yet, with the exception of a very small number of colleges that went test blind (e.g. Caltech), most colleges opted for “test optional,” which leaves the decision in the hands of students.

Those test-optional policies are, at best, opaque. Some schools are not as test-optional as they initially appear: Virginia Commonwealth University, for instance, allows a student to request test-optional review of their application—if that student has above a 3.3 GPA. But students who want to be considered for merit scholarships or VCU’s Honors College are not allowed to request test-optional review. The “option” part of “test optional” really only applies to students who have access to admission test sittings and can “choose” whether to submit scores. (In the days after the publication of this blog post, VCU changed its policy to indicate that “all applicants will be eligible for test score optional review, regardless of GPA.” For students applying to the Honors College, test score submission remains a requirement in the absence of extenuating circumstances.)

Informed students and parents will approach the test-optional decisions strategically, conferring with admissions counselors, researching the distribution of scores for accepted students in prior years, and choosing to submit their scores only if they expect their scores will increase the likelihood of acceptance. The uncertainty facing students (and their parents) about submission is demonstrated by the deluge of calls and emails to college admissions offices looking for clarification about the benefits of test submission.

And, to the extent that limited access to college admission testing disproportionately affects students from low-income families, these students may be less likely to apply to a broad range of high-quality colleges and universities, because one avenue for “outreach” has been disrupted. Like it or not, if colleges and universities cannot identify high-achieving, low-income students it becomes much more difficult to communicate messages of affordability and opportunity.

All this when many students are physically disconnected from counselors and other college access professionals who might help them navigate this landscape.

While reasonable people can disagree about the optimal role of standardized tests in college admissions, the Covid-era combination of test-optional policies and limited access is shaping up as a worst-case scenario from an equity perspective.

The full contours of the Covid-19 crisis could not have been predicted. That said, strategic behavior among relatively advantaged students and the adverse impacts on the least advantaged are predictable. That “test-optional” policies combined with limited options for college admission test-taking would exacerbate inequality is clearly evident to practitioners working with students in high schools and academic researchers.

Colleges and universities, along with testing agencies, need to act now to mitigate these problems and provide clear guidance to students. Colleges can redefine “test optional” in a way that gives all students a viable “option.” They can encourage the submission of local testing measures which are taken by all high school students in a state, such as the Standards of Learning exams in Virginia. Colleges may also consider a fully “test-blind” admissions policy. In cases where admission testing provides valuable information, colleges can extend the deadline for testing to early spring, or the February and March test administrations. And the colleges can consider other standardized instruments (and, potentially, interview formats) that allow high school students to convey skills and preparation. With thousands of four-year colleges and universities in the U.S. that differ markedly in scale, selectivity, and specialization, the approach that makes the most sense will depend on institutional circumstances.

As for the testing agencies, they need to provide full disclosure to colleges and universities, along with high schools, about the excess demand for testing. That will allow college admissions offices and high school counselors to adjust to better promote equity. The test agencies would be wise to limit test seats to local students; this is a public health issue as well as an equity issue. In high schools that can operate in-person for all or some of the time, there may be opportunities to work with schools to add additional “school day” test administrations. As nonprofits, the ACT and the College Board have a responsibility to minimize differences in access to testing by socioeconomic status.

Without additional policy adjustments, the coming college application season will surely feature not only long trips for college admissions test administrations that carry risk of spreading the virus—but also increased inequality in a college market that had too much of it even before the pandemic.

Jordan Arnold is an adviser in the College Advising Corps, which works to increase the number of low-income, first-generation college, and underrepresented high school students who enter and complete higher education. Sarah Turner is university professor of economics and education and Souder Family Professor at the University of Virginia.