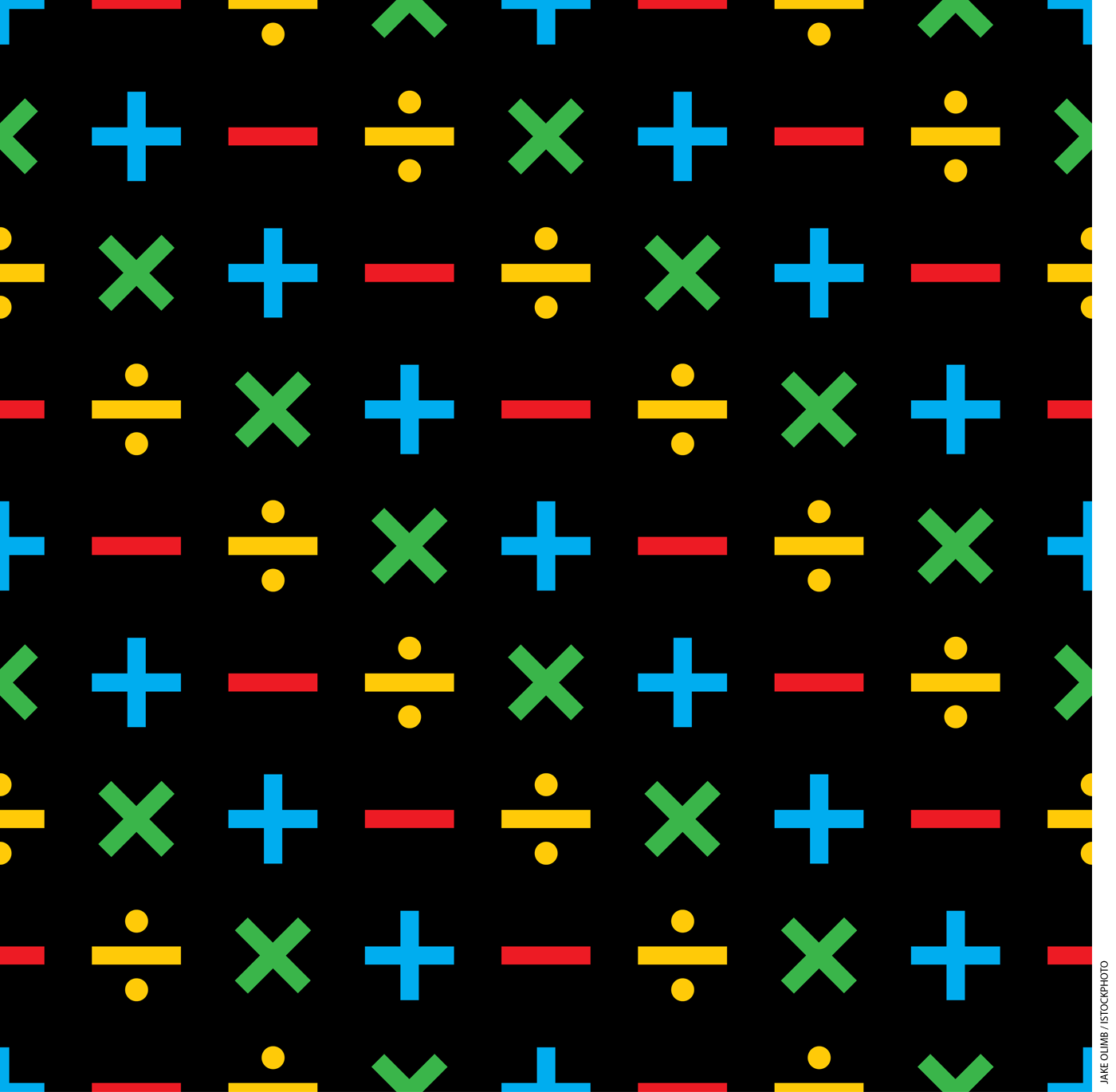 For many years, Professor Jo Boaler has provided extraordinary takes on math education from her bunker at Stanford University in California. For example, there was the time Boaler claimed that a mistake makes your brain “grow” even if you are unaware that you have made one. Then, there was the time that Boaler claimed that it was terrible to ask students to memorize times-tables, suggesting she had never memorized times-tables herself and that this had not held her back as a professor of math education (a revealing admission). And we must not forget all those times Boaler has claimed that timed tests cause math anxiety and yet, when you follow the citation trail, the evidence to support this claim appears to be lacking. [Boaler’s book Limitless Mind was reviewed by Daniel Ansari in the Spring 2020 issue of Education Next under the headline “The Case for Limitlessness Has Its Limits.”]

Nevertheless, the good citizens of California decided to ask Boaler to help redesign their math curriculum.

Boaler is probably best known for her “Railside” study. This study involves a long-term comparison of three schools, one of which, Railside, taught math in a “reform-oriented” way that avoided a focus on “executing procedures” and instead set-up problems that students could solve in a number of different ways. This sounds like a variant of problem-based learning. Although the wider evidence suggests problem-based learning is ineffective, Boaler found that, “Compared with the other two schools in the study, Railside students learned more, enjoyed mathematics more and progressed to higher mathematics levels.”

This is where the tale takes a dark turn. In 2012, Wayne Bishop, Paul Clopton and James Milgram, three Californian math professors, released a preprint paper (i.e. it was not peer-reviewed or published in a journal). Boaler never identified the schools in the “Railside” study, preferring pseudonyms, but Bishop et al. claimed to be able to identify them from the data presented in her paper. On this basis, they argued that Boaler’s conclusions were unsound. Boaler then published an article about “attacks by Milgram and Bishop,” alleging their behavior constituted bullying.

Whoever is right about the facts of this case, it does not take the kind of investigation conducted by Bishop et al. to note a fundamental flaw with the Railside study. Even if it really does show that students at Railside did better than at the other two schools, it is still a study of just three schools. As clearly described in the abstract, the schools are not even similar to each other. Unless you believe that every single reform-oriented school is worse than every single non-reformed-oriented school, the results prove nothing. I am pretty sure that if I was given the whole of California to choose from, I could replicate these results in reverse.

I am not claiming that Boaler chose the schools in order to obtain a particular set of results, I am claiming that the results she obtained could have arisen purely by chance and therefore prove nothing. This is why in randomized controlled trials, rather than having one or two items in each condition, there are usually tens or even hundreds.

And this is not the first research of its kind. Boaler conducted a similar study in London before she moved to the U.S. This time, only two schools were involved, “Amber Hill” and “Phoenix Park.” Again, Boaler claimed that the reform-oriented school was somehow better than the other one and again, this proves nothing.

Nevertheless, Boaler is a math-education rock star. Her Youcubed maths teaching website has a hit counter that reads over 54 million at the time of writing. Youcubed hosts many of Boaler’s papers, repeats her claim that “mistakes grow your brain” and her claim about the link between timed-tests and math anxiety, while also loudly trumpeting the concept of “Data Science.”

Boaler was a supervisor of Dan Meyer when Meyer was completing a PhD at Stanford University. Meyer is probably best known for his 2010 TED Talk in which he argues that the math problems we give to students need to be more open and less structured, giving fewer clues as to how to solve them and including extraneous information. For many years, the motto on his blog site was “less helpful.” This approach is at odds with what we have learned from cognitive science and is likely to overload students who are learning a particular set of math concepts for the first time. Nevertheless, in 2015, The New Republic declared that Meyer was, “The Man Who Will Save Math.”

The media cannot get enough of this stuff.

So, where does “Data Science” fit in? It seems that Boaler favors a problem-solving approach in math lessons where the teacher acts as a hands-off facilitator. I am sure this is for the right reasons and she genuinely believes it is more effective. And yet if you throw a quadratic functions problem, or even one requiring the manipulation of linear algebra, in front of students who don’t know the relevant math, they won’t know where to start. Even if you set it up so that the problem makes sense, the chances of them inventing the right algebra to solve it are slim. Those students who are already at a disadvantage will fail to learn.

Rather than question the premise that a problem-solving approach is best, an alternative is to change the math you want students to learn so that problems can be tackled by students with little knowledge and with minimal teacher instruction. Teachers who take a problem-based approach often stress that they are developing problem solving skills rather than well-defined procedural or conceptual knowledge. This accounts for the profusion of activities we often see listed in curriculum documents, such as the recent draft Australian math curriculum, where the elaborations include statements like, “using digital tools to create tessellations of shapes, including paver and tiling patterns.” Why would you do this? What is the purpose? The purpose is activity and the hypothesis is that engaging in math-type activity = learning mathematics.

Similarly, if you throw a bunch of data at students, they can group it, type it into a spreadsheet, plot graphs, and so on. It’s pretty easy to convince yourself they are doing something called “Data Science.” They don’t have to do anything particularly useful with the data because there are no right answers (and mistakes grow your brain anyway). This may explain why Boaler has pursued the objective of remaking the Californian High School Curriculum around “Data Science.”

To understand what that looks like, you first need to understand how U.S. states structure their high school math courses.

Unlike Europe, Australia and many other jurisdictions, the U.S. high school math curriculum (Grades 9-12) has evolved to constitute a set of discrete courses that address different aspects of math. The courses are:

The immediate problem this represents is that each of these five courses assumes knowledge of the previous courses in the sequence and lasts for a year. However, high school in the U.S. only lasts four years. If a student wants to complete Calculus before college, an effective prerequisite for many prestigious undergraduate science and math courses, the student and the school somehow need to speed the process up.

Traditionally, the way this is done is by allowing students to take Algebra I in the eighth or even seventh grade, something encouraged by a U.S. Department of Education push that seeks to expand access to Algebra I in the eighth grade. Not only does the draft Californian Mathematics Framework, co-authored by Jo Boaler, seek to discourage schools from offering Algebra I in Grades 7 and 8, it arguably seeks to supplant the traditional sequence of courses with “Data Science” units.

To those outside the U.S., the commitment to the traditional sequence can seem parochial. The contents of “Algebra I” are spread across multiple year levels in my Australian school, starting in about Year 7 and ending at around Year 10, although there is not a complete correspondence. However, it seems that any call to change the traditional sequence is generally used by reformers in the U.S. as a Trojan horse for changing teaching methods.

OK, so I have made some pretty big claims. However, if you want to know the evidence behind them, this document by Boaz Barak and Edith Cohen deals with these points in detail. Perhaps the most contentious is the idea that the new framework seeks to disrupt and supplant the old sequence of high school mathematics courses. In theory, the curriculum is intended to be neutral about this. However, video evidence that Barak and Cohen draw upon shows Boaler explaining that the authors have not updated the traditional sequence to make it as “vibrant and interesting” as the new Data Science pathway, “because it would give the message that both of these are equally important for kids.” Boaler also suggests that Data Science units allow for more “inclusive” and “equitable” teaching practices than the alternatives. This does not strike me as neutral.

Moreover, I am not convinced that the kind of teaching practices promoted by Boaler are inclusive and equitable. In the moment, they may allow students with little mathematical knowledge to interact with a problem alongside students with more mathematical knowledge. However, inclusion and equity should be about ensuring that class, race, gender and other personal characteristics are no bar to developing high-level mathematics skills. If you provide students in regular public schools a watered-down diet that does not give them fluency with algebra and an introduction to calculus, you do them no favors. These students will be competing for entry to college against students who could afford private tutors or private schools that can make up for these deficiencies.

An open letter signed by hundreds of mathematicians, researchers, software engineers and others with an interest in the mathematics curriculum makes this point clearly:

“Such a reform would disadvantage K-12 public school students in the United States compared with their international and private-school peers. It may lead to a de facto privatization of advanced mathematics K-12 education and disproportionately harm students with fewer resources.”

There is an obvious answer to this argument that reformers such as Boaler could reach for—colleges need to reduce their mathematics entry requirements. Yet, this just kicks the can down the road. At some point, advanced societies really do need mathematicians, scientists and engineers who are fluent in advanced mathematics. Those societies will either have to teach students algebra and calculus, regardless of whether such content lends itself to supposedly equitable and inclusive teaching methods, or they will need to import graduates from overseas who can do the math for them. If we can agree that at least some mathematical talent must be home-grown, why not grasp this nettle earlier, in Grades 7 and 8?

I am sure reformers such as Jo Boaler want the best for students. I am sure they are convinced that if we followed their advice, the world would be a more equitable place and a wider range of people, including those who currently think they are bad at the subject, would be engaged in mathematics for work or pleasure. This perhaps explains their missionary zeal.

But I just wonder whether they have thought it all through. Properly. The road to a mathematically impoverished future may be tessellated with good intentions.

Greg Ashman teaches physics and mathematics at an independent school in Ballarat, Australia and is the author of The Power of Explicit Teaching and Direct Instruction. He blogs at Filling the Pail, from which this post is adapted.