The history of K–12 education is full of what, at the time, felt like unprecedented shocks to the system that forced schools to adapt in dramatic ways.

For instance, this is not the first time a virus has closed schools’ doors. In 1937, an outbreak of polio in Chicago prompted the creation of “Air Newspaper-School,” which had educators teach students at home via radio waves and local print media. The school superintendent called the innovation “promising” and noted that researchers were studying it.

Twenty years later, a different shock hit. On the same day Leave it to Beaver premiered on television, the launch of the Soviet satellite Sputnik crystallized growing Cold War anxiety into a major national investment into science and math education. The National Defense Education Act of 1958 included more than a billion dollars for education and scholarships and set a new precedent for the role of the federal government in education.

But “promising” potential aside, Air Newspaper-School snapped right back to normal once the polio outbreak faded in Chicago, whereas we can still spot the impacts of Sputnik in schools around the country—from science labs to Advanced Placement courses. In fact, AP is one of the relatively few educational reforms that historians argue actually succeeded.

Neither of these two stories is a perfect analogy for the circumstances school system leaders face today (and few today would laud radio school as an improvement of any kind). Nevertheless, like Chicago’s superintendent, many education leaders are eager not just to survive this year, but to seize the opportunity for promising, positive changes in schools. The sense that a crisis inevitably breeds opportunity seems ingrained. Yet history has proven time and again that innovations implemented in response to sudden changes in circumstances aren’t guaranteed to last into tomorrow.

The good news is this: There is a seed of opportunity for positive change in 2020, and it can grow—if carefully tended. Lasting transformation comes from deep inside schools, not just the world around them. To nurture innovation that persists, school system leaders and policymakers need tools to understand how changes made in response to the pandemic will interact with the “organizational models” they already have.

Luckily, schools’ models aren’t total mysticism. Every school can be described in terms of four components: Schools offer value propositions representing the promises they make to a wide range of stakeholders. They rely on resourcesand processes to carry out their work. And every school has a revenue formula that defines how it covers its costs. These four components determine its capabilities (what it can and can’t do), as well as its priorities (what it must accomplish). 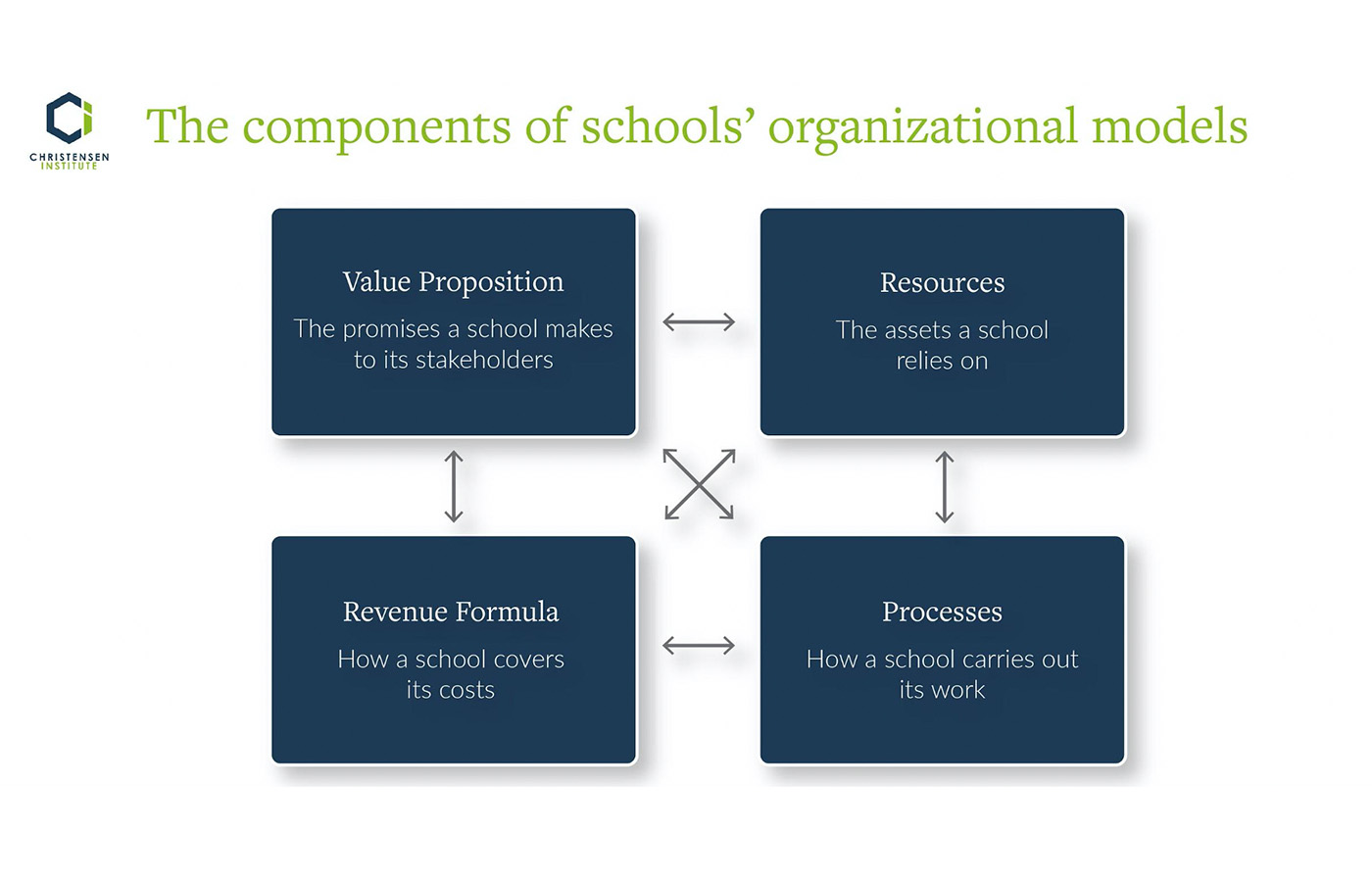 These four components act on each other and respond to the world around them like predictable chemical reactions. Here are three of them:

1. New resources alone aren’t likely to change what schools can do—but resources that power new processes could. For example, in 2015, the OECD’s gloomy findings about the impact of computers in schools could have been predicted: adding a new resource (computers) to classrooms will do very little to change what schools can accomplish unless the new resource enables new instructional processes designed with a specific goal in mind.

In contrast, a different study showed that pairing an adaptive online math homework tool (ASSISTments) with professional learning on formative assessment can increase student achievement in math. Computers and edtech made waves only when enabling teachers to use homework as fuel to power their instructional decisions, not just as stand-alone math practice.

2. To take root and thrive in the long term, new processes have to show they’re better than old ones at meeting schools’ existing priorities. Priorities emerge from a school’s entire organizational model, including its obligation to deliver a value proposition for key stakeholders. Education historians have observed that many a reform has failed to materialize because it simply hasn’t been met by real demand.

On the other hand, the decade of work on competency-based systems at Lindsay Unified School District shows how, in a district that was failing along all the traditional academic measures, new processes took root more easily because the old ones were clearly underperforming. And more important than the fact that Lindsay’s processes are “objectively” improving test scores is that they were also better at meeting the expectations of key stakeholders like teachers, families, and administrators.

3. New priorities are a catalyst for the development of new processes. For example, the launch of Sputnik created urgency around a new value proposition: a generation of competent American scientists and mathematicians to compete with the Soviet Union. The new demand, and new revenue sources through national legislation, prompted a variety of adjustments in resources and processes, like science curricula and AP programs.

Today, there are hints of new demands on schools, such as to ensure all families have home access to the internet, as well as new financial incentives, such as experiments with performance-based funding models that offer weighted funding upfront for schools serving students farthest from opportunity. Formalized changes to schools’ priorities, like these, could strongly influence changes in resources and processes.

But if there’s one warning that our research demonstrates strongly, it’s that the longer an organization has to mature, the more it resists change. Most public schools’ models are deeply entrenched, often persisting with the same fundamental DNA through dozens of leadership changes. Case in point: in the wake of Sputnik, many of the new resources and processes that took root have persisted today precisely because they are synergistic with what Larry Cuban calls the “grammar of schooling,” like age-graded classrooms and A through F letter grades.

That reality is what prompted our work on a new report that digs into what school system leaders and policymakers must know when attempting to nurture long-lasting changes during Covid-19. When equipped with a sense of the dynamics at play in the four-box framework, school system leaders and policymakers can avoid some of the pitfalls of introducing changes to entrenched organizational models. They can also better spot opportunities to introduce promising changes that actually have a chance of sticking around.

School system leaders can begin by distinguishing between the adaptations they introduced as Covid crisis response measures, and those they hope will grow into persistent, positive changes. For instance, some leaders may be eager to rethink attendance policies during remote learning because new policies can prioritize engagement and learning rather than a simple “butts in seats” measure. In this case, leaders should make it clear from the get-go that the new policies are intended to last beyond the pandemic and connect the new policies to the value propositions that they know stakeholders care about. Then, they can get to work improving the new attendance system so that it stands a chance of winning out against the old system when the pandemic ends and the competition between old and new processes begins.

The buck doesn’t stop at K-12 administration. Leaders who influence policy and funding play a critical role in determining the likelihood of lasting change in public schools, especially when it comes to influencing schools’ priorities and processes. Policymakers and funders can nurture change by making funding available for schools to develop new processes (not just shore up resources, which is also critical in an era of serious budget shortfalls). The Department of Education’s grant program, Education Stabilization Fund-Rethink K12 Education Models, is offering this opportunity for some states. Policymakers can also accelerate the creation of innovation zones, exemptions, and waivers to allow schools to let go of legacy processes that hold back promising new ones. Lastly, policymakers can introduce legislation that incentivizes schools to consider new priorities in their decision-making—while also being mindful that schools’ rational reaction will be to deliver on new priorities using their existing capabilities.

Without an understanding of the dynamics at play when schools achieve lasting change, any promising changes introduced this year risk fading away just as quickly as Air Newspaper-School. By taking strategic action, school system leaders, policymakers, and funders can increase the likelihood that school system leaders’ efforts at transformation during the 2020-21 school year bear fruit.

Chelsea Waite is a research fellow for education at the Clayton Christensen Institute, where she analyzes how innovation theory can inform the evolution of student-centered learning and the advancement of student agency. As part of this work, she leads the Canopy project, a collaborative effort to build better collective knowledge about school innovation.