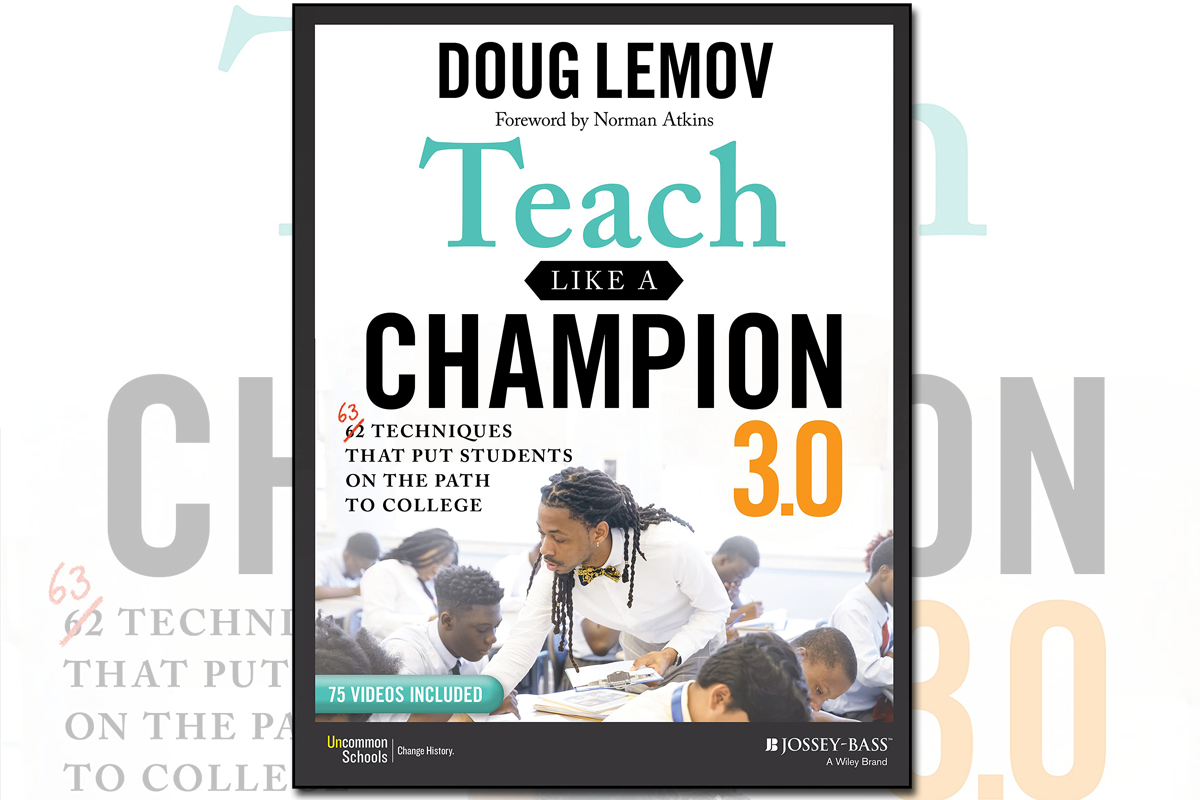 Rick Hess: Where did Teach Like a Champion come from?

Doug Lemov: It came from appreciation for teachers, from a strong belief that the profession is full of unacknowledged masters of a craft—“champions”—whose work contains solutions to the very real and complex challenges of a very difficult job. But also from the realization that we fail to recognize those teachers and value what they do. Meanwhile, people leave teaching because they often feel like they’re not succeeding. It’s one thing to struggle all day and feel like you are making a difference; it’s another to struggle and go home wondering if it helped at all. The profession has to do better by the people who take the job. The short videos Teach Like a Champion includes of our colleagues at their very best not only helps express how much we value them, but it helps other teachers succeed.

Hess: How has the world of education changed in the decade since Teach Like a Champion first came out?

Lemov: Well, there are some good ways that it’s changed. The number of schools that offer radically better classroom learning environments—orderly, productive, happy, challenging, scholarly—has increased significantly in a lot of communities. That gives us more models to study and more evidence that exceptional classrooms are possible. And, therefore, the argument has become, “How do we make excellence the norm?” rather than, “Is excellence possible in all classrooms?” I also think science is beginning to win the day. More people recognize that access to classrooms informed by what cognitive science tells us is an equity issue. That’s a huge win. But there are also greater challenges. Obviously, there’s been a massive disruption to learning due to pandemic. But there’s also a massive disruption caused by epidemic: the proliferation of technology, especially smartphones and social media. This affects students both directly—by degrading their attentional skills, for example—and indirectly—by crowding books out of students’ lives. And I think the social changes in this country have had mixed effects. There’s a greater awareness of equity issues, and that’s important, but specious arguments get carried along on the tide of social justice as easily as substantive ones. People argue that academic achievement is somehow the domain of one group of people but not others. Or that equity involves lessening standards.

Hess: How is Teach Like a Champion 3.0 different from what came before?

Lemov: I think the biggest single change has to be far more intentionality about mapping the overlap between cognitive and social sciences and what teachers do. That shows up in several ways. The first chapter is about the principles that comprise a strong mental model of how students learn. If you have a clear model of how learning works, then it’s easier to make optimal decisions. The second chapter is about lesson preparation, because preparation is different from planning, and it’s critical to the success of a lesson. And then there are a series of new techniques, a lot of them based on how to bring more background knowledge into the classroom and how to better build long-term memory—two key ideas from the chapter on mental models. I’ve also added a new kind of video called keystones. They are 10-minute clips—much longer than the other clips in the book—and they show the broader culture and tone of great classrooms and how teachers combine and adapt specific techniques. The idea is that a video of any one thing inherently distorts the classroom, so I thought these longer videos would help teachers see the big picture a bit better.

Hess: Some critics have suggested that the kinds of directive practices for which Teach Like a Champion is famous are problematic, arguing that they stymie students or create patriarchal learning environments. I’m curious what you make of such concerns.

Lemov: I tried to write about this directly using the story of an imaginary student, Asha. She’s sitting in class and has an idea but is a bit hesitant to share it. Her idea could be wrong, or, just as bad, already obvious to everyone else. Maybe saying something earnest about DNA recombination makes you that kid—the one who raises her hand too often, who tries too hard, who breaks the social code. But somehow in this moment, the desire to voice her thought overcomes her anxiety. I ask my readers to think about what happens next: Will her classmates seem like they care about her idea? Will she read interest in their faces? Or will they be slouched in their chairs and turned away, their body language expressing their indifference? Those factors will influence the relationship she perceives between herself and school. Yes, it matters whether her teacher responds with encouragement—but probably not as much as how Asha’s peers respond. The teacher’s capacity to shape norms in Asha’s classroom matters at least as much as her ability to connect individually with Asha. To create the highest-quality learning environments for young people, teachers have to actively shape the learning environment and sometimes the social fabric of daily interaction. Yes, that requires teachers to ask students to do what may at first seem unnatural. But the benefits massively outweigh the costs.

Hess: OK, but what about those who say that Teach Like a Champion’s approach puts too much emphasis on particular student behaviors?

Lemov: Tom Bennett has this beautiful line in Running the Room. He’s writing about how school should transmit the values of self-discipline, self-regulation, hard work, and patience. “Everything of value you can conceive of was acquired through these things—through sustained effort, practice, and delayed gratification.” To love young people is to give them classrooms that build these habits. You want to speak but you learn to listen first; you are tired some days but complete your tasks regardless. And in the end, those are the steppingstones of greatness. But in lieu of that, we’ve somehow accepted a Hollywood vision where success flicks on like a switch on a journey of self-discovery. I’m going to do everything I can to build schools that offer something better.

Hess: Teach Like A Champion has been translated into something like 15 languages. What’s struck you about the reception overseas?

Lemov: The international work is so powerful and so humbling. I’ve been to the Middle East three times now. The first time, in Jordan, I was invited by Queen Rania’s Teacher Academy. I was doing this workshop for teachers when the queen walked in and sat down at a table while I was showing a video. She raised her hand—needless to say I called on her—and she gave this beautiful analysis of how the teacher had made the cold call feel caring and why it was so important for children in Jordan to get both: the caring and the loving accountability. But working abroad, my first thought is always to acknowledge the differences. I talk sometimes to teachers who have 60-plus kids in their classrooms and are refugees from the Syrian conflict. In some cases, there are kids who are 10 and 12 and have never been to school. … So I start by saying: I understand and respect that everything is not the same. But what surprised me was how quickly teachers said: No, no, this applies. Your kids do what our kids do. When it comes to the core dynamic of the classroom, so much of it is the same.

Hess: If you had to leave teachers with just one piece of pedagogical wisdom, what would it be?

Lemov: Low tech, high text. Phones away, books out. Attention is the driver of learning. You wire or rewire your brain through how you use it. The ability to sustain your focus, to key in to the signal and ignore the noise is built by habit. Every time phones are out, you are practicing fracturing your or your students’ attention, making half-attention the normal state. Read and read and read. In hard copy only. Write and write and write. Pencil to paper.

Hess: And, for school or system leaders, what one thing can they do that would matter most for the quality of teaching?

Lemov: Curriculum has been the most overlooked factor in the struggle for higher achievement. High-quality, knowledge-rich curriculum is key. It has to be carefully designed and include rich but adaptable daily lesson plans. And it has to understand what the cognitive science tells us: Facts and higher-order thinking are not opposites. You can only think deeply about that which you know a great deal about. Knowledge is deeply important and too often scorned by educators.