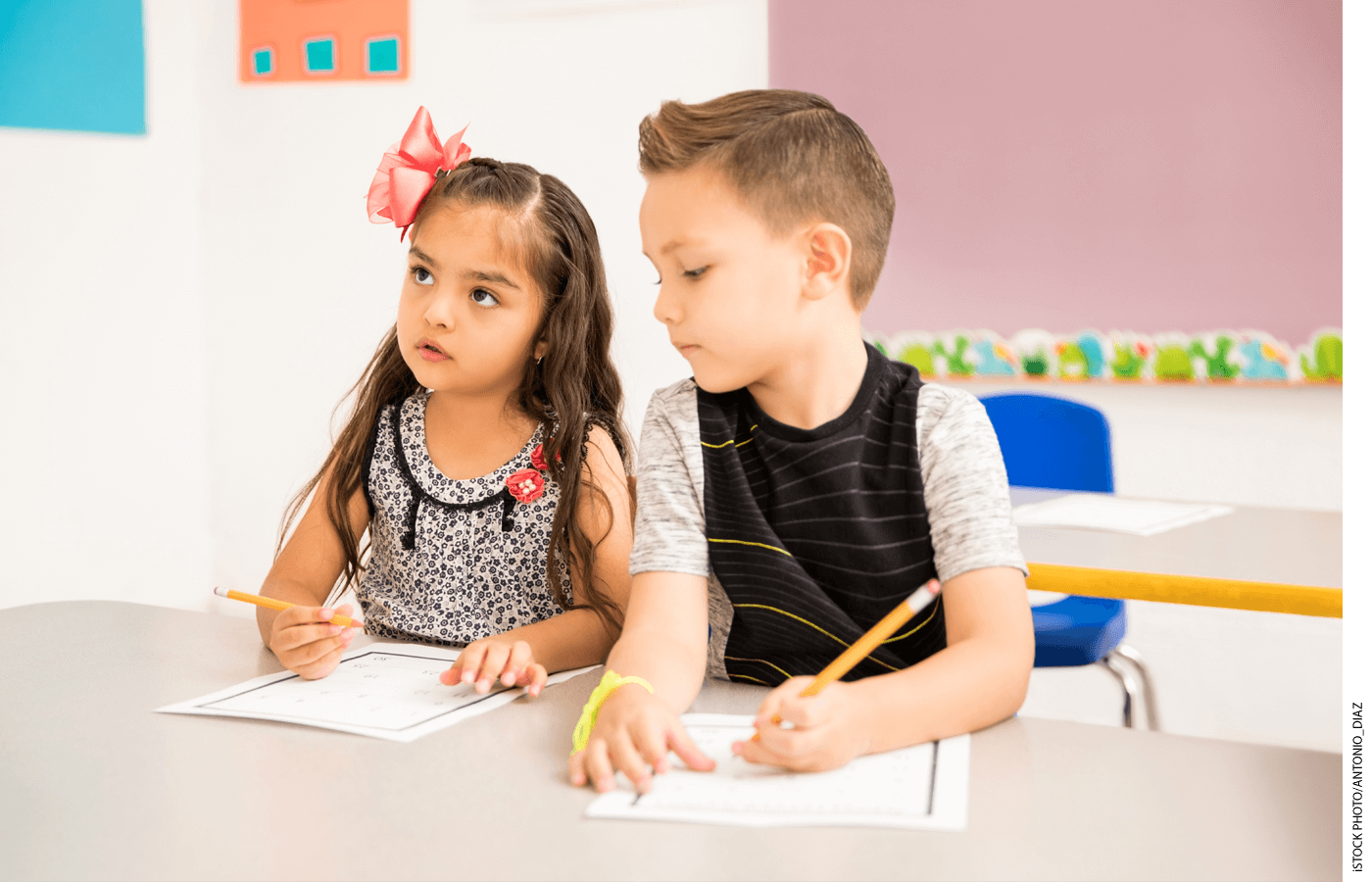 It’s often said that “college readiness begins in kindergarten,” which is generally meant as a call to arms for K–12 schools to help their students set their expectations high right from the start, and to make sure they get the excellent teaching that would allow them to reach this lofty goal.

But when I say that the college gender gap begins in kindergarten, I mean it literally. Not fourth grade. Not eighth grade. Certainly not twelfth grade. Kindergarten! And that has implications for what’s causing the gender gap and what might be done to address it.

A recent Wall Street Journal article about the latest college enrollment trends set off a pundit-palooza on the topic of the female advantage in higher education. “At the close of the 2020–21 academic year,” the Journal reported, “women made up 59.5 percent of college students, an all-time high, and men 40.5 percent, according to enrollment data from the National Student Clearinghouse.” Furthermore, “in the next few years, two women will earn a college degree for every man, if the trend continues.”

The Journal article, as well as several of its imitators, imply that this is yet more evidence of young men “giving up on college.”

And while that may be the case for certain guys out there, it doesn’t capture what’s really going on. In the aggregate, at least, virtually all American students who are academically well-prepared for college continue to matriculate into college and then go on to graduate. It’s just that many more of these students are young women instead of young men. In other words, the college readiness gap is perfectly predictive of the college completion gap.

Let’s take a close look at the most recent data we have on college degree attainment. In 2020, 35 percent of all American men ages twenty-five to twenty-nine had earned at least a four-year degree, versus 44 percent for women. If you assume a 50/50 gender split for the cohort writ large, and do the math, that means approximately 56 percent of college completers in their late twenties are female.

Now roll back the tape. This cohort of students would have graduated from high school from about 2009 through 2013. For the high school graduating class of 2013, the National Assessment of Educational Progress (NAEP) tells us that 33 percent of male students scored at the proficient level in reading, versus 42 percent of females. According to NAEP analyses, scoring proficient in reading is a very good predictor of college preparedness—meaning that, by this one measure, 33 percent of males and 42 percent of females were college-ready at the end of high school. Work the numbers and that means that approximately 56 percent of college-ready students were female.

This holds when we break down the data by race, too.

Figure 1. The percentage of college-ready and college-degree-earning students who are female 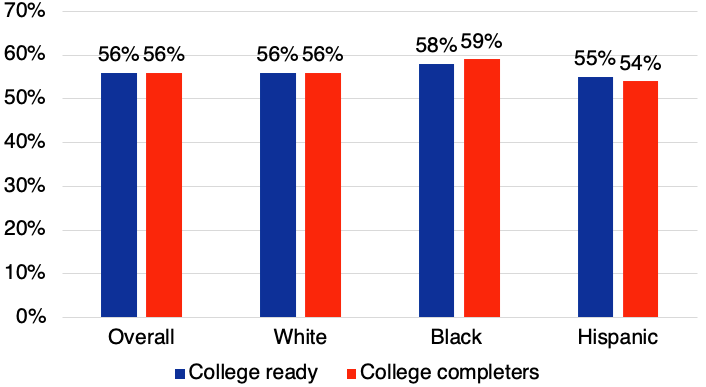 Note: “College ready” is defined as proficient on the grade 12 NAEP reading exam. College completion data are from 2020 and come from the U.S. Department of Education’s Digest of Education Statistics.

To be sure, reading isn’t everything when it comes to college readiness. Non-cognitive skills matter, too, and even within the academic domain, math is also extremely important, not to mention writing or other subjects like history and science. Sadly, though, we don’t have reliable, national college-readiness data for anything but reading. A National Assessment Governing Board analysis did identify a score on the twelfth grade NAEP math test that is predictive of college readiness, and on the 2019 exam, 37 percent of students overall reached this level—the same as in reading. But unfortunately, subgroup data have never been released to the public on this measure, including by gender. (Unlike in reading, where NAGB determined that NAEP proficient equates to “college prepared,” in math, the college-prepared number falls in between NAEP basic and NAEP proficient.) Given that young men show a slight advantage in math on NAEP—in average scores and at the 75th and 90th percentiles—it’s quite likely that they have a slight advantage in college readiness in math, too.

Still, if we had to pick one subject to define college-readiness, reading would be an excellent choice. As E.D. Hirsch has long argued, analyses of the AFQT exam used in the armed forces have long shown reading scores to be twice as predictive of positive long-term outcomes as math scores. It’s hard to do college-level work without being able to do college-level reading. And more young women than young men are reaching college-ready reading levels by the end of high school.

When does the gender literacy gap begin?

So maybe this gender gap opens up in high school? Nope. When the class of 2013 was in eighth grade, 57 percent of students who scored at NAEP proficient in reading were female. High schools may not be doing much to close the gender gap, but they don’t appear to be creating them.

So is middle school the problem? Well, go back to when the class of 2013 was in fourth grade, and we find that the 54 percent of students who scored at NAEP proficient in reading were female. That’s a bit closer to parity—but we can still say that about two-thirds of the college gender gap was already apparent by the end of the fourth grade.

Figure 2. The gender gap among NAEP proficient readers over time for high school class of 2013

Alas, our NAEP way-back machine doesn’t travel any further than the fourth grade. But we can look to another federal data source, the Early Childhood Longitudinal Study (ECLS). This ambitious data collection program followed two waves of students, one group that started kindergarten in 1998 and graduated high school in 2011, and another that started school in 2010 and will graduate high school in 2023. The kids in the study took tests every year from grades K–5, and their parents and teachers filled out extensive surveys as well. We know a lot about these students.

And one thing we know—from analyses by Laura LoGerfo, Austin Nichols, and Duncan Chaplin (for the first wave) and Emma Garcia (for the second)—is that the gender gap in literacy at kindergarten entry is quite small. In the first wave, it was calculated to be less than one point. But girls made significantly more progress in kindergarten and first grade, and somewhat more progress in second and third grades, so that by the end of third grade, they were four points ahead.

Figure 3. Differences in reading learning rates over time by gender for students who were kindergartener in 1998 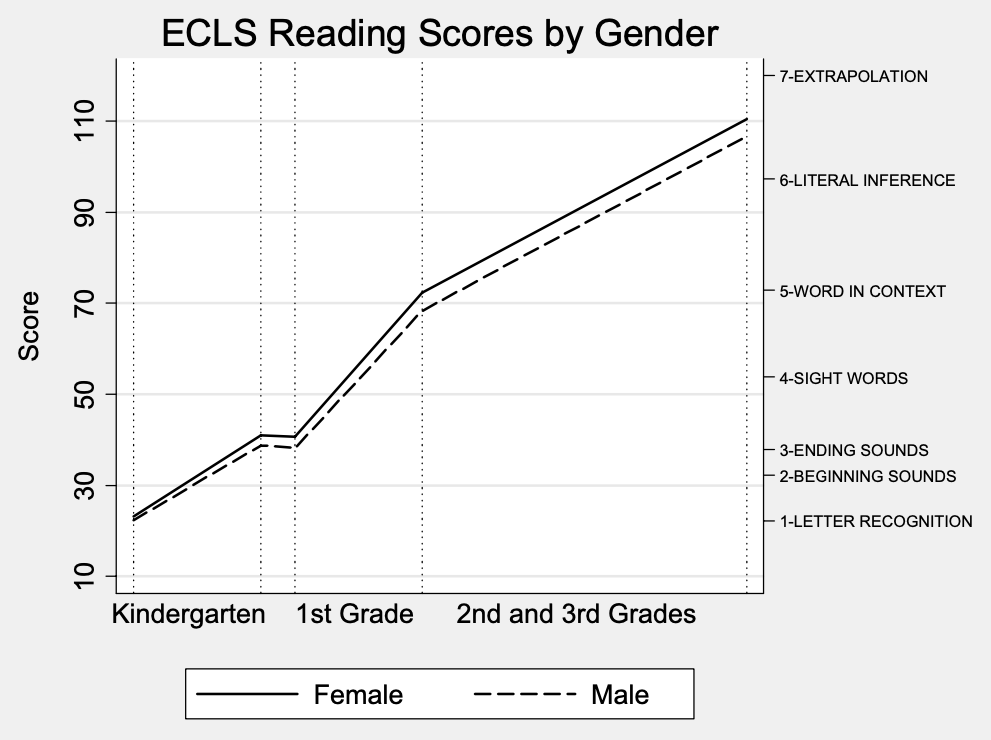 The boys later made up some ground (in line with those somewhat-better fourth-grade NAEP scores), before falling behind again in early adolescence. But regardless of the zigging and zagging, it’s clear that boys are playing catch-up the whole time, especially after making so little progress in kindergarten and first grade.

So why might girls be zooming ahead in the first few years of school? In an excellent article that also points to elementary schools as the birthplace of the gender gap, Richard Whitmire suggests that the reforms of recent decades have pushed literacy instruction earlier, and boys, with their slower-developing brains, can’t keep up. Maybe.

But let’s return to those ECLS studies. Remember that we have both test scores and teacher surveys for every child in the study, meaning that scholars can compare students’ literacy abilities as judged by the tests with teachers’ perceptions of each child’s skills. That’s exactly what Joseph Paul Robinson and Sarah Theule Lubienski did in an a great, oft-overlooked study. And guess what. Teachers systematically underestimated little boys’ reading abilities—both at kindergarten entry and as they made their way through elementary school. Previous studies indicate that this might be because of the “good girls” theory: Teachers think little girls are better readers because they tend to behave better, and think squirrely little boys are poor readers, even when they aren’t. Furthermore, teachers tended to believe that their best readers were disproportionately girls, even when the literacy assessments themselves did not show that to be the case.

As the authors explain, that perception gap could have serious real-world repercussions for boys, as they are placed in lower reading groups than they qualify for, and are handed less challenging books than they can handle.

Indeed, we know from a growing literature that teacher expectations can have a big impact on student outcomes—and that when expectations vary by race, it can contribute to the racial achievement gap. So it is with gender.

So what might we do? As Whitmire says, in part we need to keep working to ensure that all teachers understand and are ready to use the “science of reading” in the early grades. But we should also make sure they are aware of any anti-little-boy biases they might harbor. Using formative assessments like NWEA’s MAP or Curriculum Associates’s i-Ready can help, as they provide hard data about kids’ current reading abilities, which might contradict teachers’ own perceptions, perhaps in a good way. Those data might encourage teachers to place more boys in the higher reading groups—and encourage them to assign them tougher books, too.

It surely would also help if more early-elementary teachers were male. It would be hard to do worse on this particular gender gap, as a whopping 89 percent of elementary school teachers are female. A famous study by Tom Dee found that eighth grade boys benefitted greatly from being assigned to male teachers. That would likely be the case for younger boys, as well.

None of this is to say that we shouldn’t also worry about larger social issues that might be leading to bad outcomes for boys and men. Growing up in a single parent family, in particular, appears to have hugely detrimental impacts for boys.

But as Whitmire argues, there’s not much our schools can do about that problem, and it’s not super clear that other institutions in our society can do much, either. Helping boys get off to a good start in school, however, especially by helping them become stronger readers, is squarely within our control. And there’s good reason to believe that if we keep the reading gender gap from opening up in grades K–3, we could eventually close the college gender gap, as well.

This post originally appeared on the Fordham’s Flypaper blog.