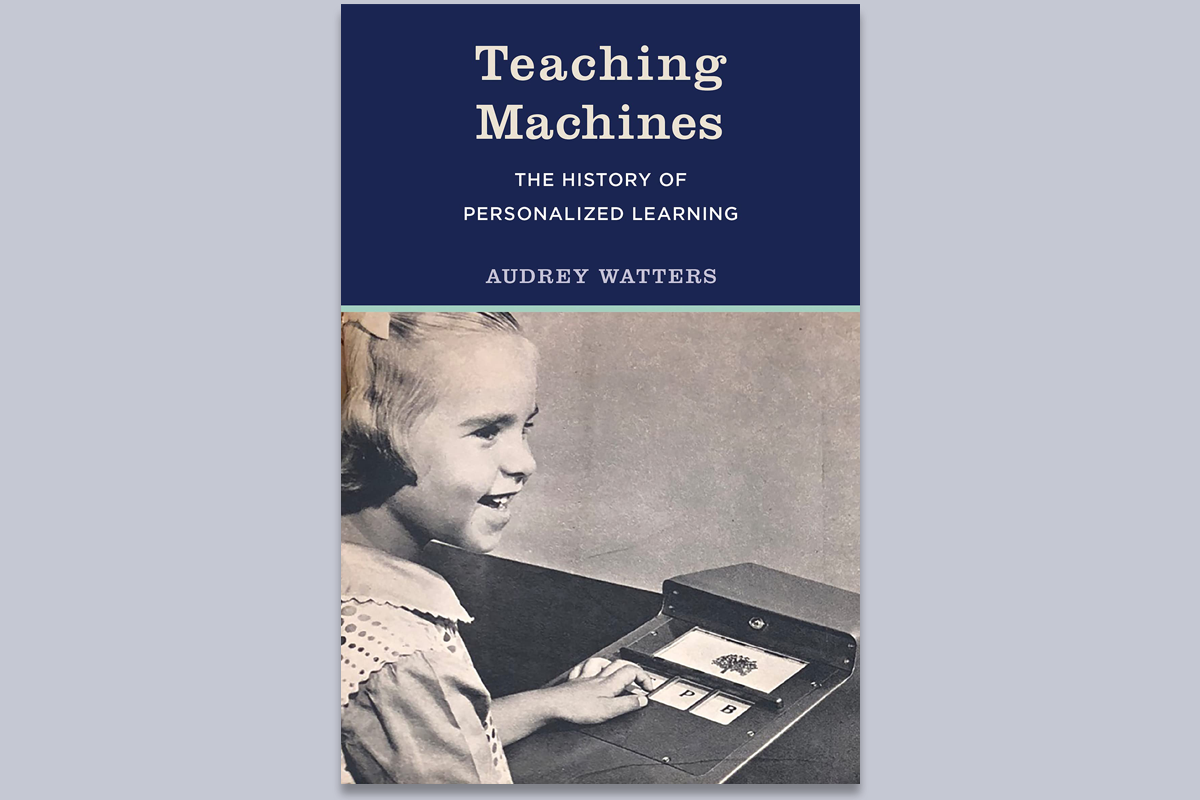 As reviewed by Michael B. Horn

For nearly a decade, Audrey Watters has cast herself as a snarky and skeptical writer about education technology. From theories of personalized learning to new education-technology companies, Watters attempts to cut down the hype and to dash hopes.

In her writings, she frequently covers the history of education, and argues that many of the ideas behind education technology and innovation are neither new nor good.

Her new book, Teaching Machines: The History of Personalized Learning, rests on these two pillars. The book presents two compelling microhistories of teaching machines sandwiched between a preface and a conclusion that attempt unsuccessfully to use those histories to contextualize—and cast doubt upon—personalized learning and today’s efforts to deploy new technology in that effort. Her big objection to personalized learning and education technology is that the two inevitably entail a crude behaviorist approach to instruction that deprives students and teachers of freedom.

Although the teaching machine is most associated with Harvard psychology professor B. F. Skinner, Watters takes the reader back to the era of President Calvin Coolidge and Ohio State Professor Sidney Pressey’s efforts to build and commercialize an “Automatic Teacher”—a machine that would allow students to answer questions, receive feedback, and, at the switch of a lever, progress only after they correctly answered the question.

Pressey’s background was in the field of standardized intelligence testing, which had become popular at the time. Although he knew much about standardized tests and textbooks, “the manufacturing of a piece of scientific equipment was something quite different,” Watters writes.

Watters presents a lengthy description of Pressey’s foibles and frustrations in commercializing his invention. It’s a history that foreshadows Skinner’s experience, and Watters makes sure the reader doesn’t miss the echoes by pointing out that would-be innovators such as Skinner ignored the past and seemed to believe that, in Watters’s words, “Surely this time, things would be different.”

Indeed, Skinner’s dramatic and futile efforts to commercialize a teaching machine weren’t much different from Pressey’s. Watters captures everything from Skinner’s behaviorist philosophy to his tone-deaf dealings with former Harvard President James Bryant Conant, as he tries to convince Conant that his teaching machine will fix American education in the wake of Sputnik. Readers also learn of Skinner’s emotional and highly erratic dealings with the Rheem Manufacturing Company, with which he had signed an agreement to produce his machine.

At times the narrative delves too deeply, in my estimation, into the minutiae and details of primary sources. Yet overall, Watters uses these sources well, and her sharp writing propels the story forward.

What Watters paints ultimately is less a story of Skinner’s device failing in the commercial marketplace for educational reasons and more a tale of flawed business models and missteps in production.

This distinction is at the root of the book’s problems, which start with its subtitle, “The History of Personalized Learning.” A book that fully covered this topic would focus not just on the history of the teaching machine—something more education innovators would do well to understand—but also on many other personalized techniques and approaches, from tutoring to Montessori education. Watters does helpfully explain why she doesn’t tackle computer-based and online education and keeps her primary focus on the era of teaching machines, but equating the movement to personalize learning with machine technology is reductionist.

The history that Watters presents is solid, but her commentary around it is at times flawed. For instance, she misunderstands why many people call traditional schools the “factory model” of education. Yes, many of the features of American education that critics often compare to factories were in fact imported from the Prussian education system. However, as David Tyack and Larry Cuban demonstrate in their timeless volume Tinkering Toward Utopia, the push to incorporate standardized testing into American schools and the use of Frederick Winslow Taylor’s principles of scientific management there were clearly inspired by America’s factories, which themselves were seen as the latest in technology. Watters acknowledges this movement but still castigates those who would call them factory-model schools.

What’s more, her extensive discussion of behaviorism could use more grounding, as her analogies break down in several places. One of her critiques of behaviorism is that it doesn’t work well. Yet she writes about how these techniques are used at Google to create personalization for individuals. It’s hard to argue that Google hasn’t been successful in this pursuit. So if personalization works in the realm of the consumer internet, as at Google, and if that success is based at least in part on behaviorism, then this would suggest that behaviorism works—which is at odds with part of the story Watters tries to tell.

She would still argue that this sort of personalization based on behaviorism is bad because it limits freedom, but research on creativity suggests that in order to be creative, one must first build knowledge and understand the rules of a domain before one can begin usefully breaking rules—particularly in adjacent or orthogonal fields. That would suggest, then, that behaviorism, while not a complete education theory, would serve certain learning purposes such as building knowledge. This, in turn, would allow for the use of skills like critical thinking and creativity.

With that said, there are significant reasons to doubt the direct transferability of behaviorism to education from the consumer internet world—which renders some of Watters’s analogies less useful. Nudges, for example, have a mixed track record in education (see “Nudging and Shoving Students Toward Success,” features, Spring 2021). Civitas Learning, a student-success company based on predictive analytics that Watters references, has largely failed, because its algorithm struggled to be useful as it scaled. At least one challenge with using artificial intelligence in education is that any mistakes an algorithm makes can derail a student’s learning and self-efficacy, whereas on the consumer internet a mistaken recommendation from Amazon or Netflix has little downside, at least for an individual customer. But these aren’t the challenges that Watters raises. Indeed, her dislike of behaviorism because of its limits on freedom leads her to recast Seymour Papert, known as a pioneer of constructionist learning, as a behaviorist.

This suggests that Watters is primarily just ranting against the use of any and all digital education technology. That sort of protest seems akin to sitting on top of a moving train and yelling stop.

Watters doesn’t get into the topic of how some of the competitors to Skinner’s teaching machine have fared. In fact, some of today’s technologies that she belittles have seen massive adoption. Khan Academy, a foil she writes about in the book, has over 100 million users—in dramatic contrast to Skinner’s experience. Age of Learning, the maker of the popular ABCmouse app and website, serves more than 50 million children. Indeed, the digitization of America’s schooling curriculum is well underway and has likely accelerated since the pandemic. Even longtime education publishers like McGraw-Hill, for example, are majority digital, not print, companies now. Whether they are successfully personalizing learning is a different question.

In her conclusion, Watters writes that the adoption of technology in education has ebbed and flowed over time; it’s “not a short-lived fad but rather a recurring trend.” This portion of the book is, in many ways, a statement of her professional career as a critic protesting technology as a detriment to individuals’ freedom. Watters cites the Freedom Schools that arose from the 1964 civil-rights project Freedom Summer as “a network of alternative education centers that offered the kind of teaching and learning that the public school system of Mississippi had refused to provide its Black population.” She goes on to say, “If we reject teaching machines and technologies of behavioral control in education, we certainly won’t be the first to do so. . . . From the history of refusal, we can see when students and teachers and communities protested attempts to engineer them, into either enlightenment or submission. From the alternatives they imagined and built—most notably, perhaps, the Freedom Schools, we can glean ways to construct and share knowledge that depend on humans rather than machines, liberating us from the efficient control of the ‘Skinner box.’ These practices privilege the much messier forms of teaching and learning, forms that are necessarily grounded in freedom and dignity.”

It is all fascinating history. But contrary to the author’s contention, the historical examples stop well short of demonstrating that today’s innovative practices will impede freedom rather than advancing it.

Michael B. Horn is executive editor of Education Next, co-founder of and distinguished fellow at the Clayton Christensen Institute for Disruptive Innovation, and senior strategist at Guild Education.

This article appeared in the Winter 2022 issue of Education Next. Suggested citation format: