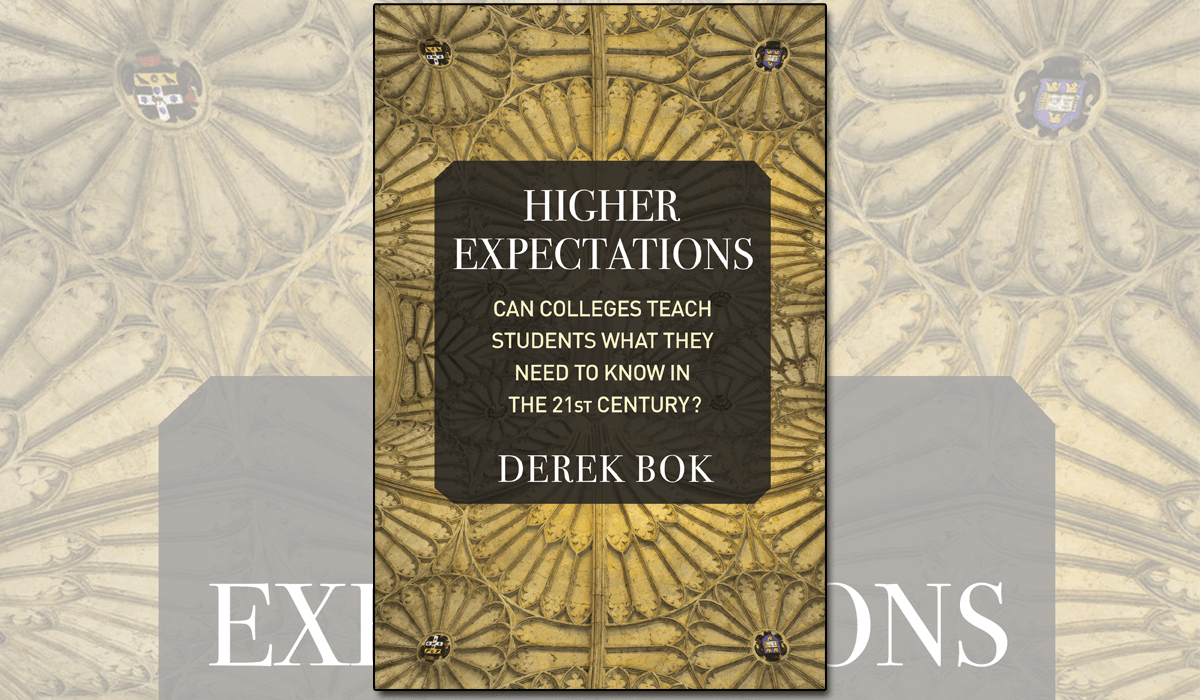 Higher Expectations: Can Colleges Teach Students What They Need to Know in the 21st Century?
By Derek Bok
Princeton University Press, 2020, $29.95; 232 pages.

Wisdom comes from experience, and Derek Bok has a lot of wisdom to share in his new book, Higher Expectations. In his more than 60 years at Harvard University, Bok was a law professor, dean, and then for two decades president of the university, before returning 15 years later for a brief stint as interim president. From his long-term perch in the upper reaches of higher education, he has witnessed dramatic changes in what universities teach as well as how they teach it. Bok played a leading role in trying to shape those changes, with what he acknowledges was mixed success.

Higher Expectations provides a brief history of Americans’ evolving views on higher education and its purposes, including his own part in that history. Bok then pivots to what those purposes should be going forward. He provides a balanced consideration of competing arguments, and ultimately makes the case that universities should focus on educating citizens who have a global perspective, behave ethically, have inner purpose and self-control, and can effectively relate to others. He asks the reader to “imagine an America in which much larger numbers of college graduates” could “collaborate effectively with others,” “meet their commitments conscientiously,” and “interact easily and harmoniously” with people from different backgrounds. “Suppose further,” he continues, “that larger percentages of college graduates voted regularly in elections, participated in cooperative efforts to improve their communities,” and possessed “stronger ethical principles, greater empathy for the problems of others, and a clearer sense of the purpose and values to guide their lives.”

Bok concedes that this agenda is ambitious, but he believes “it is not mere fantasy,” in part because “neuroscientists and psychologists have even found that some of these qualities develop most during the years of early adulthood, when the majority of undergraduates go to college.”

Bok approvingly describes the shift from the classical curricula of early American colleges, with their emphasis on shaping the moral and religious character of students, toward the more scientific and practical curriculum of the 20th century. In the new millennium, however, Bok believes something is missing. He notes increasing student aimlessness, widespread depression and anxiety, a lack of moral purpose and effective civic engagement, and increasing social challenges. The new curricular goals Bok is advocating are meant to address these ills.

In some ways, Bok’s case for a new curriculum brings universities full circle. Like the classical education of early American colleges, Bok’s new vision for higher education stresses the shaping of students’ character and filling the spiritual void many of them seem to experience. The main difference is that Bok’s 21st century curriculum replaces the wisdom of the ancients and of Judaism and Christianity with a secular “religion” built on social science and contemporary political values. Bok does not disparage the ancients or traditional religion, but neither does he draw upon them to make his case. Instead, he relies on the authority of specialists such as neuroscientists and psychologists. The insights of the ancients that have survived for us to study are those that have proven useful and important to scholars and students over the ages. So, it is our collective experience over the millennia that is embodied in what is taught from the ancients. Will the insights of the new cult of social science be as compelling as the three-millennia tradition of classical education?

Bok’s game plan for reforming higher education and his description of past changes betray his perspective as a leader in that effort. In his view, major shifts in higher education curriculum have historically sprung from a series of blue-ribbon commissions that have deliberated on the best options, issued reports with their conclusions, and then struggled to corral unruly faculty into adopting these well-considered recommendations. Higher Expectations is primarily a brief for the curriculum changes recommended by the Association of American Colleges and Universities—changes that were produced following the launch of the organization’s Liberal Education and America’s Promise initiative in 2005. Bok seems to think that, if only he can muster the right arguments, backed by the best social science, he can persuade enough faculty to join him in endorsing the Association’s plan to make its adoption widespread.

William Fischel, in his brilliant history of American primary and secondary education, Making the Grade, offers a different theory of how change occurs in education. In Fischel’s account, educational structures, curricula, and pedagogy evolve in response to market demand rather than elite deliberations. As he puts it, “Educational leaders such as Horace Mann headed parades that proceeded on routes selected by the marchers, not the grand marshal.”

This market principle almost certainly applies to higher education as well. America’s early colleges did not abandon a focus on religious and classical education because faculty committees considered the matter, revised their understanding of the purposes of education, and decided to adopt new curricula. Those colleges changed course because student and donor demand pushed them in a new direction. Philanthropists such as John D. Rockefeller, Leland Stanford, and Andrew Carnegie built new universities modeled after German institutions that emphasized scientific research rather than classical education or ministerial training. Students seeking opportunities in the rapidly industrializing economy flocked to those new universities. Ivy League colleges and other institutions built on the traditional model noticed the competition and felt pressure to change. Roughly contemporaneously, the Land-Grant College Act of 1862, also known as the Morrill Act, responded to national demand for new public universities that were required to include training in practical fields such as agriculture, mining, and engineering. The construction of these new public and private universities, and the students who eagerly filled them, probably had a greater effect on changing the purposes of higher education than any blue-ribbon commission or university president.

I completely agree with Bok’s argument that universities should have broader purposes than training people for employment. I share with him a concern that the tide is shifting too far in a vocational direction. But I fear that we are like King Canute ordering the tide not to rise. Our protestations will have no effect. Student demand, facilitated by philanthropic and government subsidies, is continuing to tilt higher education toward job training and industrial research regardless of what we may think those students, donors, and politicians should want. According to the U.S. Department of Education’s Digest of Education Statistics, 68 percent of college students now major in a vocational field, up from 54 percent in 1970. The top four majors today, accounting for about 43 percent of all college students, are business, health, engineering, and communications. This shift may not be as apparent at elite institutions, but even in those colleges and universities, the most popular majors include economics, computer science, business, and engineering. The competitive pressure from vocational programs at state universities is pushing more elite institutions in that direction.

Given the unstoppable tide, perhaps those of us who are still attached to the broader purposes of education will have to make do with shoring up islands in this rising sea. Liberal arts colleges and honors programs in public universities may be our best bets for serving the minority of students who are seeking this type of education and the donors who wish to support it. Going forward, those broader purposes are likely to be as diverse as the varied preferences of those students and donors. Higher Expectations provides a helpful guide for those who hope to fortify and reform this dwindling but essential collection of institutions. Bok’s vision of the purposes of higher education is unlikely to become the official state religion, but it could serve as a beautiful hymnal in dissenting churches.

Jay P. Greene is Distinguished Professor of Education Policy at the University of Arkansas. He was a 1994 recipient of the Distinguished Teaching Award from the Derek Bok Center for Teaching and Learning at Harvard University.

This article appeared in the Winter 2021 issue of Education Next. Suggested citation format: