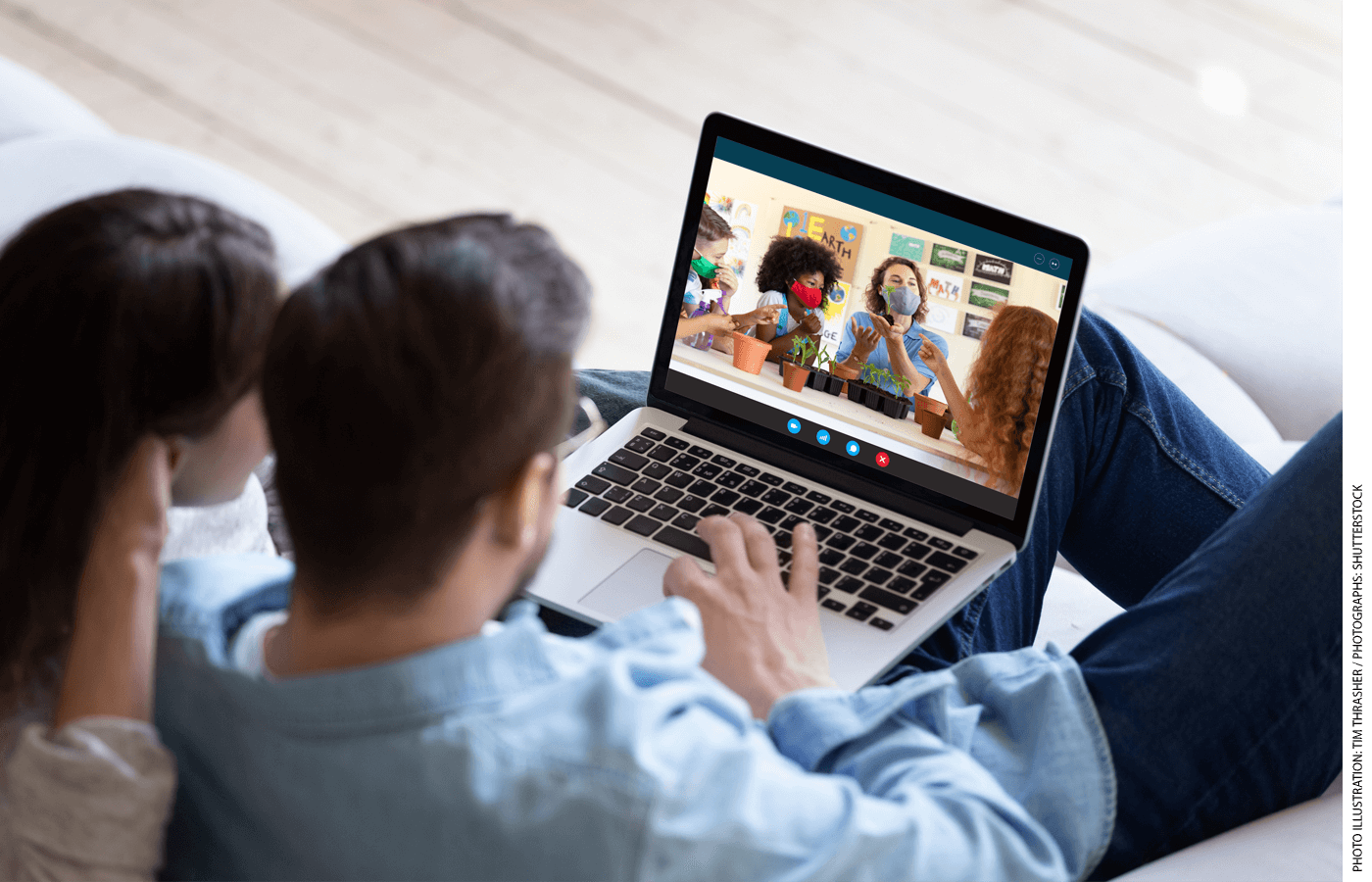 Now that there’s light at the end of this very dark tunnel thanks to vaccines developed in a miraculously short time, we are all looking forward to life getting back to normal. But that doesn’t mean everything should go back to exactly the way it was pre-pandemic. Some of the changes brought on or accelerated by this plague are worth perfecting and making permanent. My own list includes working from home more often, engaging in routine telehealth visits, and, in the world of education, holding parent-teacher conferences by Zoom.

None of that is particularly controversial. But another obvious innovation surely will be: Keeping teachers’ cameras on even when most students return to learning in person.

The upsides are obvious for students and teachers alike. Kids who are sick or snowed in at home can keep up with schoolwork from the couch, and students sentenced to in-school suspension can watch class from down the hall. All students can rewatch recorded lessons when they are struggling with homework or studying for a test. Teachers looking for feedback and support can easily share recorded lessons with administrators, instructional coaches, and peers as a powerful means of professional learning. Artificial intelligence can even provide teachers with evidence of their lessons’ impact in real time, for example by showing which of their questions generated the most student discussion, as the start-up TeachFX is demonstrating. And audio recordings can fuel a new generation of high-quality research on instructional practice by tapping into machine learning (see “Big Data Transforms Education Research,” Winter 2018).

This isn’t a new thought for me. Readers may remember that I’ve argued for “teacher cams” before—in this column 10 years ago at the height of the teacher-evaluation craze (“Lights, Camera, Action! Using video recordings to evaluate teachers,” Spring 2011). Why settle for a couple of pre-scheduled, in-person class observations a year, I wondered, when video cameras make it possible to watch any lesson at any time? That question is even more of a head-scratcher now, given how much cheaper and more ubiquitous cameras have become in recent years. Most desktops, laptops, Chromebooks, and smartphones have built-in video at the ready. Why not use it?

Instructing some students in person while simultaneously teaching the rest of their classmates online, via Zoom or similar platforms, is one of the approaches schools have adopted in order to maintain social distancing during the pandemic. This is far from an ideal situation for teaching and learning, but from a logistical perspective using video just requires flipping open a Chromebook and clicking a few buttons. Some schools, like those served by the charter school management organization Academica, have gone further, investing in cameras that automatically track teachers’ movements as they walk around the classroom, replacing the static “talking head” shot with a more engaging, dynamic delivery.

So why do I anticipate controversy ahead? If only students were allowed to view the livestreams or recordings, there would be little problem. But no doubt some teachers won’t be thrilled to know that their administrators could also be watching them—and evaluating their performance—any time they like. And spines are likely to stiffen further if parents can access the lessons. Already, some school districts have explicitly told parents not to watch their kids’ livestreams when the children are home doing remote learning. In Rutherford County, Tennessee, officials went so far as to require parents to sign forms promising to comply in an effort, they said, to protect student privacy. What they meant, of course, was teacher privacy.

But privacy isn’t the only concern for teachers. Some also worry about scrutiny of what and how they’re teaching. There was a minor dust-up early this school year when Philadelphia teacher Matthew Kay tweeted his concern that, if he and his peers are “engaged in the messy work of destabilizing a kid’s racism or homophobia or transphobia—how much do we want their classmates’ parents piling on?” Transparency itself can be a worry, as the Washington Post reported, if cameras enable parents to observe instruction that is mediocre or worse.

As for the recordings, should they be deleted after a short period of time or kept forever? And what if students, parents, or others post them online? Just as body-cams have brought police violence to light, what if kids use teacher-cams to bring inappropriate teacher behavior to light? That could be a powerful lever for change, such as by keeping teachers from discriminating against Black or Brown students when doling out discipline. But what if such an incident is taken out of context?

Fundamentally, many teachers see livestreams and video recordings as infringements on their professional autonomy. Indeed, the California Teachers Association asserted as much this past summer, when it pointed to a 1976 state law that is said to forbid classroom recordings not authorized by the individual teacher on camera, as state officials moved to require daily live video instruction during pandemic-related closures. In some ways, this is an understandable concern. How would office workers, for example, like it if anyone could watch them do their work (or not) all day long?

But that misses the point. Teachers are professionals, yes, but teaching is a fundamentally public act, especially in public schools. It’s a bit like the role that judges play in criminal trials. Some states allow such trials to be broadcast live, so that judges’ performances are transparent, for the whole world to see. But of course when the judges go into their chambers, the cameras don’t follow. So too with teachers. When they are providing live instruction in the classroom, there should be no expectation of privacy. Other parts of the job, like lesson planning and grading, should remain sacrosanct.

If arguments like these don’t sell reluctant teachers on video, maybe a more fundamental concern will: money. States fund schools based on their attendance rates, measured either daily or a few times a year. If states allow students to be counted as “present” even if they are out sick because they are watching and learning from home, that could mean more money in schools’ coffers.

We can’t entirely predict all of the good and bad of what cameras in the classrooms might bring. But it’s always been just a matter of time until we found out, and thanks to Covid-19, that time has come.

Michael J. Petrilli is president of the Thomas B. Fordham Institute, research fellow at Stanford University’s Hoover Institution, co-editor of How to Educate an American, and executive editor of Education Next.