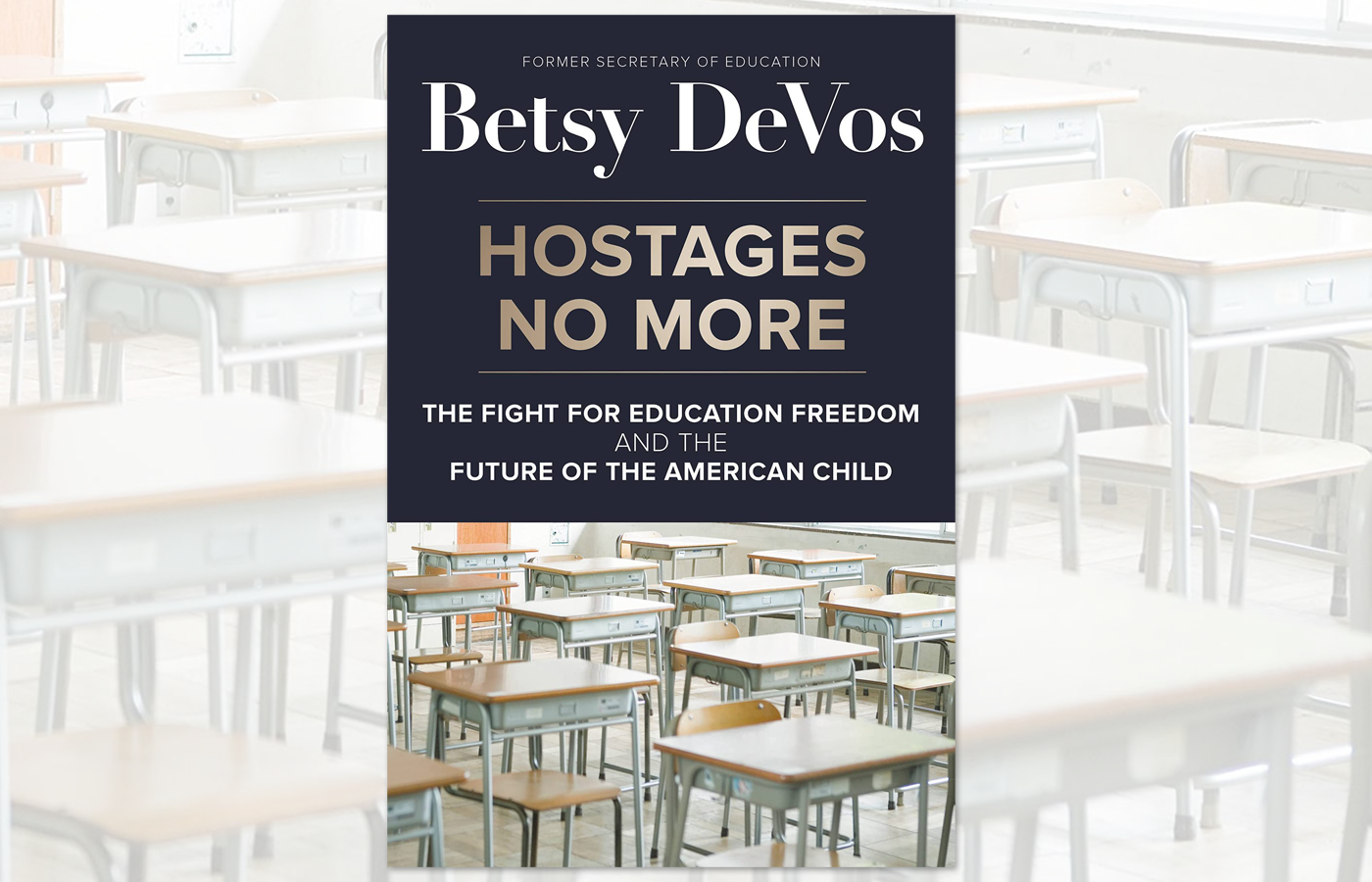 Hostages No More: The Fight for Education Freedom and the Future of the American Child
by Betsy DeVos
Center Street, 2022, $29; 304 pages.

With much the same characters and plot lines as The Brothers Karamazov, though absent its gripping prose, Hostages No More evokes memories of Fyodor Dostoevsky’s masterwork on good and evil. Former Secretary of Education Betsy DeVos admits she does not have “a way with words,” but larger-than-life forces and personalities propel themselves straight through the vanilla writing and overwhelm Horatio Alger-style vignettes about families who chose their schools.

The author plays the part of Alexei, known in the diminutive as Alyosha, the innocent, 20-year-old novice preparing for the monastery. Betsy DeVos, née Elisabeth Prince, the daughter of a prosperous but workaholic entrepreneur, was born into a Dutch Calvinist family in Holland, Michigan, the City of Churches, and, it is said, the social capital of the world. Imbibing family and community traditions, she and her husband, Richard, seem to live by the same principles John Wesley, the English evangelist, expounded: “Earn all you can. Save all you can. Give all you can.” The DeVoses’ philanthropic endeavors concentrate on expanding school choice for those who cannot afford the cost of private schooling themselves. For them, the one sentence that counted in Donald Trump’s acceptance speech at the 2016 Republican convention was the one that committed him to rescuing “kids from failing schools by helping their parents send them to a safe school of their choice.”

After accepting the call to serve in Trump’s cabinet, DeVos found herself working for a modern-day Dmitri, the frenzied, lascivious, self-absorbed oldest Karamazov brother, the one prepared to leap into hell, “heels up,” to recover what he thought was his rightful patrimony. Her connection to the narcissistic president was distant at best. She and Richard had backed Governor Jeb Bush for the Republican nomination, and it was Bush who first approached DeVos with the idea of serving as education secretary. Very likely, Vice President Mike Pence arranged the appointment.

That background provided little claim on the presidential ear. When skirmishes occurred inside the Trump administration, DeVos typically found herself on the losing side. On when and how to revise Obama’s guidelines on the use of boys’ and girls’ toilets, DeVos urged deliberation, but Attorney General Jeff Sessions insisted on an immediate policy reversal. The secretary took her cause to the Oval Office—and lost. Next, she was forced to “hire political loyalists with no qualifications to work at the Department of Education in roles that we did not want or need to fill.” A near breaking point occurred, she writes, when “a woman was killed during white supremacist rioting in Charlottesville, Virginia.” After the president said there were “good people on both sides,” DeVos writes, she “seriously considered whether I could continue serving in the Trump administration.” She nonetheless remained on the job.

DeVos finally succeeded in getting the president to back school choice by inserting a short sentence about the topic, though not a full paragraph, into his State of the Union Address. But when the administration formed a coronavirus task force that included representatives from across the government, “Education was nowhere on the list,” she writes. Toward the end of Trump’s term, DeVos made a last-gasp effort to insert school-choice provisions into a Covid relief bill, but she received no help from a boss now concerned only about his patrimony.

Our modern-day Dmitri nonetheless praised DeVos for replacing Obama’s sexual-harassment guidelines with balanced regulations that protected both the accuser and the accused. The president strongly favored protections for the innocent, he told her; after all, he himself had been falsely accused of such behavior.

No one approached their Senate confirmation with more ingenuousness than Betsy DeVos. Among the first of Trump nominees to testify before a Senate committee, she had to prepare quickly. Or not prepare, as it turned out. We are told that Trump’s young acolytes from the campaign trail seemed to know little about education and even less than about confirmation politics. Nor was DeVos quick enough to ask her own team of advisers for help.

Suddenly, she encountered a force no less resourceful than Ivan, the second of the Karamazov brothers, who personifies cool, calculated, brilliant, atheistic evil. Just as Ivan tells Alyosha the story of the “The Grand Inquisitor” to destroy Alyosha’s faith, so teachers unions drove the questioning and the media optics at the confirmation hearings to kill the nomination of a school-choice advocate. “The notion that the Senate is responsible for confirming the secretary of education is really only true on paper,” DeVos says. “In reality . . . it’s the teacher unions that control the process.”

Unready for a well-designed “gotcha” strategy at the confirmation hearings, DeVos hesitated, stumbled, and repeatedly said that the topic in question was a state and local matter. As negative press mounted, two Republican senators joined all the Democrats in voting against the DeVos nomination, forcing the vice president to cast a tie-breaking vote in her favor. DeVos saves her ire for two of her cross-examiners: the cool, brilliant former Cambridge, Massachusetts, professor, who once favored vouchers, and the enthusiastic former Newark mayor, once a leading force in the charter school movement. Both were fashioning presidential campaigns. Selling out a cause for political ambition is not what DeVos is about.

The union campaign against DeVos marched on as if led by Ivan the Terrible. They opposed her every proposal, criticized her every statement, attacked her personally whenever an occasion allowed. With one exception: early on, DeVos accepted an invitation to visit a public school chosen by Randi Weingarten, president of the American Federation of Teachers. The only stipulation was that Weingarten return the favor by visiting a school picked by the secretary. The first event, in rural Ohio, went pleasantly enough, but the second never happened. For union leaders, sophisticated calculation takes precedence over common courtesy.

As Fall 2020 neared and the risks of Covid to students and teachers receded, unions seemed prepared to help reopen schools for in-person instruction, but the president stupidly tweeted, “The Dems think it would be bad for them politically if U.S. schools open before the November Election. . . May cut off funding if not open.” To which Weingarten replied: “Our teachers were ready to go back as long as it was safe. Then Trump and DeVos played their political bull****.” The author rightly comments: “How did the president’s words change . . . the safety of teachers? . . . It was the political struggle, not children, that mattered most.”

The memoirs also introduce a contemporary equivalent of Alyosha’s illegitimate half-brother, the shrewd, reeking epileptic, Smerdyakov. DeVos met this force when she decided to begin her reign by visiting Jefferson Middle School, a public school in the nation’s capital. “DC officials had leaked word of my visit to the unions,” she tells us. “Dozens of protesters [chanted] . . .  ‘Dump DeVos!’ ‘Go Back,’ and other insults.” The scene repeated itself whenever the secretary spoke at schools and colleges across the country. When she visited Harvard, I witnessed long lines of protesters—students, union lackeys, Cambridge radicals—waiting for a chance to browbeat her. Shouts and screeches rang through the auditorium. The audience waved vulgar, insulting oversize signs and placards. As DeVos received a rising number of death threats, the Secret Service decided she needed the protection of federal marshals.

Hostages No More, like The Brothers K, stops rather than concludes. But both books have a climax. Dmitri is convicted of patricide and receives a 10-year prison sentence, though we know Smerdyakov did the dirty deed. In DeVos’s epilogue, we are told about modern-day Smerdyakovs storming the nation’s capital on January 6, 2021, cheered on by a Dmitri desperate to keep his patrimony. DeVos urges the vice president and her fellow cabinet members to find the president disabled and thus no longer able to perform the duties of his office. A calm vice president advises against the idea, and the secretary resigns her position.

Yet both stories end on an affirmative note. Despite hatred, murder, false convictions, and the best an atheist can offer, Alyosha remains true to his faith and enters the monastery.  Similarly, DeVos holds fast to her integrity and principles. School choice advances farther than any had anticipated before she took office. It is now firmly established as Republican Party doctrine. More state legislatures are enacting choice programs than ever before. Charter school enrollments are continuing to grow. Homeschooling is on the rise. Betsy DeVos could come to be seen as the most successful of all U.S. secretaries of education. The ending to Hostages No More is yet to be written.

Paul E. Peterson, senior editor of Education Next, is the Henry Lee Shattuck Professor of Government and director of the Program on Education Policy and Governance at Harvard University.