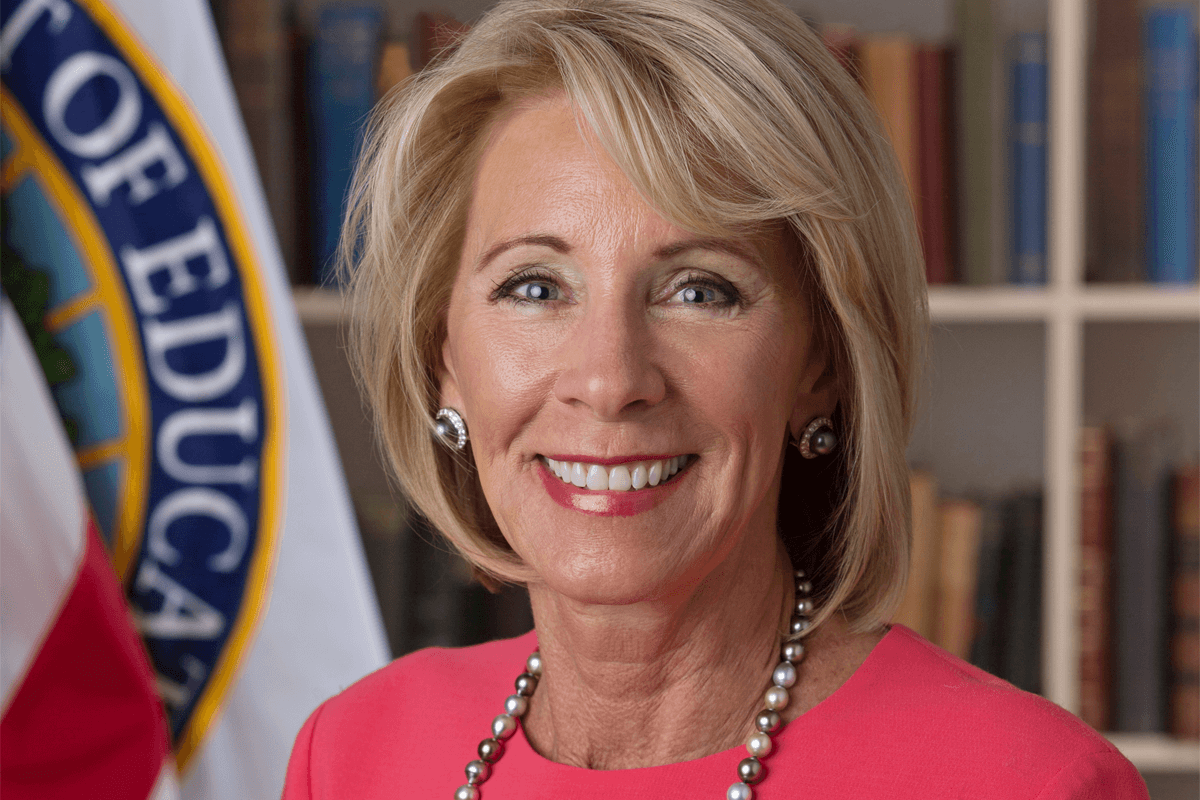 Betsy DeVos’ tenure as the nation’s 11th secretary of education will come to an end in January. As she approaches the end of her tenure, Secretary DeVos agreed to share some thoughts on her experiences, what she learned in office, and what advice she’d offer her successor.—Rick Hess

Hess: Back in 2017, your confirmation process was remarkably contentious. Looking back, what did you take from that and how did it affect your approach to the role?

Secretary DeVos: It confirmed my belief that entrenched interests were going to do their best to protect the status quo, their power, and their jobs no matter what. It gave me a clear-eyed look at the uphill battle I knew we would face as we pivoted the federal focus away from adults’ interests to what’s best for kids.

Hess: You came to your position as an outsider—how has that mattered?

DeVos: Like I’ve said before, I didn’t know all the things you “can’t do.” So I came in with fresh eyes and a laser focus on rethinking the way we approach all aspects of work at the department.

Hess: What surprised you most about the job?

DeVos: A couple of things. First, that the bureaucracy is even more bureaucratic than any of us could have ever imagined, and it takes longer to get anything done than I could have ever imagined. Second, seeing firsthand just how difficult it is for people in Washington to see beyond what is and imagine what could be. Third, and importantly, I am consistently inspired by what parents will do for their kids’ educations. I’ve met single mothers driving Uber in addition to holding two other jobs just so their children can learn in schools that work for them. I’ve met parents who didn’t wait for permission to home school their children nor did they wait for their schools to open this past spring, establishing their own learning pods and microschools so their children could continue learning. I suppose I’m not surprised by the ingenuity of America’s parents, but I am inspired by them and their students.

Hess: For you, what’s one anecdote that really captures what it’s like to be secretary of education?

DeVos: I remember talking with a group of young African American students in a school where they were benefiting from the Milwaukee voucher program and looking outside at a sea of middle-aged white protestors who apparently thought those students didn’t deserve that opportunity. I think that’s a pretty good microcosm of what my experience in office was like.

Hess: What was the most useful preparation you had to be secretary?

DeVos: I’ve dedicated more than 30 years of my life to fighting for students, starting in my community, then throughout Michigan and in states across the country. I know what parents want and need for their children’s educations because I am one and because I’ve fought alongside them to have the same choices and opportunities for their kids that I had for mine. People also forget this is ultimately a management job, not a teaching job. Among other things, you run one of the nation’s largest banks. Having actually led large organizations was very important preparation.

Hess: If you had to point to just one, what’s the single data point that really illuminates your thinking about American education?

DeVos: Half of lower-income 4th graders are below-basic readers, according to the most recent Nation’s Report Card. If the system is failing to teach the most basic of skills to the most vulnerable of students, how can anyone defend it? Worse yet, for the past quarter century, there has been no meaningful change in test scores, yet as taxpayers, we spend more and more for education each year. And by too many measures, these gaps are even widening. Perhaps the largest gap is between American students and their international peers. We’re not in the top 10—in anything. That’s not because our students aren’t capable; it’s because “the system” is culpable for failing them. And, if I could point to a couple more data points, there are currently millions of kids on charter school wait lists, and 3 out of 4 parents who say, if given the opportunity, they would choose a different school than their assigned one for their child. Parents are making clear what they think the solution is to the system’s failures.

Hess: What’s one thing that advocates and reformers should understand about federal education policy which they may not already?

DeVos: It needs your voices. Reformers rightly focus on the states, which are in control of education, but ignoring Washington comes with peril. Remember, a different president and secretary most certainly would have implemented the Every Student Succeeds Act in significantly more controlling ways.

Hess: What would you regard as your most significant accomplishment in office?

DeVos: Hands down, it’s changing the national conversation around what K-12 education can and should be. The concept of school choice is more popular across racial, ethnic, and political lines than ever before. I’m also proud of the team’s work on the historic Title IX rule which codified into law protections for all students.

Hess: And what would you say is your biggest regret?

DeVos: In four years, we set out to change the course set by the past 40 years of the department’s history. Though we’ve made remarkable progress, as long as there are students stuck in schools that do not meet their needs, the work is not yet done. I believe that all children have unlimited potential and promise, and so every single one of them deserves the opportunity to find their educational fit. I regret that we didn’t push harder and earlier in the term.

Hess: Throughout your tenure, your emphasis has been on expanding educational choice for students and families. How would you evaluate your record on this score?

DeVos: My team and I have worked very hard to advance education freedom—or school choice, as most know it. This idea, which President Trump rightly calls “the civil rights issue of our time,” is on the march across the country. Students in more states have more opportunities to pursue the education that’s right for them today than when I first took office. Consider the bold expansions in North Carolina, Florida, West Virginia, Tennessee, and even in Illinois. Right here in D.C., participation in the school choice program is now 50 percent higher than it was four years ago, and there is still massive unmet demand. We’ve changed the conversation at the federal level, too. Our proposal for Education Freedom Scholarships is the most ambitious in the nation’s history, and now there are more than 120 co-sponsors in Congress and more than 50 Senators who voted for Sen. McConnell’s Covid relief package who are helping us champion the idea.

Hess: You’ve been a vocal champion of state and local control. What has struck you about the response to that call?

DeVos: I can’t say I’m surprised, but I am sorely disappointed that there wasn’t more support for state and local control. The very core of the Every Student Succeeds Act was about empowering states and fixing federal overreach. So many teachers just want control of their classrooms—on curriculum, on discipline, on helping students. And educators should remember that control was taken away from them by Washington when the Department of Education was created and even more drastically over the last two decades through programs like NCLB and Race to the Top. I restored as much local control as I can, but I suspect that’s going to be an uphill fight moving forward. There’s a regrettable tendency to want to federalize everything. I am optimistic, however, based on how Congress handled the CARES Act. We’ve shown block grants to states make sense, and I hope that’s something people continue to look at and advance.

Hess: When it comes to Covid-19 and the pandemic that’s upended the nation and the world of education this year, what do you think schools have gotten right? What do you think they’ve gotten wrong?

DeVos: The answer to that question depends on where the schools are located and on school leadership. I’ve toured public, private, and parochial schools across the country that have safely reopened for in-person learning. Their leaders have can-do, get-it-done attitudes, and they put doing what’s best for students ahead of any other interests. At the same time, we’ve seen some of America’s largest districts refuse to open, not based on the recommendation of scientists, but because of political interests.

Hess: What would you advise the new Congress and the next secretary of education to do next when it comes to Covid-19 and education?

DeVos: Where Congress is concerned, keep taking excuses off the table that are preventing kids from learning. The learning loss that is happening right now is a national tragedy that will have long-lasting and far-reaching consequences. We’ve sent PPE, test kits, masks, and billions of dollars to schools already. I’d also remind Congress that students are who matter, and which building they go to school in shouldn’t matter when it comes to supporting them through the pandemic. As for my successor, I’d emphasize that parents today are more aware of what their children are—or are not—learning. And they’re more aware of who’s standing in the way. More than ever before, they are raising their voices for more options, for more choices, for freedom. The need for education freedom is especially acute for kids whose government-assigned schools are refusing to open—and those families should be able to take their education dollars to schools that will.

Hess: More broadly, what’s the most important piece of advice you’d give your successor?

DeVos: There’s one simple guiding principle I’d urge not just the next education secretary to embrace, but any educator and education leader: Put students first. When doing what’s right for individual students is your number-one priority, everything else becomes much clearer.

Hess: Last question. Looking ahead, what’s next for you?

DeVos: I haven’t focused much on that yet, but it’s safe to say I’ll be very much in the fight for students. For so many families, the pandemic has laid bare the flaws in the education system, and so many students have been harmed as a result. The timing and need for big reforms have never been greater.

Frederick Hess is director of education policy studies at the American Enterprise Institute and an executive editor of Education Next. AEI has received funding from DeVos family foundations.