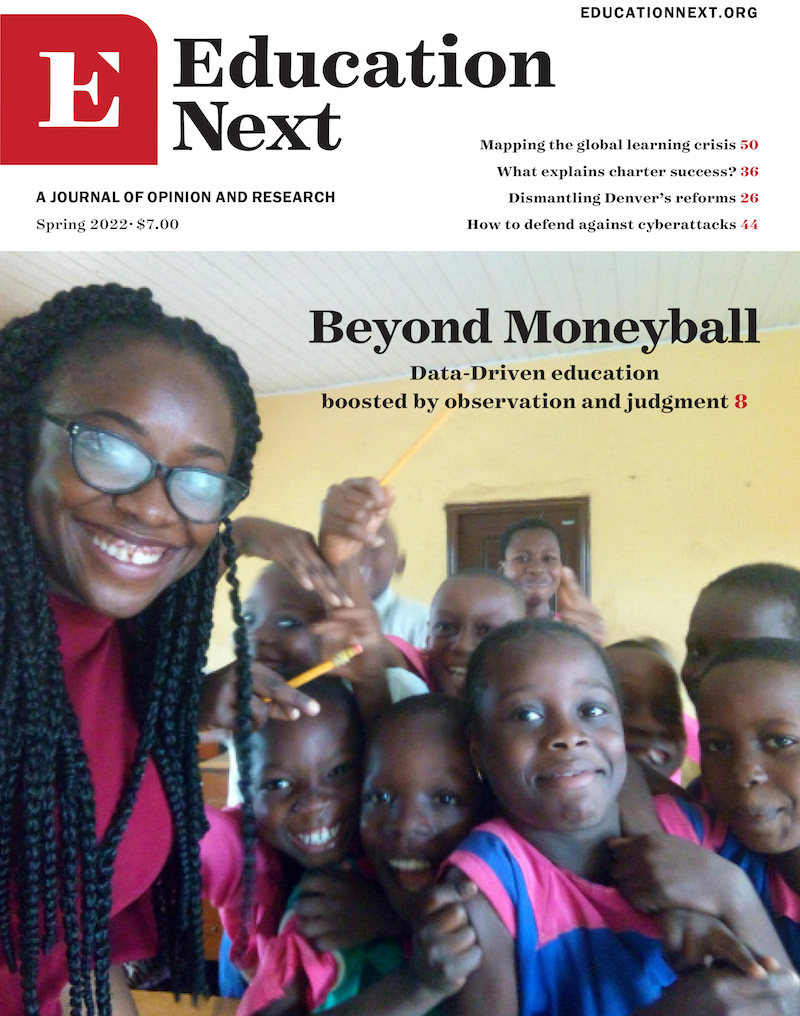 The cover article in the Spring 2022 issue of Education Next reported on Bridge International Academies, which enroll more than 800,000 students in five countries.

In the article, Beyond Moneyball: Data-Driven Education Boosted by Observation and Judgment, Mike Goldstein writes, “When taking on a new education venture that you intend to evaluate, reach out to top-notch economists who can measure your results through a randomized controlled trial.”

“The external evidence on Bridge suggests that the learning gains are real and large. I believe future external evidence will bolster these claims, perhaps in a jaw-dropping way,” Goldstein, and adviser to Bridge International and the founder of Match Education in Boston, wrote.

The “future external evidence” is now in. How your jaw responds is up to you.

In a new working paper from the Becker Friedman Institute for Economics at the University of Chicago, five scholars, including a Nobel laureate in economics, report that “enrolling at Bridge improves student learning.”

Pre-primary students “gained 3.48 equivalent years of schooling, an additional 1.48 years compared to pupils enrolled in other schools,” the study found.

“Beyond the specific case of Bridge, this study shows that attending schools delivering highly standardized education has the potential to produce dramatic learning gains at scale, suggesting that policymakers may wish to explore incorporation of standardization, including standardized lesson plans and teacher feedback and monitoring, in their own systems,” the researchers wrote.

The schools are oversubscribed, so the researcher were able to measure the treatment effect of winning a lottery for a scholarship to attend.

The researchers ascribe the gains to the standardization of Bridge, which they, and a Bridge co-founder, liken in some ways to McDonald’s fast-food franchise restaurants. “Our results suggest that policymakers may wish to explore incorporating more structure and standardization into their education systems. Since the effects of standardization in education could vary between public and private schools, as well as with local circumstances and implementation, careful evaluation of efforts to introduce more structure into public education systems would be needed,” they write.

The paper has precise details about the particular things Bridge standardizes, down to classroom design. “The side of the classroom with the door features an open window that spans the length of the classroom so that an observer standing outside the classroom can observe whether a teacher is in a classroom and teaching.”

The paper also reports that after the study was conducted, “Bridge’s parent company, New Globe, shut down most of its private schools in Kenya and now overwhelmingly works as a service provider to governments operating public schools.”

Goldstein himself has an additional Education Next post about Bridge and the survey findings—written, time-capsule style, in advance of their release—available now.