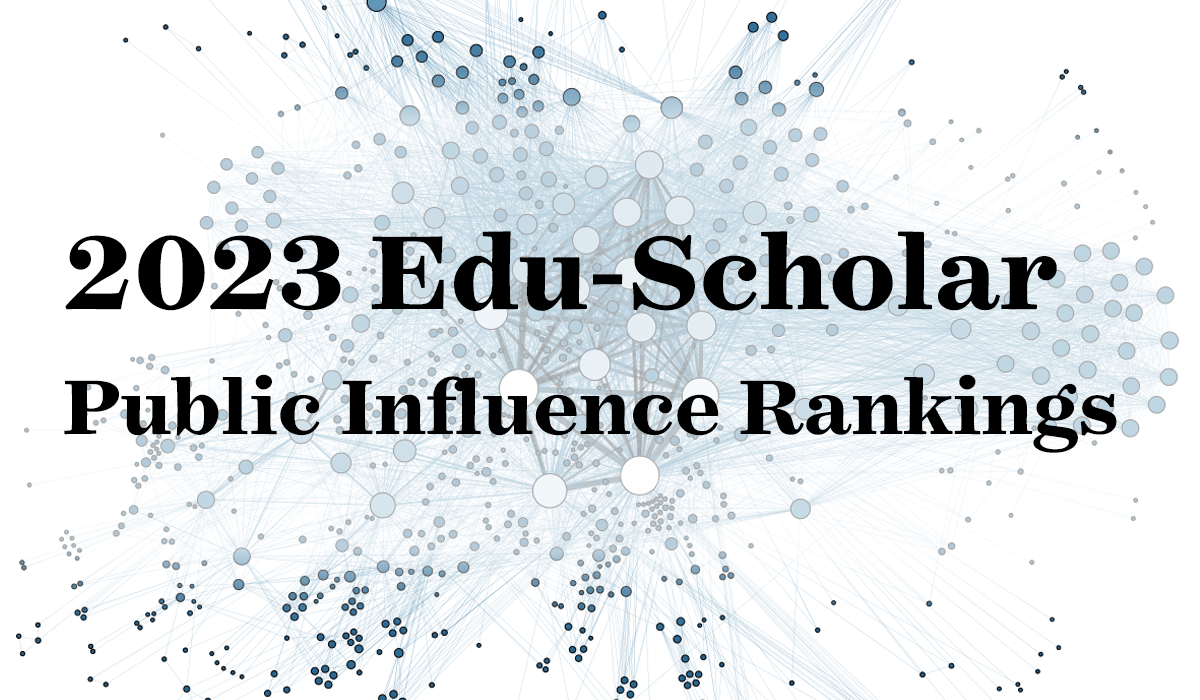 Today, we unveil the 2023 Edu-Scholar Public Influence Rankings, ranking the university-based scholars in the United States who did the most last year to shape educational practice and policy. Simply making this list of 200 scholars is noteworthy, given the 20,000 or more who might qualify. The list includes the top finishers from last year, augmented by nominees chosen by the 28-member Selection Committee (see yesterday’s post for more on the committee, the selection process, and all the salacious methodological particulars).

Without further ado, here are the 2023 rankings (scroll through the chart to see all names and scores). Please note that all university affiliations reflect a scholar’s institution as of December 2022.

The top scorers are all familiar names to those who spend much time around education. Topping the rankings this year was University of Southern California’s Pedro Noguera. (Full disclosure: Noguera and I co-authored A Search for Common Ground in 2021 and just wrapped up our “Common Ground” podcast this fall.)

The rest of the top five were, in order, U. Penn’s Angela Duckworth (Full disclosure: Duckworth blogs for Education Week); Stanford’s Jo Boaler; USC’s Shaun Harper; and Stanford’s Linda Darling-Hammond (recipient of this year’s Yidan Prize for Education Research). Rounding out the top 10 were Columbia’s John McWhorter (in the first year he was included by the Selection Committee); Harvard’s Howard Gardner; Brown’s Emily Oster; Stanford’s Carol Dweck; and the University of Virginia’s Daniel Willingham.

When it comes to the most popular books penned by the Edu-Scholars, Dweck’s Mindset: The New Psychology of Success continues to top the charts—17 years after its initial publication. Other books that fared especially well were Emily Oster’s Expecting Better: Why the Conventional Pregnancy Wisdom Is Wrong—and What You Really Need to Know (2014); Angela Duckworth’s Grit: The Power of Passion and Perseverance (2016); Richard Rothstein’s The Color of Law: A Forgotten History of How Our Government Segregated America (2018); Christopher Emdin’s For White Folks Who Teach in the Hood (2016); and Gholdy Muhammad’s Cultivating Genius: An Equity Framework for Culturally and Historically Responsive Literacy (2020). Remarkably, these are the same six books that held the top spots for the past two years.

Now, if readers want to argue the construction, reliability, or validity of any or all of these metrics, feel free. (And, of course, never forget that individuals can exert influence in destructive ways). This whole endeavor is an imprecise, highly imperfect exercise. Of course, the same is true of college rankings, NFL quarterback ratings, or international scorecards of human rights. Yet, for all their imperfections, such efforts convey real information and help spark useful discussion. I hope these can do the same.

Tomorrow, we’ll break down the top 10 faculty in each discipline and highlight the top five junior faculty.