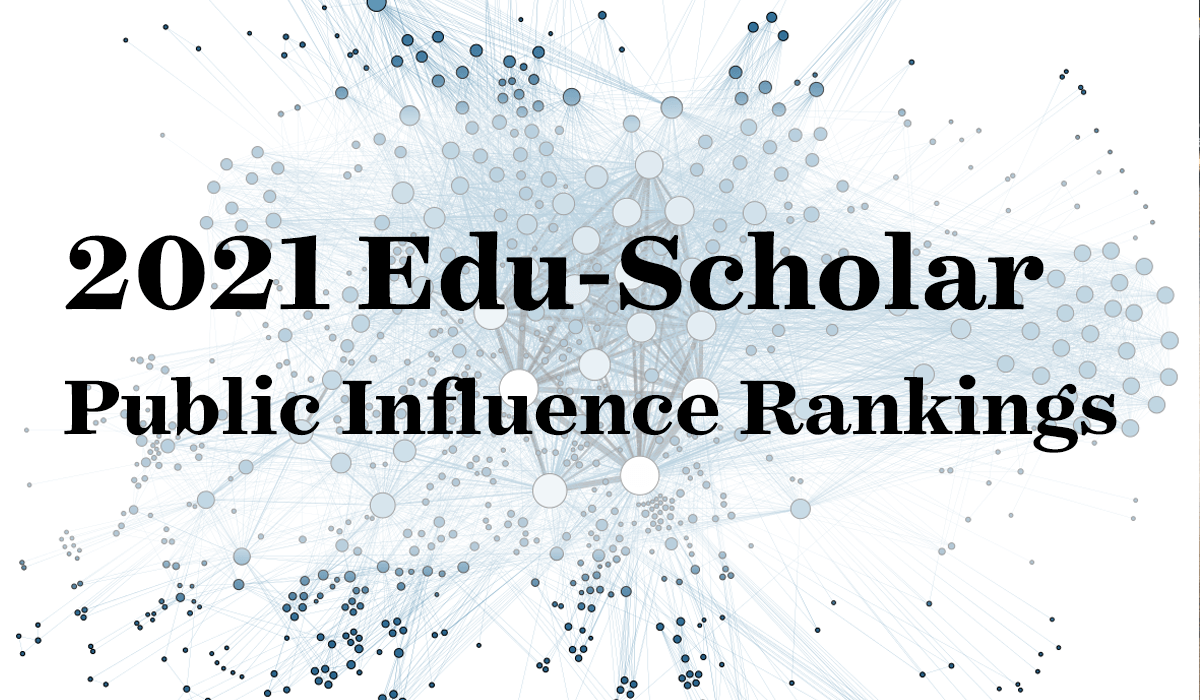 Today, we unveil the 2021 Edu-Scholar Public Influence Rankings, ranking the university-based scholars in the U.S. who did the most last year to shape educational practice and policy. Simply being included in this list of 200 scholars is an accomplishment, given the 20,000 or more who might qualify. The list includes the top finishers from last year, augmented by “at-large” nominees chosen by the 28-member Selection Committee (see yesterday’s post for a list of committee members, an explanation of the selection process, and all the salacious methodological particulars).

Without further ado, here are the 2021 rankings (scroll through the chart to see all names and scores). Please note that all university affiliations reflect a scholar’s institution as of December 2020.

Stanford placed two scholars in the top five and five in the top 20. Harvard, USC, the University of Virginia, and the University of Pennsylvania all had multiple scholars in the top 20. In terms of overall representation, Harvard led with 25 ranked scholars; Stanford was second, with 17; and Columbia and UCLA tied for third, with 13 each. All told, 62 universities had at least one ranked scholar.

When it comes to the bestselling books penned by the top 200 scholars, Dweck’s Mindset: The New Psychology of Success continues to top the charts—15 years after its initial publication. Other books that fared especially well were Angela Duckworth’s Grit: The Power of Passion and Perseverance (2016), Richard Rothstein’s The Color of Law: A Forgotten History of How Our Government Segregated America (2018), Jonathan Zimmerman’s The Amateur Hour: A History of College Teaching in America (2020), and Christopher Emdin’s For White Folks Who Teach in the Hood (2016). Remarkably, aside from Zimmerman’s volume, these are the same books that held the top spots last year. I always find this set of titles a particularly revealing window into the state of the education conversation.

Now, if readers want to argue the construction, reliability, or validity of any or all of these metrics, feel free. This whole endeavor is an imprecise, highly imperfect exercise. Of course, the same is true of college rankings, NFL quarterback ratings, or international scorecards of human rights. Yet, for all their imperfections, such efforts convey real information and help spark useful discussion. I hope the same is true here.