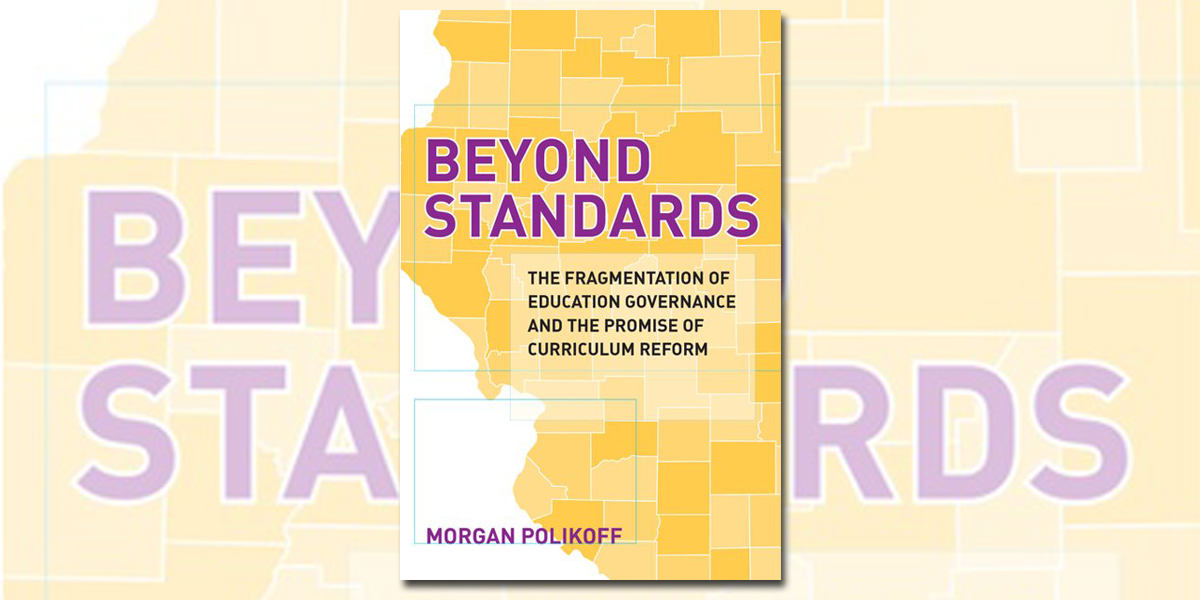 Beyond Standards: The Fragmentation of Education Governance and the Promise of Curriculum Reform
by Morgan Polikoff
Harvard Education Press, 2021, $60; 192 pages.

As reviewed by Natalie Wexler

The many education reformers who have relied on academic standards to boost student achievement might outline their theory as follows: States broadly define what students should know and be able to do at specific grade levels. Publishers use these standards to create detailed curricula, which districts adopt. Teachers receive training in the standards’ requirements. Students’ progress is tracked by standards-based assessments. And educators are held accountable for the results. The expected outcome: markedly higher student achievement and a narrowing of racial and income-based gaps.

In Beyond Standards, Morgan Polikoff demonstrates that this theory hasn’t matched reality. He argues that standards are inherently too vague to enable teachers to arrive at a common or accurate understanding of what they need to teach or to identify the right materials for teaching it. Polikoff also points to decentralized governance as a problem. With over 13,000 school districts in the United States, he argues, it’s impossible to provide all students with a standardized educational experience.

Polikoff pins his hopes for improvement in K–12 education partly on high-quality curriculum rather than standards. As he notes, studies have shown that the effect of a high-quality curriculum on student outcomes can be as strong as the effect of having a veteran rather than a novice teacher. He also supports a more active role for states. Citing Louisiana as an example, he argues that states should identify or create high-quality curricula and exercise greater control over decisions typically left to districts, schools, or individual teachers (see “Louisiana Threads the Needle on Ed Reform,” features, Fall 2017). Polikoff even urges states to mandate that districts adopt curricula from among a limited set of state-approved options.

That aspect of his reform prescription is more problematic. As Polikoff is aware, the idea of state-mandated curriculum flies in the face of a strong American tradition of local control. Some states—20 or 25 by his estimate—issue lists of approved curricula or textbooks, but none require districts to use those on the list. In the other states, curriculum decisions are left entirely to districts. When Polikoff advised one state’s education leaders simply to collect data on which curricula districts were using, they protested that “district folks would freak out and assume the state was trying to usurp their authority over teaching and learning.”

Beyond the logistical or political obstacles, though, it’s not clear states can be relied on to make good curriculum choices—especially in the area of literacy. Polikoff argues that decentralization has led to a plethora of curricular approaches, but there is a standard approach to literacy, referred to as “balanced literacy.” While curricula vary in some respects, most of the commonly used ones fail to guide teachers effectively in teaching phonics, an area where their training is often deficient. And almost all emphasize reading comprehension skills and strategies, such as “finding the main idea” or “making inferences.” Students practice the skills on “leveled texts”—books on various topics that they can read easily and that may be well below their grade level. Polikoff doesn’t specifically address either component of this widespread approach.

When he refers to high-quality literacy curriculum, he seems to have in mind a handful of newer curricula grounded in evidence that many children need systematic instruction in phonics to read fluently and that comprehension depends far more on academic knowledge than “skill.” These curricula put content in the foreground and go deeply into topics in social studies and science. Although they haven’t been studied as much as math curricula, the evidence on their effectiveness that does exist is promising.

But will state decisionmakers gravitate to these newer curricula or stick with what’s familiar? Polikoff seems to assume they’ll opt for the good stuff if they involve teachers in the adoption process and rely on guidance from organizations like EdReports, which rates curricula according to their alignment to Common Core standards. Teachers, though, may prefer to work with what they’re used to. And although EdReports ostensibly includes knowledge building as one of its criteria—and although the organization has rated several knowledge-building curricula highly—it has made some puzzling decisions of late.

For example, EdReports gave its highest rating to McGraw-Hill’s Wonders, one of the 10 most popular reading programs. But a recent critique by Student Achievement Partners, which evaluates curricula for how well they align with research evidence, found that Wonders is overstuffed, fails to spend enough time on some foundational skills, lacks coherence, and doesn’t build content knowledge systematically.

It’s not hard to imagine a state being misled by guidance from EdReports. In fact, that may have already happened in Florida, where the state’s new standards profess to value knowledge over reading-comprehension skills. Strangely, the recently announced state adoption list failed to include any of the curricula that focus on building knowledge but did include Wonders, along with some other lower-quality options. At the same time, several Florida districts had already conducted their own reviews and chosen actual high-quality curricula, only to find that the state later failed to recommend them.

In the abstract, Polikoff’s prescription makes sense: why not have 51 decisionmakers rather than 13,000? We might even wish we could have just one, like the many developed countries that have national curricula. But centralizing the decisionmaking process only makes sense if the decisionmakers understand what they’re doing. In Louisiana, curriculum adoption at the state level worked because of a visionary state superintendent of education, John White. There may be others like him, but at this point we can’t count on one being at the helm of every state department of education—or even most of them.

I agree with Polikoff that standards-based reform hasn’t worked—and in the case of literacy standards, which reinforce the mistaken notion that reading comprehension is primarily a set of skills, I think we would be better off without them. But weaning schools away from what’s familiar and toward what’s aligned with science will unfortunately take a lot more than jettisoning standards and giving authority over curriculum to the states.

Natalie Wexler is an education writer and author of The Knowledge Gap: The Hidden Cause of America’s Broken Education System—And How to Fix It.

This article appeared in the Fall 2021 issue of Education Next. Suggested citation format:

Wexler, N. (2021). A Sharp Critique of Standards-Based Reform: Polikoff pins his hopes on high-quality curricula selected by the states. Education Next, 21(4), 76-77.