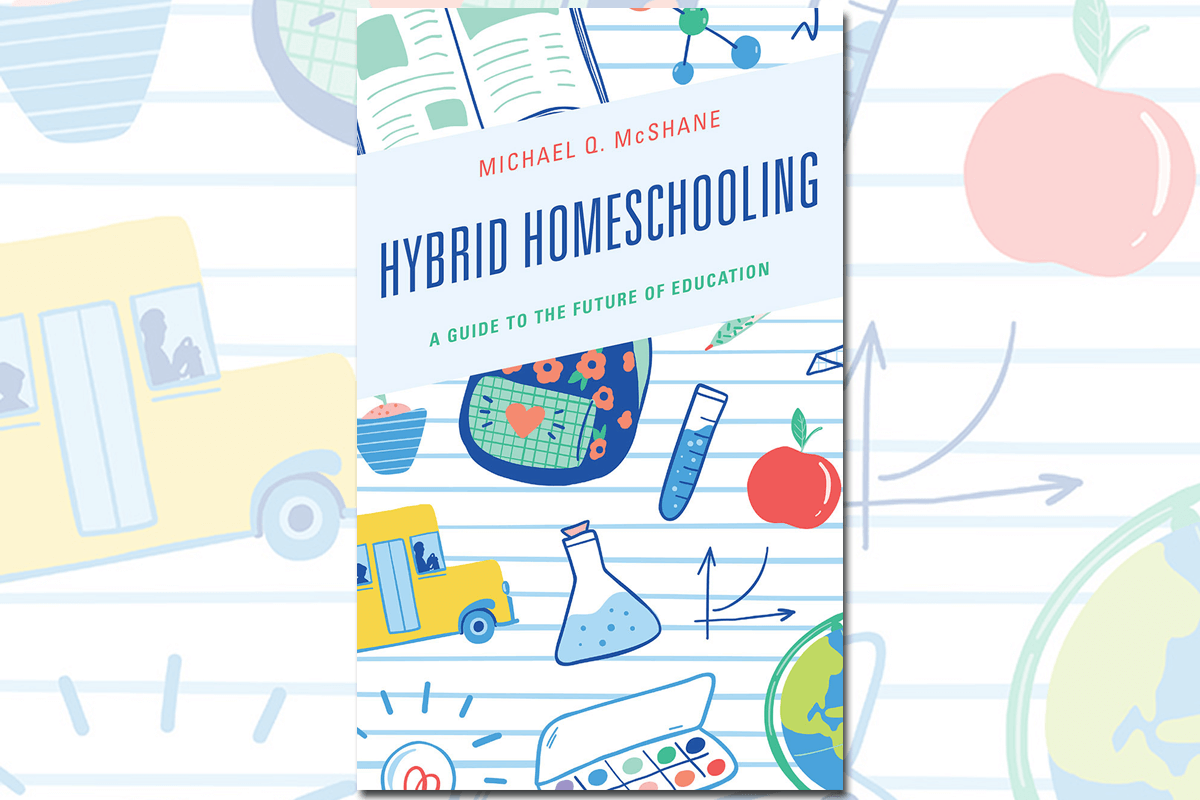 Hybrid Homeschooling: A Guide to the Future of Education
by Michael Q. McShane
Rowman & Littlefield, 2021, $60; 142 pages.

As reviewed by Michael B. Horn

Hybrid learning and homeschooling have become prominent models over the past school year as millions more students learned from home, whether part or full time, during the coronavirus pandemic.

Against that backdrop, Mike McShane’s new book, Hybrid Homeschooling, would seem both topical and timely.

It is both of those things, but not for reasons directly related to the pandemic or the various phenomena of blended and remote learning that became so widespread in much of the country beginning in March 2020.

At first glance, this concept might not seem to differ much from the enriched virtual-school models that have emerged over the past 15 years—schools in which students learn in person for a portion of the week and remotely online for another part of the week—or even schools in which students learn in person five days a week and learn at home during off hours. The big difference, McShane writes, lies in the definition of homeschooling, Hybrid homeschoolers have an education that is at least “partially controlled by parents, is partially provided by their parents, and takes place in the home for part of the school week. . . . The arrangement must meet three criteria: physical, regular, and substantial.”

The book serves ultimately as a survey-level primer on this phenomenon, which is an important one to understand because hybrid homeschooling may make homeschooling and school choice more accessible to millions of families in the years ahead. As McShane documents, prior to the pandemic, 10 percent of parents indicated a desire to home-school their children “if money or logistics” were no object. According to a February 2021 survey by EdChoice, where McShane is director of national research, 44 percent of parents would prefer a mix of home- and school-based education in the future—and, assuming hybrid homeschooling is available, parents in the original 10 percent are more likely to find a way to continue to home-school in the years ahead.

McShane leads into his primer with a brief but comprehensive summary of the research and the state of homeschooling more generally. As he documents, homeschooling has been on the rise since 1970, when “there were fewer than fifteen thousand homeschool students throughout the United States.”

Since then, he argues, it’s come “roaring back,” which is hard to dispute given that in 2016, according to the National Center for Education Statistics, 1.69 million students—or 3.3 percent of the schooling population—were home-schooled, up from 850,000 in 1999.

What McShane doesn’t mention is that the NCES estimate peaked at 1.773 million in 2012. Granted, the data are weak on the true numbers of students who are home-schooled, because of the wide variability in state policy relating to the practice—which McShane does a good job of summarizing—yet it seems clear that prior to the pandemic, the growth of homeschooling had plateaued. Although McShane shows evidence based on state-level data that the numbers may have started to rise again into 2019, homeschooling hadn’t been growing nearly as fast as its advocates like to assert.

Then again, what makes hybrid homeschooling so intriguing is its potential to make homeschooling more accessible to families by, for example, reducing costs or eliminating parents’ logistical challenges around childcare.

After reviewing studies on the effects of homeschooling and considering the views of its detractors, McShane concludes that it’s not possible to assert that homeschooling has a positive effect on academic achievement or social development, but it’s also clear that students who are home-schooled “run little risk of academic or social harm.”

The book provides a series of compelling case studies of families and educators who have made the leap into hybrid homeschooling. Each chapter begins with a story that illustrates a particular aspect of homeschooling and chronicles the experiences of parents, families, educators, and regulators. These stories serve to humanize the sometimes wonky details that McShane explores throughout.

There’s the story, for example, of a family whose children are enrolled in the Classical Christian Conservatory of Alexandria, Virginia, where the mother, Kristin Forner, is on the front lines of fighting Covid-19 as an anesthesiologist and palliative-care physician.

Forner told McShane that “we are not a typical homeschooling family,” as both she and her husband were educated in public schools and were not particularly excited about homeschooling at first. But they were drawn to the model because they wanted a classical, Christian education for their children, and there weren’t many schooling options around that fit the bill. When they realized they could afford the conservatory and that their children would learn at home two days a week, the benefits became clearer: quality time with their children, more time for creative play, greater transparency into what their children were learning, and the opportunity to teach controversial subjects on their own terms.

What emerges from the stories is an empathetic portrait of the individuals who choose to engage in hybrid homeschooling—and a realization of how diverse those individuals are.

McShane argues that families choose hybrid homeschooling for four primary reasons: the gift of time, personalization, being involved together in education, and mental health.

As for educators, they choose to participate in hybrid models for many of the same reasons, but also to create a stronger community than they could in a public school. That said, McShane describes the drawbacks to teaching in a hybrid homeschool environment—compensation chief among them—that for now will likely limit the numbers of educators who can commit to such schools.

One of the most interesting chapters provides a summary of policy on homeschooling. The chapter covers the various ways in which states treat homeschoolers and the challenges, inherent in models that aren’t built around seat time, of circumventing time-based Carnegie Unit requirements. It also highlights the opportunities to innovate that hybrid homeschooling affords public-school leaders when they choose to participate rather than fight those who opt for homeschooling. The public-school educators McShane chronicles come across as cage busters redefining the educational experience in positive ways. Kentucky’s superintendent of the year, Brian Creasman, from Fleming County Schools, for example, seized the opportunity to enroll hybrid homeschoolers in mastery-based programs and at last take advantage of the state regulations that waive the Carnegie Unit—regulations that were “staring at us in the face.”

Where the book most misses the mark is in the innovation chapter, which feels forced and a bit too academic. The discussion of design thinking in hybrid homeschooling isn’t so much wrong as it is stilted and too brief to resonate. And the use of Everett Rogers’s diffusion-of-innovation curve—a model that attempts to show the rate at which new ideas and technologies spread—feels premature at best. As a whole, the chapter reads like a needless add-on to an otherwise robust discussion of the growing hybrid-homeschooling phenomenon.

I would have preferred to see McShane explore how the funders that are looking for ways to reinvent schooling through entrepreneurship and innovation might exploit—or perhaps already are exploiting—hybrid homeschooling to help produce larger-scale changes in the aftermath of the pandemic. For funders looking for ideas, there are plenty of inspiring innovators and entrepreneurs in this book who may hold the keys to a bigger rethinking of how education has to work in this country. McShane’s volume is a great place to start.

Michael Horn is an executive editor of Education Next, co-founder of and a distinguished fellow at the Clayton Christensen Institute for Disruptive Innovation, and a senior strategist at Guild Education.