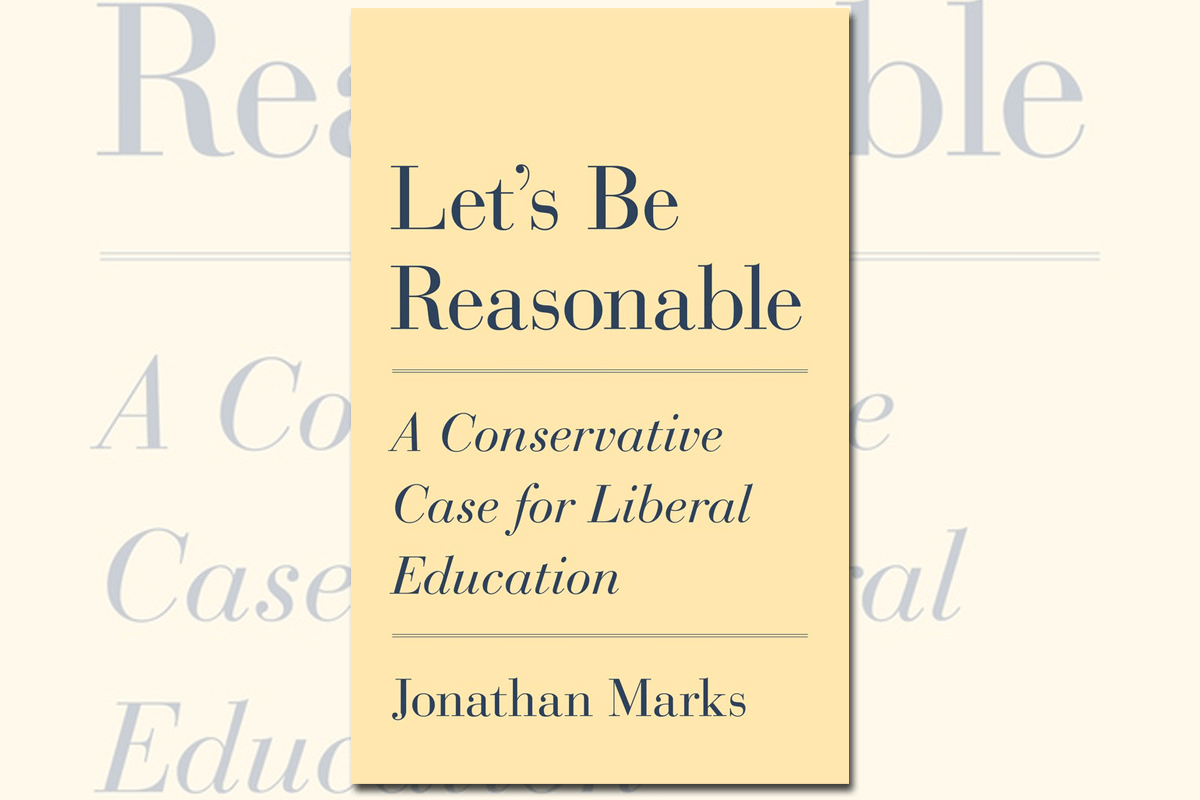 As reviewed by J. Grant Addison

In Let’s Be Reasonable, Jonathan Marks argues that higher education should rededicate itself to the project of liberal education. Taking his cue from John Locke, Marks describes the aim of liberal education as creating a certain type of person: that is, a reasonable one. “Reason,” as opposed to syllogism or simple debate, is both a habit of mind and a standard to hold while pursuing truth. “Our way of talking captures the sense, still alive in us despite the resolute unseriousness of public speech, that reason is not only an authority but also the kind of authority that is an honor to obey and a disgrace to betray, the sense that there’s such a thing as conduct unbecoming a reasoner,” he writes. Through study of great books and guided engagement with an academic community, liberal education seeks to “answer the question of what we are and what the best way of life is.”

His apologia for an intentional liberal education focused on molding reasonable citizens is welcome, and often stirring. Marks bolsters his argument with insights from Locke, Jean-Jacques Rousseau, Alexis de Tocqueville, and others, and he frames much of his case for higher education’s potential in constructive “conversation” with previous critiques such as Allan Bloom’s The Closing of the American Mind, Patrick Deneen’s Why Liberalism Failed, and Jonathan Rauch’s Kindly Inquisitors.

He opens the book by differentiating his understanding of a liberal education—one that produces reasonable people—from the bland, diffuse label that is casually tossed around by so-called liberal arts colleges and academic associations that are otherwise unable to state with clarity what the true aim of liberal education is. “Adjectives, like integrative, interdisciplinary, interconnected, entrepreneurial, twenty-first century, complex, dynamic, and problem-solving, are distributed among brochures as if at random to make it appear that something buzzy is going on,” he gently mocks. Marks then moves on to talking about academe’s critics, on both the right and the left, from within higher education and from without, and why he feels they are both wrong.

The real meat of the book comes in Chapters 3 and 4, where Marks thoroughly presents his case for a liberal education dedicated to reasonableness and then the process and importance of shaping students with this aim. Here Marks is at his best, putting on his professor’s hat to dip in and out of historical background and offer up discussion of political theory in an engaging, almost lecture-like style. The chapter-length look into the current generation of college students, which uses a mix of survey data, expert analysis, and anecdata, provides a useful note of humility for those of us engaged in such discussions about higher education. “We professors know less than we think we know about our students,” he admits.

Given the political and ideological polarization that has engulfed higher education and all discussion of it over the past decade, it is heartening to read a case made in optimism. Yet Let’s Be Reasonable often undersells legitimate criticisms that can be levied at colleges and universities even as it ignores more serious, structural impediments to his vision of academic renewal. Indeed, in the book’s final chapter Marks offers a lengthy analysis of the Boycott, Divestment, and Sanctions, or BDS, movement against Israel as a case study of problematic left-wing campus activism and the need for reason. The organized campaign of viewpoint discrimination and personal harassment he describes paints a picture far closer to the right-wing critique of leftist colleges and universities than Marks allows.

While I have no reason to doubt Marks’s non-combative experience as a conservative professor, survey data consistently reveal that a sizable portion of conservative students and faculty members feel some form of hostility from their peers because of their ideological or political views. Among right-leaning academics in the United States and Canada, 70 percent of respondents said they experienced a “hostile departmental climate” because of their views, according to a survey released in March 2021 by the Center for the Study of Partisanship and Ideology.

At times, this hostility to heterodoxy in academe can calcify until disagreement is foreclosed and open inquiry is sacrificed to the party line. In fall 2020, for example, the American Educational Research Association and the National Academy of Education issued a “Joint Statement in Support of Anti-Racist Education,” endorsed by 16 scientific societies, which instructed that researchers “must stand against the notion that systemic racism does not exist.” Case closed, debate over.

Largely absent from Marks’s case is discussion of the permanent and ever-expanding administrative bureaucracy on college and university campuses. In Chapter 1, Marks recounts how, in 2015, administrators at Harvard University gave out “Holiday Placemats for Social Justice” to serve as crib sheets for undergraduates who might want to browbeat their less-woke family members over the holidays. Marks points out that several Harvard undergraduates openly criticized the move, anecdata he uses to make the argument that not all college students fit the caricature of coddled “crybullies.” All well and good; he’s right about that. What he overlooks, though, is that the placemat project was administrator-driven.

For all the ink spilled about potential indoctrination by leftist professors (largely a specious claim), it is administrators and campus bureaucrats who make up the most ideologically biased group in academe—a group that makes major decisions related to collegiate life and campus mores. As my former American Enterprise Institute colleague Samuel J. Abrams found from conducting a survey of about 900 “student-facing” administrators, “liberal staff members outnumber their conservative counterparts by the astonishing ratio of 12-to-one.” It is most often these campus mandarins, particularly those in positions related to offices of “diversity, equity, and inclusion,” who interfere with the academic enterprise and threaten the idea of liberal education.

Also missing from Marks’s defense of liberal education is a real acknowledgment of the labor-market realities underpinning our higher-education system. Unfortunately, higher education has become for a great many Americans principally a toll—a credential that must be purchased to become eligible for higher-paying employment. A recommitment to liberal education with a core curriculum that focuses largely on the “Great Books” would be a worthy recalibration for many colleges, but need it be the pathway for all of them? Perhaps a more effective move would be to reestablish institutional diversity and differentiate between liberal arts colleges, research universities, and vocational programs while making it easier for students to acquire the skills and credentials they need to progress more quickly (and cheaply) to the workforce.

In the end, Marks’s case for a reason-oriented liberal education is likely altogether too reasonable a goal to accomplish. But, as he writes in his preface, “there are worse things to do than to go down swinging.”

This article appeared in the Summer 2021 issue of Education Next. Suggested citation format: