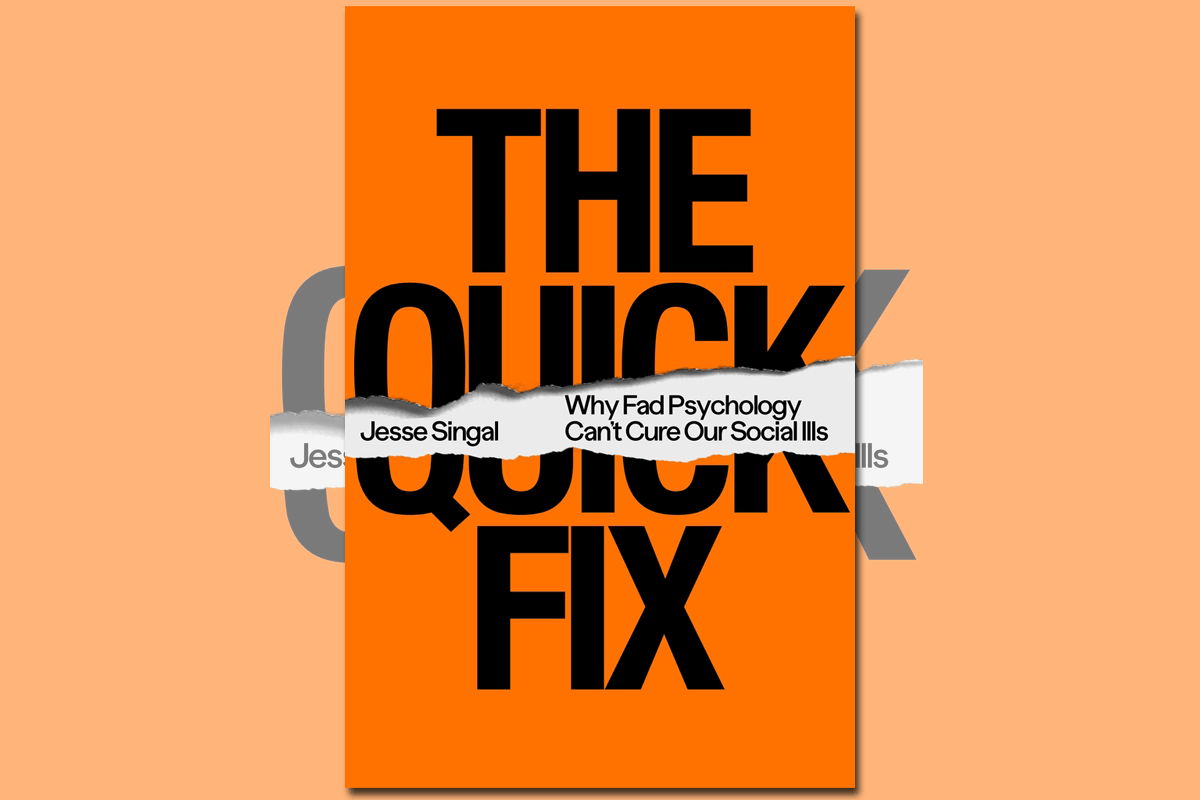 Jesse Singal’s new book, The Quick Fix, is an impressive display of social-science journalism. Singal manages to describe complicated and technical issues accurately and with nuance, a feat rarely achieved by researchers, let alone journalists. The book focuses on six niches of social-science study that over the past few decades have had widespread influence on policies and practices beyond the narrow confines of academia. He takes on the self-esteem movement, the “superpredator” theory in criminology, the use of “power posing,” positive psychology, grit, and the implicit association test for unconscious racial bias.

It would be too strong to say that Singal “debunks” the findings that drew attention to these six topics, but he does critique them and is particularly skeptical of claims that interventions or policies generated from these areas of study have the potential to significantly alter outcomes in real-world settings. He acknowledges the extent to which research supports such claims but points out the limited quality of that research, asserting that it is often so contingent on specific contexts that it does not apply more broadly.

For example, in the chapter on self-esteem, Singal discusses Carol Dweck’s ideas about growth mindset, the belief that academic performance can be altered through personal effort. He acknowledges that a large randomized experiment published in Nature by Dweck and two dozen co-authors found that a “mindset intervention . . . does appear to have some effects. . . . If this research holds, it could be argued that mindset interventions do offer a minor but legitimate boost to a subset of otherwise academically vulnerable students—a boost that is at least somewhat related to self-esteem.” His critique is not that self-esteem ideas are fundamentally mistaken, but that they have been grossly oversold and misapplied in contexts well beyond what can be supported by rigorous research.

Singal similarly concedes that a positive-psychology intervention, the Penn Resilience Program, or PRP, has had positive results: a study “found that while the PRP did appear to reduce depressive symptoms among students exposed to it, those reductions were small, statistically speaking.” In the chapter on grit, Singal notes that “both conscientiousness and grit do appear to be correlated with school performance—somewhat.” And in the chapter on the implicit association test, or IAT, to measure unconscious racial bias, Singal writes “there does appear to be a statistically significant correlation between IAT scores and behavior observed in studies; it’s just so small as to likely be meaningless in the real world.” Singal expresses plenty of reservations about how robust all of these research findings are, but he does not accuse their proponents of manufacturing false results. His real concern is about the use of these findings to attempt to shape and improve individual behavior in any meaningful way, especially on a mass scale.

If the main problem that Singal is identifying is one of overhyping and misapplying social-science research, it is unclear how much of the responsibility lies with researchers or others. Singal is inclined to place a fair amount of the blame on the researchers, who are drawn by the attention and resources that overhyped research can generate. This view does not seem entirely fair, given the extent to which politicians, foundations, reporters, and the general public are willing to lavish attention and resources on whichever researchers will confidently claim that they have consulted with the oracle of social science and divined guidance for how we should structure policy and live our lives. Education reform has especially suffered from this cultlike devotion to claims generated by social science, ignoring the glaring weakness of most social-science research while dismissing the useful insights of wisdom and experience.

The corruptibility of researchers is a problem, but that’s only part of the story—especially because in several chapters we learn that the researchers recanted their findings or otherwise attempted to temper misuse of their work. For example, in the chapter critiquing the 1990s-era claim that the country was facing an alarming rise in superpredator criminals, Singal notes that the main proponents of that theory later abandoned their claims, even authoring a U.S. Supreme Court amicus brief to rebut them. In the chapter on “power posing” as a strategy for advancing women’s careers, Singal reveals that one of the authors of the original study later posted a statement on her faculty website, underlined and in bold, saying, “I do not believe that ‘power pose’ effects are real.” In the chapter on enhancing grit to improve student success, Singal concedes that Angela Duckworth, who developed the concept, tried but failed to contain the misuse of her findings: “To her credit, Duckworth has been significantly more candid and transparent than other researchers who have found their ideas under scrutiny, and she has been generally open about the limitations of the research. . . . Duckworth has expressed frustration at the fact that she had, to a certain extent, lost control of the grit narrative.”

There is a larger story here, which Singal does not fully develop, about why we as a society invest an unreasonable amount of authority in social science. He hints at this in his concluding chapters about the implausibility that priming, nudges, and other subtle interventions have large and predictable effects on human behavior, given how complicated and deeply rooted our motivations likely are. But he doesn’t seem to see the problem as inherent in our overreliance on social science as a guide for life. He seems to think that if only researchers preregister their studies and exercise greater care, we can avoid these abuses. He favorably quotes “the champion of replication and transparency in psychological science,” Brian Nosek, who writes that reformers have “irrevocably altered the norms and accelerated adoption of behaviors like preregistration and data sharing. Thanks to them, psychological science is in a different place today than it was in 2011. Psychology in 2031 is going to be amazing.” Singal’s cautious agreement with this optimism strikes me as naïve, especially given all of the abuses he so carefully documents in his book.

Singal accurately captures the nuance and detailed shortcomings of research but seems to struggle in discussing the bigger picture with similar skepticism. The heart of the book lies in the chapters, some of which Singal published previously as standalone articles, about the weakness and misuse of particular research claims. In cobbling this material together into a book, Singal may not have given priority to identifying the unifying themes of his chapters. A plausible conclusion he could have drawn is that while social science can shed light on human behavior and even help guide it, it is not the only or necessarily the most reliable source of wisdom on how to live our lives. That’s also what the great religious traditions and their deference to experience and past practice are about. The Enlightenment values that gave rise to the social sciences can supplement the ancient teachings but need not replace them. Given how careful Singal is, perhaps he did not want to make an overly strong argument about unifying themes for fear of extending beyond his evidence, which is reasonable but makes the volume as a whole a little less compelling than it might have been.

Jay P. Greene is a senior research fellow at the Heritage Foundation.

This article appeared in the Fall 2021 issue of Education Next. Suggested citation format: